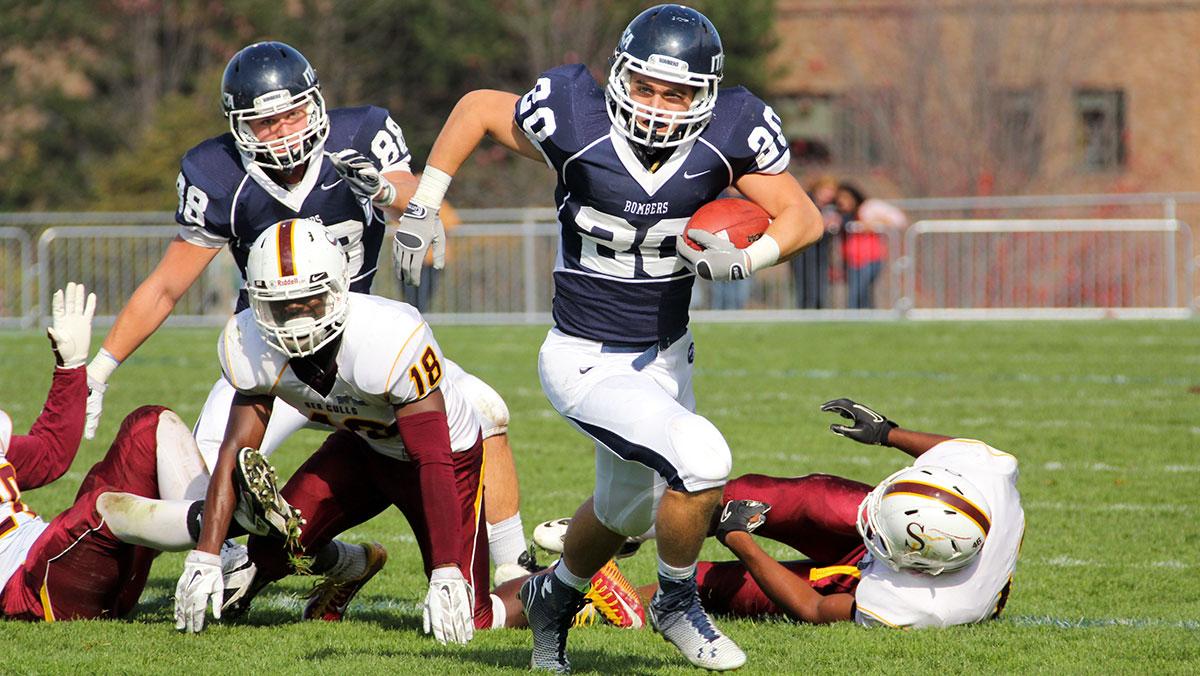 The football team shut down Salisbury University’s triple-option offense and snapped a two-game losing streak in a 32–7 win against the Sea Gulls on Oct. 25 at Butterfield Stadium.

“I’m just so stinkin’ proud of the kids,” McDonough said. “They just did an awesome job going out and executing. When you beat a team that runs that offense and was having the success they were having, it’s because the players on the field go out and do a great job.”

“The thing is [the offensive line] was opening up the run game, too. They weren’t just doing it for me,” Dempsey said. “I can’t give them enough credit.”

Sophomore wide receiver Andrew Tabbert led the Bombers with 121 receiving yards and a touchdown reception. Senior fullback Ben Cary caught nine passes and also recorded a touchdown. Dempsey said he did not have to put much thought into spreading the ball to his receivers.

“You take it one play at a time and progress through whatever the read is on a given play,” Dempsey said. “Whoever is open, that’s who I get the ball to. I have complete confidence in each and every person that’s out there.”

The Blue and Gold lost running backs, freshman Tristan Brown and senior Tommy Padula, to separate injuries during the game, and sophomore Shawahl Abdur-Rahman missed the game with a sprained ankle suffered on Oct. 18. Head coach Mike Welch said both Brown and Padula’s did not appear to be too serious. Welch credited Padula and junior running back John Iannone for handling the carries after the Bombers’ primary running backs were sidelined.

“Tommy Padula came in and did a very very solid job,” Welch said. “He’s a tough guy and he got a lot of extra yards … [same] with John Iannone. That’s guys ready to play even when you’re No. 4 or No. 3and that just shows the character of some of our players.”

With the win and Buffalo State College losing to Utica College 31–21, the Bombers remain in postseason contention and are now one game behind St. John Fisher College in the Empire 8 standings. They will travel to Brockport, New York, to take on the SUNY Brockport Soaring Eagles on Nov 1.