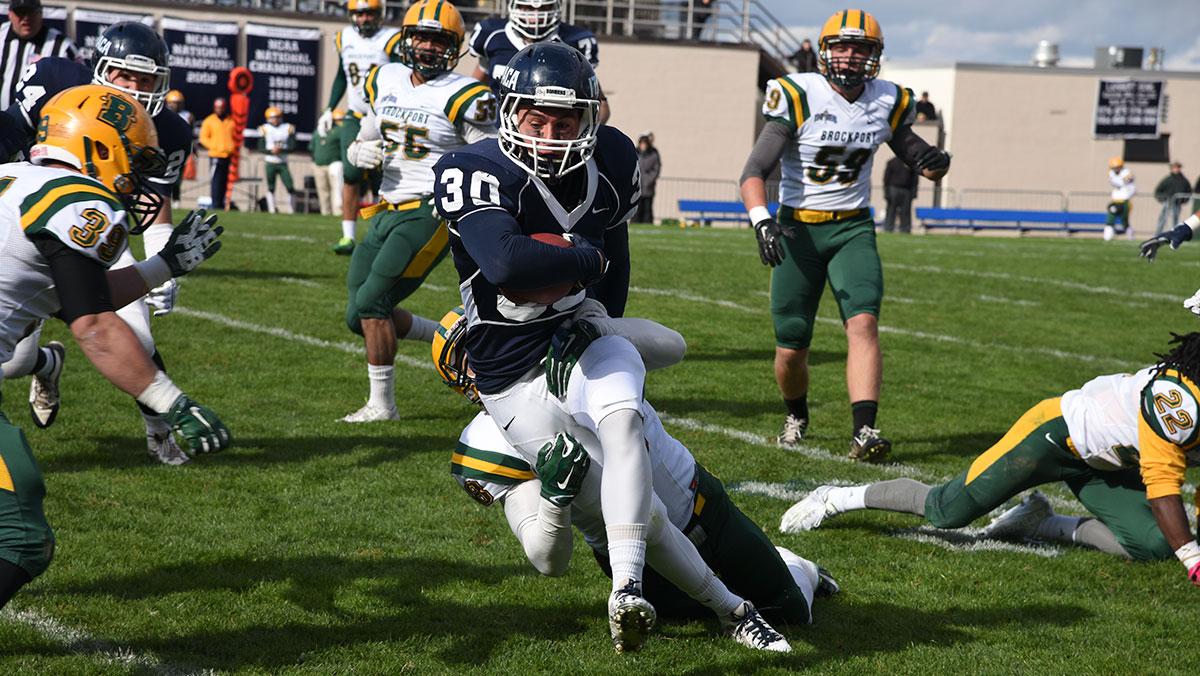 On a frigid day Oct. 17 on South Hill, the No. 24 Ithaca College football team was unable to stop the passing game of SUNY Brockport in a 27–17 defeat at Butterfield Stadium.

It was a tale of two halves for the Bombers. After two straight touchdown runs in the first half by sophomore Tristan Brown, the Bombers looked poised to win the matchup. However, the Golden Eagles seemed to convert on every play necessary in the second half in order to take a commanding two score lead late in the second half and never looked back.

Brockport senior quarterback Wayne Bonsell went 16–31 through the air for 238 yards, and though he was picked off twice, he scored four touchdowns.

With the win, Brockport is now 4–2 on the season.

Bonsell said although the Bombers’ main focus was on the rushing attack for the day, it was oversighted by Brockport’s dual threat ability.

“I think they were so focused on stopping the run that they forgot that we can throw the ball too,” he said.

The first quarter was fast-paced, but ended with no score for either team. It began with junior running back Dan Andrews taking Brockport from its own 35 to the Bombers 21.

Heading into the matchup, Andrews led Division III football with 14 touchdowns, second-most in all of college football, along with an average 173 yards per game, which was fourth in the nation.

Andrews started off the game with a bang, as he broke out for a 45-yard pickup on the first play of the game. However, soon after a big, 45-yard run, Bonsell threw his first interception of the game when the defensive front hurried him, and it was sophomore linebacker Dan Loizos who was there for the Bombers.

Toward the end of the first quarter, the Bombers’ elite defense started gaining momentum as it held the Golden Eagles inside of their own 10-yard line.

As the Bombers started from the Brockport 22-yard line, junior quarterback Wolfgang Shafer threw a 19-yard bullet down the middle of the field to sophomore fullback Brad Helmkamp. The following play, Brown punched it into the end zone as the Bombers took a 7–0 lead early in the second quarter.

As the 12:56 mark of the second quarter passed, Bosnell threw his second interception of the day when Kenny Bradley gave the Bombers good field position at the 30-yard line.

This drive took eight plays and just over four minutes, but it was Brown to rush for a 2-yard touchdown and his second touchdown of the day to put the Bombers on top 14–0 with 8:10 to go in the second quarter.

Just before the first half came to a close, Bonsell found sophomore wideout Jerry Thompson for a 5-yard touchdown with the Bombers on top of the Golden Eagles 14–7 at the half.

The second half was a complete turn for both teams as Brockport’s offense became unstoppable. Right off the bat, Bonsell threw a 71-yard bomb to sophomore wide receiver Nate Wilkinson to tie the game up at 14 with just fewer than 11 minutes to go in the third quarter.

It was the end of the period that really flattened the Bombers’ chances at victory. Bonsell picked up his third touchdown of the game when he threw a 14-yard touchdown to Wilkinson. This put the Golden Eagles on top 21–17.

Brown said he wasn’t proud of the lack of dominance the Bombers displayed in the second half.

As the Bombers were making a rally late in the fourth quarter, Shafer was sacked on a fourth and 20 to really put the Bombers in a deficit with 6:40 to go.

Shafer went 16–28 on the game with three interceptions and six sacks. The junior was unable to get anything going for his team, as the offensive line gave him limited time to get rid of the ball.

Shafer said one of things the Bombers need to do better for the remainder of the season is to make the big plays when needed.

“As a team, I would say just execute,” Shafer said. “We have to make contested plays and we have to understand and take it one play at a time. If everyone does their one-eleventh at one time and we will be all right.”

The Bombers fell to 4–2 on the season with a 2–2 conference record.

The South Hill squad will take on Morrisville College at 1 p.m. Oct. 24 in hopes of keeping its third-straight year of making the Division III playoffs hopes alive.