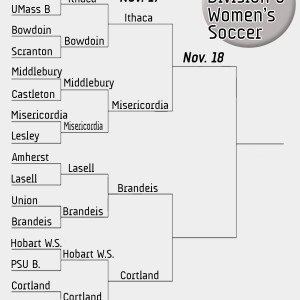 Durst Breneiser/The Ithacan
From left, Bowdoin freshman midfielder Sarah Wallace and Ithaca junior forward Ellyn Grant-Keane get tangled up during the Bombers' 2-1 victory in the second round of the NCAA Division III Championships on Sunday on Carp Wood Field.
By Steve Derderian — Staff Writer
Published: November 14, 2012

The women’s soccer team saw both records and hearts broken on Carp Wood Field last weekend, but in the end, the Bombers are the team advancing in the NCAA tournament.

The most important part of the weekend for the Bombers, however, was that the berth for a spot in the NCAA Division III final four in San Antonio will be decided on Carp Wood Field for the second consecutive year.

After defeating Bowdoin College on Sunday, Head Coach Mindy Quigg said the team faced a strong physical presence against the Polar Bears, and the Bombers will need to improve their approach against aggressive teams in the next rounds.

“I thought [Bowdoin] was a very organized team, very athletic, and they moved to the ball really hard,” Quigg said. “I think we backed off a little bit, and that’s when they were dangerous.”

Among the teams remaining in the Blue and Gold’s half of the tournament bracket are two formidable opponents and a team the Bombers have not seen before. The South Hill squad defeated SUNY-Cortland and Misericordia University, each by a score of 1-0 this fall. Last season, the Bombers defeated Cortland 2-0 to advance to the final four, but the Red Dragons will have to defeat Brandeis College to return to the regional finals.

Cougars Head Coach Mark Stauffer said his team is anxious for a rematch with the Bombers even though his team will be on the road this time around.

“We’re excited to get another crack at them, especially since the stakes are a lot higher now,” Stauffer said. “Our team is feeling very confident after winning at Middlebury on their field, and they aren’t feeling a lot of pressure even though we’re at this point in the season.”

In addition to their record-setting offensive performances in these playoffs, the Bombers also have accomplished some impressive feats on defense. Anchored by senior goalkeeper Becca Salant, the Blue and Gold have surrendered just eight goals the entire season.

The Bombers were trailing in a game for only the fourth time this season Sunday against Bowdoin, but senior defender Anna Gray said the defense has become resilient during the season and has been able to regain their composure even after surrendering a goal or having to come from behind in a game.

“If a goal gets scored on us, it happens, it’s soccer, but we just needed to bring it in collectively to just figure out what we weren’t doing right,” Gray said after Sunday’s victory.

The Bombers also have history and experience on their side as they enter their sweet 16 matchup. The program has made 23 NCAA tournament appearances, tied with William Smith College for the most in Division III history.

The South Hill squad also has good memories of playing regional games on Carp Wood, including victories against Trinity College and Cortland last season. Junior midfielder Amanda Callanan said though Misericordia and potential opponent Cortland are looking for revenge, the Blue and Gold are looking to use home field advantage to the fullest extent.

“We’ve had a lot of great moments here in the last two years, and it’s really special every time we play here, because it’s where we’re most comfortable,” Callanan said. “Every win here gets us closer and closer to San Antonio.”