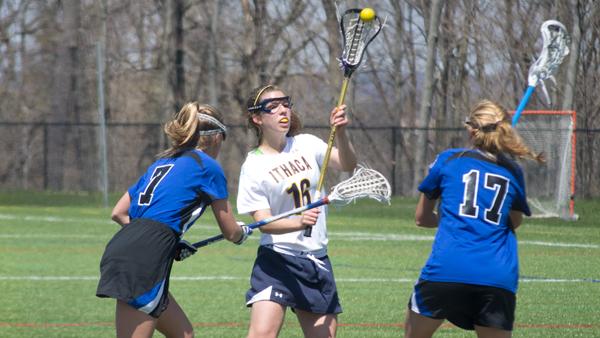 For the past three seasons, the women’s lacrosse team advanced to the Empire 8 Conference Tournament final. For three consecutive years, the Bombers have watched another team accept the championship plaque.

After earning the No. 1 seed for the Empire 8 tournament this season, the Blue and Gold are determined to turn their postseason luck around. Since the first interview conducted this season with a member of the South Hill squad, they have emphasized throughout the 2013 campaign that this will be the year the Blue and Gold win the E8 title, as well as earn the automatic bid into the NCAA tournament. The senior class especially made it clear early on that it did not want to repeat history during its final year.

“We want to go undefeated in Empire 8, we want to win the championship, and we don’t want just an at-large bid to NCAA’s like we did my sophomore year,” senior goalkeeper Jess Worthman said back in March. “We want to earn our spot into that and see where we go from there. We want to go as far as possible, which we have the potential to do this year.”

Glancing back at the program over the last few years, in 2009 — before the Class of 2013 arrived on South Hill — the women’s lacrosse team didn’t qualify for the conference tournament and finished with a 7–9 overall record. In 2010, the Bombers made it to the tournament final before losing 14-10 to the Stevens Institute of Technology.

The next two seasons, the Empire 8 finals would be decided by one goal, with both times going against the Blue and Gold.

“We proved ourselves over the course of last season,” Head Coach Shannon McHale said during a preseason interview. “We had a great year last year, but we just didn’t get it done in the championship for whatever reason. It was unfortunate. It kept us out of the NCAA tournament, but they’re wide-awake this year. They’re ready to go.”

The 2012 campaign included a school-record tying 10-game win streak and going undefeated in regular season conference play. This year, the Bombers, who are currently ranked 13th in the most recent Intercollegiate Women’s Lacrosse Coaches Association poll, are once again perfect in the E8 competition. The Blue and Gold will host the tournament this weekend at Higgins Stadium.

It’s no surprise that the South Hill squad had high hopes at the start of the season, and its confidence has increased for good reason. Ten starters returned to the lineup this year, eight of them being upperclassmen. Their experience has been evident throughout the season with only one of their five losses coming from an unranked team.

In their last five games, the Bombers outscored their opponents 87-29. In the Blue and Gold’s season finale, three seniors scored hat tricks, including senior attacker Tracy Rivas. She broke the career goals record on April 20 against Alfred University, and if the Bombers can make it into the postseason, Rivas could potentially break the points record as well.

The South Hill squad also has a new offensive weapon this year: freshman attacker Allison Runyon. She’s currently 2nd on the team in goals with 29 and has 34 points, the third highest. The rest of her classmates have recently seen more time on the field at the end of the season, giving them valuable college playing experience before heading into postseason.

The Bombers look promising going into the E8 tournament, but that doesn’t mean they can overlook their opponent.

The Blue and Gold will face off against Stevens at noon Saturday. During the regular season, the Bombers traveled to Hoboken, N.J., and won 8-6. The last time the Ducks claimed the conference crown was in 2011, while the South Hill squad hasn’t won since 2008.

Stevens features several scoring threats of their own. Junior attacker Kara Rafferty leads the squad with 59 goals, while senior midfielder Spencer Waybright is their best all-around player with 49 goals, 30 assists and 79 points.

Both the Ducks and the Bombers have a tendency to score more goals in the first half, meaning the key to this matchup will be to get the on the board early and often. Stevens might have scored five more goals overall than Ithaca, but the South Hill squad has scored more in the E8 than the Ducks. Also, Worthman has allowed 120 goals this season compared to senior goalkeeper Meg Collins’ 138.

There’s no doubt that the contest will be intense, and it may even come down to the wire. However, after going 0–3 in the last three tournament finals, the team’s desire to win the E8 title gives it an added edge.

“We have lost in the championship the past three years, and we are so sick of doing that,” senior midfielder Kim Armbruster said recently. “It’s not happening again, and that’s going to be our moment.”