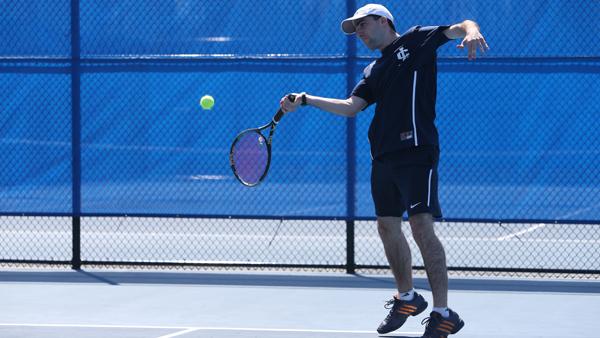 It’s the final week of tennis in the Empire 8, and only four teams remain in the competition. One of them is the Bombers tennis team, who is aiming to win the conference for the first time since 2009.

After winning four straight conference titles, the Bombers have fallen short the past three seasons at the hands of the Stevens Institute of Technology Ducks in the Empire 8. This year seems to show a similar pattern, with both the Ducks and the South Hill squad on top of the conference standings heading into the weekend. The Ducks are playing well, finishing with a perfect record in conference play and losing a total of five games this season. Freshman Chris Hayes said the Bombers have their work cut out for them.

“To beat Stevens, we will have to be at our best and more,” Hayes said. “Our team has the ability to beat them, and with our confidence right now, I believe we can do it.”

In their only meeting of the season, the Ducks beat the Bombers by sweeping the match 9-0. Sophomore Justin Levine said to beat them, they will have to go out and get an early lead.

“If we want to beat Stevens, we are going to have to come out firing in doubles,” he said. “If we can get a lead early, then that will put more pressure on them in singles, and if we keep playing well, I think we could get it done.”

Though Stevens has proved during the regular season that they are the best in the conference, the Bombers will have another task before they could potentially meet in the Empire 8 Championships.

The Bombers will have to beat Nazareth College, and Stevens will have to defeat St. John Fisher for a rematch to be set. Head Coach Bill Austin said defeating the Golden Flyers is their main focus at the moment.

“We play Naz in the first round, so that is the only thing to focus on,” he said.

Nazareth will be the third seed in the tournament. The one time the two teams met this season, the Bombers snuck away with a 6-3 win. In the April 20 contest, the Bombers got off to a 3-0 start in doubles and then they held on in singles.

“We swept doubles against them, and that is a big reason why we came out on top,” Hayes said. “We must bring that intensity out again in this match.”

The Bombers are currently on a four-match winning streak and are playing their best tennis of the year, especially in doubles, having won every doubles match since April 17. Despite this, Austin said he is still trying to instill the importance of the three doubles matches.

“We are not going to back off doubles,” he said. “It has propelled us to a couple of really nice wins, so we are going to keep working on that and make sure we have the right combinations going into the weekend.”

With only one match in the week leading up to the biggest weekend of the season, the Bombers will have a good amount of time to practice. Levine said this time outside of match play will not be taken lightly.

“We need to get out there and play some practice sets and play each other like we are playing another team,” he said.

The Bombers first match will be played at Stevens in Hoboken, N.J., on Saturday against the Nazareth College Golden Flyers. If they win, they will continue play on Sunday.