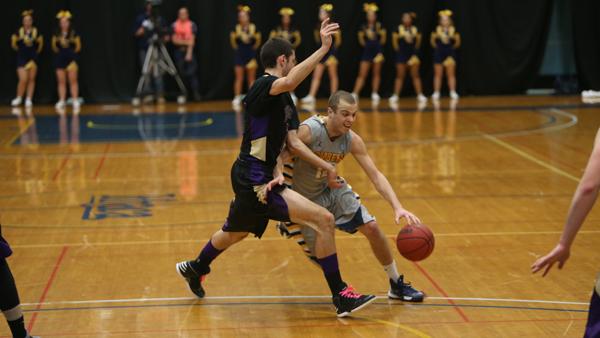 The depleted men’s basketball team was able to clinch a berth in the Empire 8 tournament, but a blowout loss at Stevens Institute of Technology has the squad’s hopes at obtaining the No. 1 seed hanging by a thread.

The Bombers were defeated by the 25th-ranked Stevens last Saturday and are now trailing the Ducks by one game with just two games remaining in the season. The Blue and Gold will have to win their final two games at home and have the Ducks lose their final game at St. John Fisher. Because of tiebreakers, should Stevens lose their penultimate game to Alfred University and defeat the Cardinals, they will still win the regular season championship. Senior guard Eli Maravich said he maintains hope of capturing the regular season title.

The Bombers will host Utica College on Friday night knowing that if the Pioneers lose, they may be eliminated from postseason contention. On Saturday, the South Hill Squad will welcome a Nazareth team that beat the Bombers less than two weeks ago and may also be looking to clinch a playoff spot. The Blue and Gold can clinch the No. 2 seed in the tournament with a win in either game.

Senior guard Jordan Healey said he is not concerned with their potential opponents. Head Coach Jim Mullins said the coaching staff will monitor the out-of-town games as a way to keep tabs on the seeding possibilities but said that the regular season title is almost a foregone conclusion.

The lingering injury problems involving senior forwards Andrei Oztemel and Travis Warech remain Mullins’ chief concerns amid scheduling uncertainty. Both of them are questionable for this weekend’s game, and Mullins said he will not rush them back.

“It would be great if they could get some time and shake off some rust,” Mullins said. “On the other hand, if it comes down to rushing them back and risking injury, that’s foolishness, because we’re already in the playoffs.”

Healey has averaged 28 minutes a game in the five games the pair have missed. Senior center Tom Sweeney started four of five games, and freshman forward Andrew Brandt averaged 14 minutes during the last three games coming off the bench. Healey said he thinks Oztemel and Warech will return for the postseason and allow the Bombers to perform again at a high level.

“We’ll be able to do things we were able to do when we beat Hartwick and Stevens,” Healey said.

While the Bombers’ scoring numbers have dipped with the absence of Oztemel and Warech, Maravich said their absence may make the team even better prepared for the postseason in the long run, and the expanded minutes will give the team a deep rotation for the playoffs.

“We definitely had to make adjustments without them here,” Maravich said. “It’s given us a chance to get more people involved and get everyone on the same page. A lot of our young guys will be game-ready if we need them, so it’s good for them to get some game time, so we’ll be even more deep than we were before.”