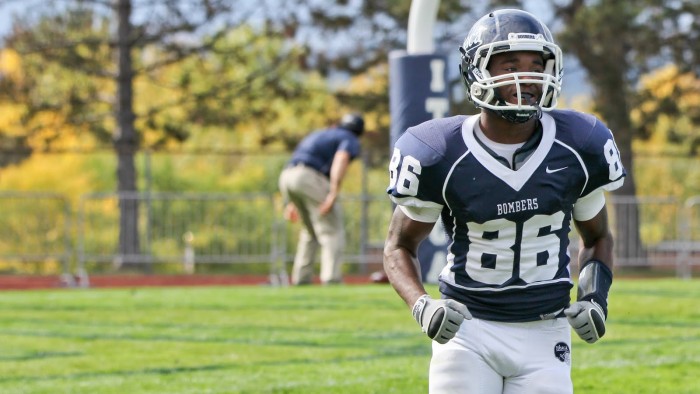 At 5 feet 6 inches, freshman wide receiver Josh Oliver is the smallest player on the football team. However, his role in the Bomber offense is growing.

Oliver received the keys to the Bombers’ “Wildcat” offense, an unorthodox formation that hadn’t been seen before on South Hill. The new formation, which employs a direct snap to a skilled runner and uses pre-snap motions and misdirections to confuse the defensive front, yielded success as Oliver rushed for two touchdowns in the Blue and Gold’s 40-22 win against Utica College on Sept. 29.

“They told me they wanted me more as a receiver or a returner,” Oliver said. “I feel that I’m not really capable of playing quarterback just because of my height alone. As a receiver, when I get out in the open, I’m more versatile.”

Lining up as a quarterback is not the only way Oliver is utilized by the Bomber coaching staff. He has been used as a running back in motion, been targeted as a wide receiver and currently leads the team with 153 kick return yards. Oliver said his lack of size makes him a threat in the open spaces that kick returns create.

While Oliver is already regarded as an athlete and as a returner, he has his sights set on becoming a prominent wide receiver. However, Head Coach Mike Welch said Oliver still needs to fully comprehend the regular offense.

Oliver acknowledges that he still has much to learn as a receiver. However, he is confident in his ability to learn the fundamentals of being a receiver and combining his natural speed and agility. This combination of fundamentals and ability to generate yards resembles Oliver’s predecessor at wide receiver, Dan Ruffrage ’12. Oliver said he met Ruffrage after the Utica game and gave him a confident promise.

“I met Dan Ruffrage for the first time, and after a nice little greeting I told him straight to his face that, ‘In my four years here, I’m going to try to break your record,’” Oliver said. “And he told me word for word, ‘Records are made to be broken.’”

While this may come across to some people as a freshman who’s overly ambitious, senior captain Nate Hemingway said Oliver has the determination and the talent to back up his talk.

Oliver was a prize recruit for Welch and his coaching staff, who had to pry him away from Empire 8 Conference rivals Alfred University and Utica College. Defensive coordinator Mark McDonough, who is responsible for recruiting players in Oliver’s section, had an interest in Oliver since his junior year of high school. McDonough said he met Oliver’s high school coach and was sold right away.

“As soon as I saw the film, I instantaneously wanted to get Josh here,” McDonough said. “He’s a very dynamic football player, and on top of that, coach had nothing but great things to say about Josh as a person.”

McDonough said he was only concerned with bringing Oliver to South Hill, rather than trying to get into a battle with other schools over his signature.

Both McDonough and offensive coordinator Ryan Heasley said they noticed that Oliver has a great deal of moxie. While many freshmen come to Ithaca confident in their abilities, Heasley said, Oliver’s actions speak louder than his words.

“He has something about him,” Heasley said. “He has it. The composure to come into the huddle as a freshman and look the other 10 players in the eyes and be able to call a play. He’s got it, and that’s why he continues to get more reps.”