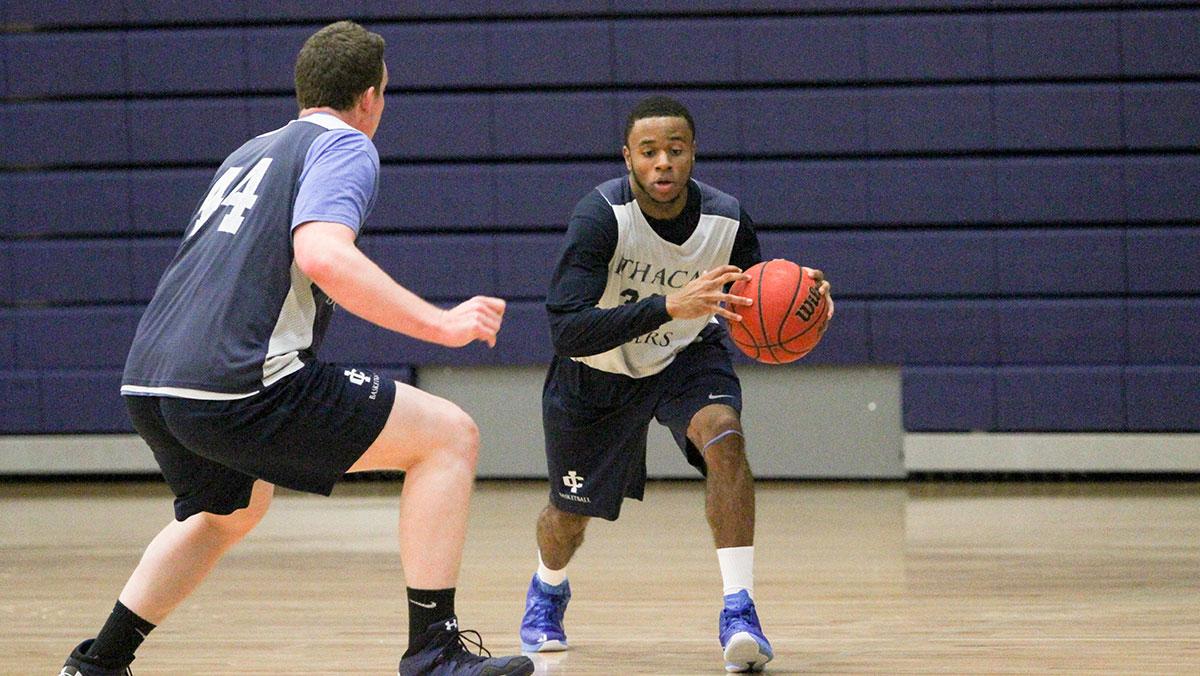 In sports, ambition can lead an athlete to glory, recognition or a championship. Ambition is what led sophomore point guard Ahmad Boyd to the men’s basketball team this season.

Boyd has played basketball since the age of 4, growing up in Irvington, New Jersey. He attended St. Benedict’s Preparatory School in Newark, New Jersey, which is known for its dominant basketball program. Boyd said he always questioned whether he could thrive among such elite players.

“I was a role player amongst players who outshined me,” Boyd said. “I wondered if I should leave and play somewhere else, that way I could get better looks from colleges. But I knew St. Benedict’s was for me and I belonged with those guys.”

Boyd said he always had the intention of playing basketball in college, and when applying to Ithaca College he contacted Bombers basketball head coach Jim Mullins. Over the phone, Mullins told Boyd the team was “guard-heavy” and he would have to stand out to secure a roster spot as a walk-on. Boyd knew he was up against fierce competition but said it did not deter him. However, after trying out, Boyd did not make the cut last year. Boyd said he was shocked, but it wouldn’t stop him.

“It was my first time not making a basketball team in my entire life, and I didn’t know how to take it,” Boyd said. “However, not making the team motivated me even more, and I didn’t take a day off after that.”

Boyd started for the men’s club basketball team throughout the winter and competed in intramural basketball in the spring to remain active. Over the summer, Boyd worked on his jump shot, change of pace and mentality. Mullins said he was taken aback by Boyd’s growth and granted him a roster spot for the 2014 season.

“I am pleasantly surprised with the work he has put in up unto this point,” Mullins said. “He earned his way onto this team and he can be a pleasant surprise to everyone this season.”

Boyd acknowledged that it was an unreal feeling to make the team a year after being cut. But perhaps someone who was more elated to see Boyd make the squad was teammate and close friend sophomore forward Leonard Davis, who said he expected to have Boyd as a teammate.

“I wasn’t shocked to see his name on the roster list,” Davis said. “Once I saw that he made it, it was time to get to work.”

The brotherhood between Boyd and Davis formed at the Fitness Center courts where the two first met freshman year. The two hold each other accountable on the court and in the classroom to excel in whatever they do. Davis makes sure Boyd stays on top of his work in the classes they have together, and Boyd doesn’t let Davis get lackadaisical on the court. Davis said he is most excited about the different style of play the teammates will bring when they’re on the court together.

“When we’re on the court together, it’s a whole new ball game,” Davis said. “With Ahmad and myself, we bring a whole new level of athleticism and energy.”

Boyd quickly went from seeking a spot on the roster to seeking consistent playing time and a part in the rotation. A self-described scrappy role player, he said he is simply looking to contribute to the team’s success.

“I’m not content with just receiving a jersey,” Boyd said. “I want to get on the court. I can be a role player that can help shoulder the offensive load and apply pressure on the defensive end.”

Davis has alternative expectations for his teammate, however. He said Boyd can be the missing link that the program has been searching for after a subpar season last year.

“I think a lot of people will be surprised by me saying this, but I think Ahmad can be a starter for us in this season,” Davis said. “As far as future years, I’d be surprised if Ahmad is not remembered as a great player because of his personality, work ethic and ambition.”