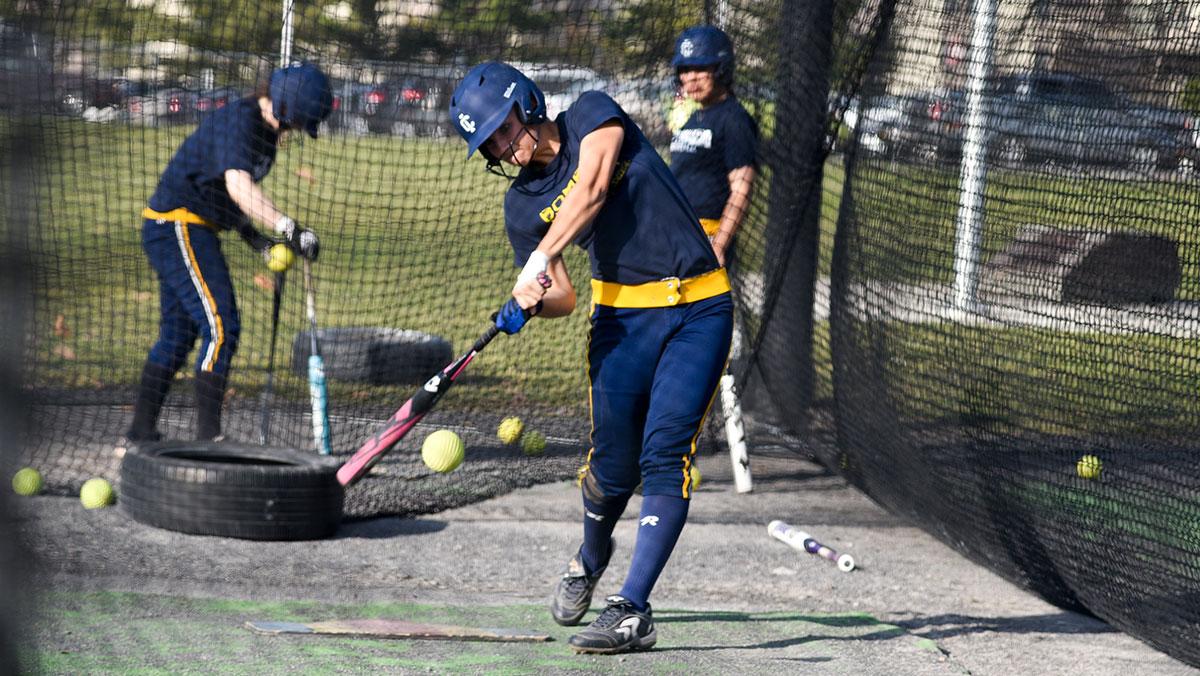 Jennifer Williams/The Ithacan
Freshman outfielder Emily Bloom swings at a pitch during batting practice April 13 at Kostrinsky Field. Bloom has led the Bombers to a 14–11 record this season and has played in 22 games this season in just her first year.
By Matt Rottler — Staff Writer
Published: April 14, 2015

Freshman outfielder Emily Bloom may not be enjoying the hot sun of California anymore, but the cold Ithaca weather hasn’t cooled off her bat as she is leading the softball team in batting average this season.

The Mission Viejo, California, native said she originally began playing softball without even making the decision to play herself.

“My dad just signed me up for softball,” she said. “He didn’t even tell me, he just wanted me to play.”

Her father’s decision paid off, as Bloom attended Capistrano Valley High School and played on the varsity softball team for four years. In her senior season, she was named the team’s MVP. However, she said in high school, hitting was not one of her strengths. She calls hitting a mental game and something she began working on more when she came to Ithaca College. A large part of her sudden improvement at the plate, she said, stems from the talented coaching staff at the college.

“I was never known as a good hitter,” she said. “But when I came here, something clicked and I just started hitting better.”

Bloom, wanting a change of scenery, decided she wanted to come to the East Coast for college. Recruited by head coach Deb Pallozzi and the rest of the team’s coaching staff, Bloom came and said she fell in love with the school.

However, there are several major differences between playing in upstate New York and in Southern California. She said she wanted to come to the East Coast to get away, but the softball atmosphere has proven to be much different than she thought it would be.

“In California we played all year round,” she said.  “We would practice on the field every day and instead, here in the fall, we would do weightlifting.”

Regardless of weather, the outfielder has made an instant impact with her bat this season. Bloom is batting a team-high .442, going 23-for-52 with 11 RBIs in 22 games so far this season. She has started 17 games so far in her first year as a college athlete.

Pallozzi said having youth on the team — which currently has several freshmen, including Bloom, seeing regular time on the field — will be beneficial for the Blue and Gold heading into the next couple of seasons.

“Emily has done well, all the underclassmen have stepped up,” she said. “Having youth gives good depth to the program for future years.”

Bloom said Pallozzi has had a big impact on her game.

“She helped me a lot,” Bloom said. “The way she coaches makes me understand things better and makes me learn more about the game.”

Bloom said she misses playing outdoors every day, like she was used to at home. However, she said the weather in Ithaca has caused her to appreciate more and more the days she gets to play outside.

Since Bloom has gotten to the college, she said the senior captains have had the biggest influence on her as she begins her college career. She said they showed her how to adjust to college life on and off the field.

“They have been helping,” she said. “As a freshman you know how to play softball, but it’s different the way people do things, showed me how to adapt.”

In addition to adjusting to campus life, Bloom is focused on the team’s goals. She said the team is in a good position right now to make a postseason run. Keeping the momentum high, she said, has been key in the 8–8 Bombers’ victories this season.

“After the loss to [SUNY] Cortland, we have stepped it up,” she said. “We just need to finish games more.”

Bloom’s high school coach, Marc Kendrick, said he is not surprised that Bloom is doing well in college softball. He said injuries hurt her in high school, but she was always someone who battled through the pain. He also said from what he saw from her in high school, she has the potential to become a leader, even as a freshman.

“She’s great. You ask her to do something and she does it,” he said. “She leads by example.”

Down the road, Bloom said she wants to look back and feel that she not only improved her own skills but also helped her teammates on the field.

“Coach tells a lot of stories about past players, not necessarily people who played a lot but influenced others,” she said. “I want to be one of those people who influences other people to win games and help the team.”