Cardinals soar past Bombers with first shutout since 2002 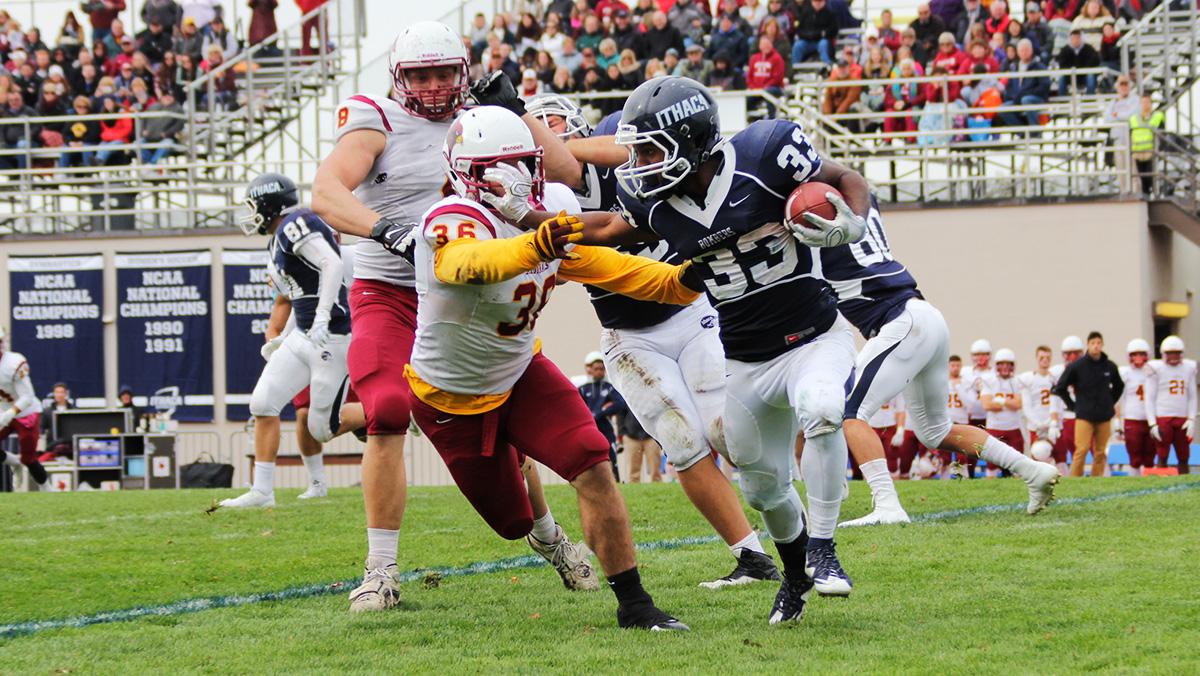 The Ithaca College football team was shut out by St. John Fisher College in a 34–0 defeat at Butterfield Stadium. The Bombers were shut out for the first time since Oct. 19, 2002, and fall to 4–4 on the season.

Leading up to the Oct. 31 contest, the Bombers had a 6–3 all-time record, outscoring their opponents 236–167. However, the Bombers did not have history on their side this time around.

Senior quarterback Wolfgang Shafer’s shaky stretch continued as his first pass of the game was intercepted by Fisher cornerback Brandon Fuentes and returned 44 yards all the way to the house to give the Cardinals an early 7–0 lead in the first quarter.

After both squads traded punts, Shafer lofted a pass down field, whereupon the pass attempt was intercepted by junior cornerback Alec Mortillaro.

Fisher kicker Taylor Byrne converted a 32-yard field goal attempt as the clock expired in the first quarter to extend the Cardinals’ lead to 10–0.

The two interceptions were Shafer’s third and fourth in the first quarter, and senior wide receiver Josh Oliver left with an undisclosed injury after a career game against Morrisville State University on Oct. 24.

The offensive struggles persisted as senior center Gideon Inkeles first down snap sailed over Shafer’s head. Sophomore running back Tristan Brown recovered the ball in the endzone for a safety, giving the Cardinals a 19–0.

The Cardinals continued to soar against the Bombers’ banged-up secondary when Naton slinged a 37-yard touchdown pass to wide receiver Bobby Campese for a commanding 25–0 lead after St. John Fisher missed the extra point.

The Bombers were without their starting safeties Jordan Schemm and Anthony Skretny IV, due to injuries.

The Cardinals would close the first half with a 12-play, 64-yard drive, which was capped off by a 22-yard field goal attempt off the boot of Byrne for a 28–0 advantage over the Blue and Gold.

The Cardinals dominated time of possession as they held the rock for 20:27 compared to the Bombers’ 9:33.

Naton completed 14 of 22 passes for 203 yards and two touchdowns. Shafer, along with his two interceptions, threw just eight pass attempts and completed just three of them for 31 yards. Junior wide receiver Andrew Tabbert caught all three passes from Shafer.

“We are just not very good production,” Welch said. “We got to keep working at it and try to come up with some solutions, but we’ll get back at it on Monday.”

The Bombers received the second-half kickoff at their 40-yard line, but were unable to take advantage of the field position as Shafer threw his third interception of the game.

The Cardinals immediately took advantage of Shafer’s 12th interception on the season, when running back James Chambers took the handoff 6 yards up the gut for the score and a 34–0 lead. The Bombers would block the extra point.

Senior quarterback John D’Onofrio substituted in for an injured Shafer, and was able to orchestrate a drive into the the Cardinal’s red zone. Shafer would not return in the game.

However, on a fourth down attempt, D’Onofrio’s pass was intercepted by Fuentes at the 15-yard line for Fuentes’ second interception on the afternoon.

Fuentes, who now leads the Empire 8 in interceptions with seven, said the Cardinals are just taking the rest of the season game-by-game.

“It was just coming out playing the best game in the world,” he said. “We have our destiny in our own hands, we just got to keep winning and everything will hopefully fall into place.”

D’Onofrio’s interception was the fifth total interception among Bomber quarterbacks against the Cardinals’ defense on the day.

Both Shafer and D’Onofrio combined for 14 completions for 138 passing yards.

The running game was stale for the second week in a row, rushing for only 2 yards for the entire game.

Naton said the win was a huge momentum churner after Morrisville defeated SUNY Cortland 42–28 and Alfred University beat SUNY Brockport in the scores around the Empire 8.

“We heard a couple other teams lost today,” Naton said. “It’s a big win coming on a four-game winning streak. We got to keep it rolling.”

The Bombers will hit the road for their final away game of the season at noon Nov. 7 against SUNY Buffalo State at Coyer Field before they head back home for the 57th installment of the Cortaca Jug.