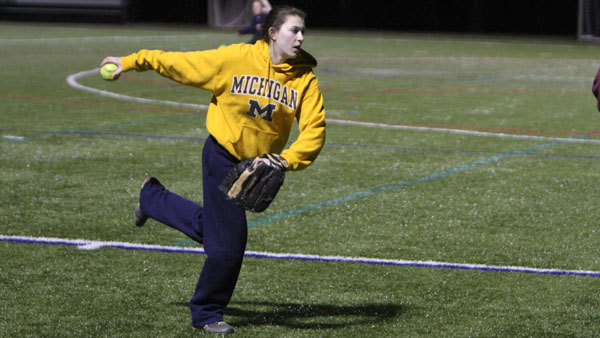 One more win was all the Ithaca College club softball team needed to clinch the North Atlantic Regional Conference North Division title against Syracuse University on April 12. In the top of the seventh inning, the game was tied at 3–3. With the Bombers last chance to score, cheers emerged from the dugout in hopes that the team would soon see another player cross home plate.

With two outs and no one on base, sophomore third baseman Ava Gerardo hit a double to left-center. When junior first baseman Kathryn Kaknis got up to the plate, she knew what she had to do. As the whole team surged to the fence, confident that Kaknis could bring Gerardo home, Kaknis hit a single to score Gerardo and the team took a 4–3 lead. For the first time in club history, the Blue and Gold would make a National Club Softball Association postseason appearance after finishing with a 14–1 regular season record.

Senior Marissa Furforo, president of the club and the team’s second baseman, said it is a great feeling to have accomplished the team’s season-long goal of going to Regionals.

“Why not Ithaca College club softball?” she said. “All year we have been saying, ‘Regionals, Regionals, Regionals.’ It has been something we’ve been aiming for, so I think it shows we came together as a team, won a bunch of games, and are achieving our goals.”

The Bombers began Regionals against Division I opponent Sacred Heart University. Sophomore shortstop Megan Hotchkiss said the team went into the game nervous, but confident it could come out with a win.

Initially, the game was tightly contested, but the Blue and Gold began making multiple fielding errors and ended up losing the game 8–5. Sophomore catcher Jennifer Bruer-VanDeWeert, fundraising coordinator of the club, said the Bombers may have become too comfortable as the game progressed and did not play to the best of their ability.

“I think a lot of the time when we play a team that is lesser than us, sometimes we sink to their level, and I think that’s exactly what we did with Sacred Heart,” she said.

The Bombers went on to play the University of Connecticut, which had lost to Penn State University in its first game 9–1. The Blue and Gold, already frustrated they had lost their first game, took another loss, 3–0.

Because Regionals was a double elimination–style tournament, the Bombers were eliminated from competition on the first day. However, the rest of the competition took an unexpected turn when UConn was disqualified because it had failed to submit its official roster to the NCSA.

Had this happened earlier, the Blue and Gold would have played Sacred Heart again to find out who would be playing Penn State. The Bombers still qualified for an at-large bid, similar to a wildcard. Because of the UConn situation, Bruer-VanDeWeert said the team’s at-large bid would be considered more heavily. If the team decides to submit for the bid, and receives it, the Bombers could still go to the NCSA World Series in Columbus, Ga.

“Funding-wise, it doesn’t really make sense,” Bruer-VanDeWeert said. “There’s no way we can raise that much money in two weeks. The school will pay it, but it will probably take us three years to get out of debt.”

Additionally, the team is not sure if it would have enough players to compete because the NCSA World Series is set to take place May 16–18. Bruer-VanDeWeert said if the team decides to go, the seniors would probably have to fly back on May 17 in order be back for graduation the following day. Whether or not the team decides to submit for a bid, Furforo said the Bombers have had their best season yet, and making it this far is a big accomplishment for the program.

Bruer-VanDeWeert said she attributes the success of the club to the women playing as a cohesive team.

“We are all just really good, whereas other teams, they’ll have that one girl who is an amazing hitter, and every time you know she gets up, she is going to hit the ball,” she said. “With us, we are all at the same level, and there is no one single person who is pulling our team.”

Normally the club will play three games in a day during the regular season, which can get very tiring, so having players who can go in for the starters is crucial. Because all of the players are equally talented, Furforo said the bench players have been a very reliable resource to the team. The bench also changes regularly so everyone has equal playing time.

Overall, Furforo said team camaraderie has really brought the Bombers to a higher competitive level. In practice, when Gerardo goes to make a successful diving catch at third base, voices are heard from all over the field to make sure Gerardo’s exceptional catch is commended. Furforo said it is this kind of team spirit that best represents the Blue and Gold’s style of play.

“On and off the field, we really get along very well,” Furforo said. “We work hard, but we also make sure there’s time to grow individual relationships with each other. Stick nine people out there who have never talked before and you may do fine, but you won’t succeed like we do.”

Senior outfielder Karli Spencer, vice president of the club, said it’s nice to see how much progress the team has made over the years because it shows how serious and competitive the team has gotten in so little time.

“We didn’t win any games freshman year, which shows how pulling everyone together as a team and working together can really get us far,” Spencer said. “It is a great acknowledgement for the club team especially, showing we are not just fooling around and that we actually are very competitive here.”