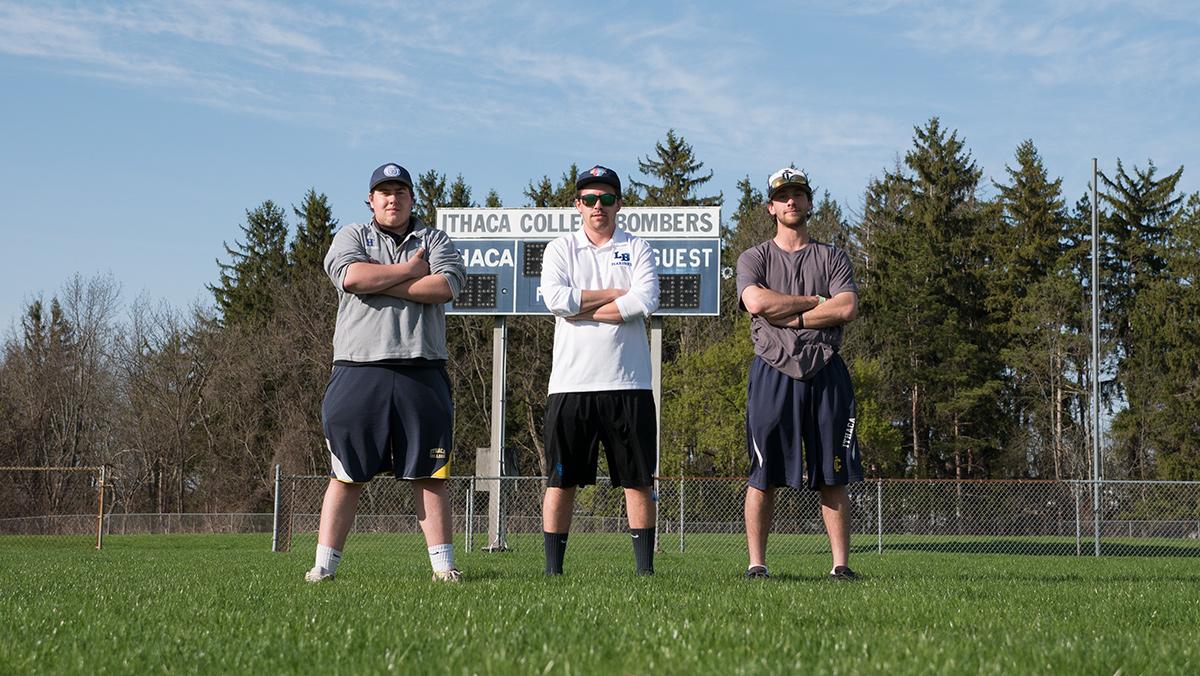 MANYA MARGOT/THE ITHACAN
Junior Aaron Jay, senior Jack Fagan and sophomore Mike Moritz are members of the club baseball team and struggle to find practice times for the team. Moritz, along with sophomore Kirby Wilhelm, proposed a bill to the Student Governance Council on April 24 to turf Yavits Field by N-Lot.
By Casey Koenig — Staff Writer
Published: May 3, 2017

The Ithaca College men’s club lacrosse team was in the middle of an intense game late one March evening last year against Cornell University. They were in double overtime, and it was encroaching on 10:30 p.m. Suddenly, the lights shut off, and the game abruptly ended.

This can happen when games are postponed. Senior Connor Kreston, president of men’s club lacrosse, said that this year, the team had to wait one hour for varsity soccer to finish practice March 26 before it could use the field. The varsity soccer team was assigned part of the same time slot that the club lacrosse team had, except club lacrosse never received the updated schedule.

“We had referees,” Kreston said. “We had photographers. We had parents. We probably had 70–80 people waiting for varsity soccer [to finish]. We had to pay the referees to sit there, and it is a couple hundred dollars an hour. It is just unprofessional.”

Out of the college’s 6,221 undergraduate students, 15 to 20 percent of the population are involved in club or intramural sports. Since they do not compete at the NCAA level, their practice schedule is not as structured as a varsity team’s schedule. Students agree that this is understandable, but it leads to difficulties scheduling games and practices.

Will Rothermel, associate athletic director of the Office of Intercollegiate Athletics, said scheduling team practices is done by faculty, and that staff from the athletics office and club sports office work together on it.

“In-season varsity teams are prioritized based on their competition and practice schedule, but after that, we schedule equitably between varsity and club sports,” he said.

Senior Laura Ward, former president of the women’s club soccer team in Fall 2016, said that she had a hard time when it came to scheduling practices for her team.

As a rule implemented by the Town of Ithaca Board, the lights on the turf field must turn off at 10:30 p.m. This has cut practices short due to the lights turning off in the middle of a late-night practice. When there is already limited time, it is essential that given practice time is utilized as well as it can be.

Senior Jack Fagan, president of the club baseball team, said the team was allowed to use the track in the Athletics and Events Center to practice but that one day, there were several teams on the track at the same time that it was usually designated for club baseball. The team was pushed into a back corner and threw balls back and forth. They weren’t allowed to throw anywhere except in the middle of the track, but they needed the practice. A ball hit a window, breaking it, and the team was banned from using the track.

“We were just trying to work with what we had, and one bad throw, and it was shattered,” Fagan said. “And now, we’re kicked out of the A&E.”

Sophomore Mike Moritz, a member of the club baseball team, and sophomore Kirby Wilhelm, a member of the club rugby team, have created a bill to turf Yavits Field, the field located by N-Lot, which they proposed to the Student Governance Council on April 24. The field would not only be turfed but would also have lights and would allow for club and intramural sports to have their own adequate space for games and practices.

A mandatory meeting for all club sport executive board members was held April 20 to discuss the bill and pass it around for signatures.

Moritz described the bill during the meeting and answered questions other club sports members had. He and Wilhelm have been working on the bill petition with Brad Buchanan, associate director of recreational sports, for about a month and a half.

The new field would benefit a large part of the college’s population since so many students participate in club sports, Moritz said.

“This would be great for the recruitment and retention of students,” Buchanan said. “This is an investment in our students.”

“If we installed a synthetic turf at Yavits Field, I think that would absolutely attract prospective students in general because of how we could utilize it year-round,” Rothermel said. “I’m not sure we have more field space to utilize, but a synthetic surface could potentially ease scheduling of games and practices by being able to use it in the winter months.”

On April 24, the SGC voted to pass the bill, with 15 votes in favor and zero votes not in favor. One vote was withheld.

Moritz said club sports athletes do not feel any animosity toward varsity sports, but he, Wilhelm and others are looking to make participating on a club team a more positive experience. He said there has been a lot of support.

“There were 30 club sport representatives at the meeting in support of the passing of the bill,” Moritz said. “They were from many different club sports, outdoor and indoor, and swimming, too.”

Wilhelm said most club sport athletes who play outside, in particular, are behind the bill.

“We share the field and understand how limiting it is in its current state,” Wilhelm said. “There were some questions about how we can pay for this, which is something that can be discussed.”

Outdoor club sports teams often have to share the same field or even go off campus to find field space. This limits the amount of time that each team can be on a field.

Kreston said times that are meant to be designated for men’s club lacrosse practice at Higgins Stadium, were used for their games instead and they were hardly able to fit any practices in this semester. During Fall 2016 the team was able to practice once a week on Monday nights from 9 to10:30 p.m. He said his team, along with the other club and intramural teams, should have more established times for practices, even if it is only for an hour a week at the same time.

“Everybody has different schedules: We have people working; We have guys who are in the military,” Kreston said. “We’re really trying to make this work, but when you have practices that are 11 [p.m.] to 12:30 [a.m.], and the next day it’s 7–8 [p.m.]— when it changes every day, it’s kind of hard to have a set schedule and get everybody to be there, so we can’t even have practice if we wanted to.”

Moritz said they went in with a mission and are coming out successful.

“The passion showed through, and it passed with ease,” Moritz said. “There’s been over 800 signatures, and it’s still growing.”

The Office of Recreational Sports recently delegated a new budgeting system for the 2015-16 academic year.