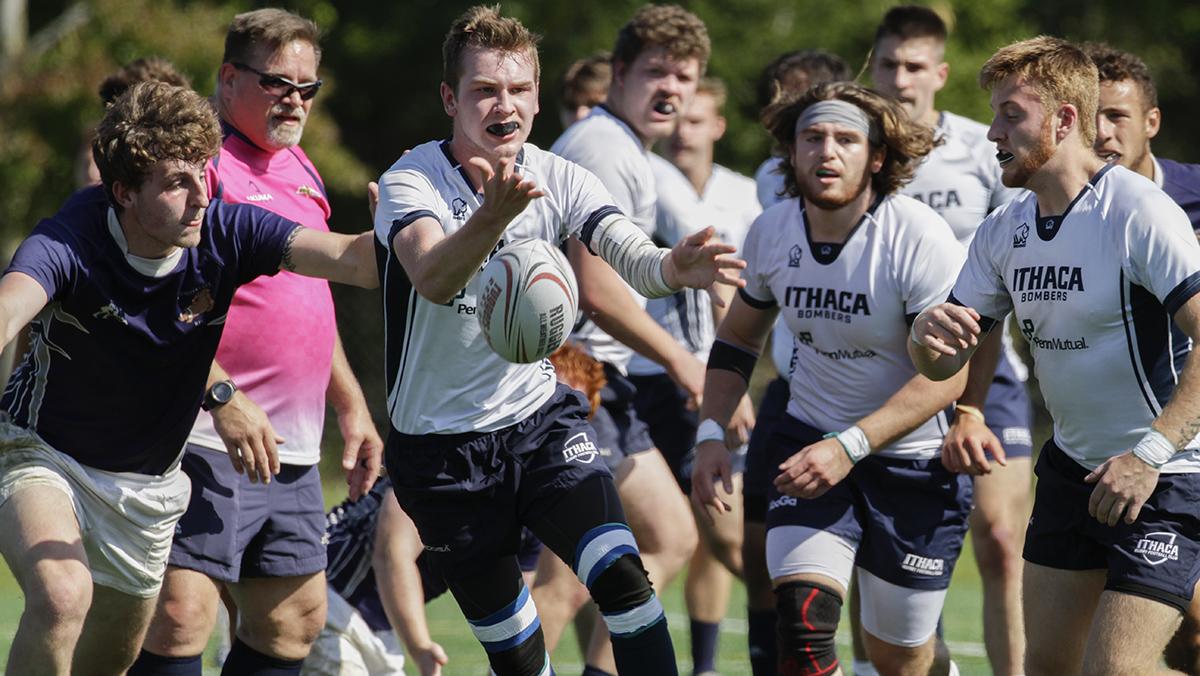 Following a semester marred by COVID-19 protocols, restricting practices and prohibiting outside competition, club sports have resumed their usual schedules at Ithaca College.

Although varsity sports returned to competition last spring, club sports moved through phases that limited what teams were allowed to do during practices. This included breaking teams up into pods, restricting contact in drills and not competing in games with clubs from other institutions.

Lauren Hoffman, program coordinator for Recreational Sports, said the college was able to decide in August that it would permit club sports to fully operate this semester.

“It was kind of a last-minute decision. We had to see how it was going to work, and we had to have communication with other schools,” Hoffman said. “That’s kind of what makes it work, is the fact that we have communication. We know that everyone’s on the same page when it comes to vaccinations, testing and things like that.”

For the most part, the college’s club teams have traveled within New York state and have not had to stay overnight. Club teams can also schedule their own games — they just have to coordinate with Hoffman and the Office of Campus Recreation first to check for the availability of playing fields. Hoffman said the Office of Campus Recreation helps teams with road trips by providing them with gas cards and organizing hotel reservations when necessary, but the whole process has fewer protocols to follow compared with last year.

“Last spring, myself or Sean [Reilley] had to be at every practice, making sure people were wearing their masks and checking badges,” Hoffman said. “This year, it’s more on the students to check badges. … It doesn’t have to be as strict this year, but then again, clubs could be playing other schools that [have more restrictions]. That’s why we communicate with our counterparts at those schools that they’re playing against.”

With club sports back to having a regular fall season, participation has also increased for most sports. Senior Peter Schuchman, president of the Ithaca College men’s club rugby team, said the team has had a smaller roster than anticipated. However, because the club plays in both the fall and spring, he anticipates that once other students see the team play games, it will help recruit newcomers.

“People were skeptical that we’re going to have a season, and I think now that we have games under our belt, we’re actually able to be active and get more guys as the season goes on,” Schuchman said.

The club played its first game Sept. 18 against the Niagara University club rugby team in Niagara, New York, and the schedule runs through the end of November.

Schuchman said the team members have been holding themselves accountable, from COVID-19 concerns to concussions, the club has made sure not to take any unnecessary chances in order to ensure it plays a full season this fall. The club rugby team’s season is split into the fall and spring semesters, similar to the club tennis team’s schedule.

Junior Evan Glotzer, who has been a member of the club tennis team since his freshman year, said he would only see about 12 people at practices last year. This year, however, has been a different story for participation within the club.

“Our first practice, we actually had about 50 people, which is insane,” Glotzer said. “What we’ve had to do is split it down the middle between competitive and non-competitive. So about 25 to 30 people probably show up consistently day-in and day-out, week-in and week-out.”

Glotzer added that he has seen new faces at every practice this year, and he believes that the club competing against outside teams has helped draw in newcomers. Glotzer said it was good for the returning members to compete as well to help retain them.

“That’s the thing I think most people have been missing,” Glotzer said. “Up until last weekend, it was 18 months since we last played a tournament. It’s just great to get out against different people. As great as it is to hit with everyone, after a while it kind of gets stale and a little boring and you want to hit with other people and for bigger stakes.”

Although club sports coming back has led to increased participation and interest for some clubs, teams like women’s club soccer have set roster sizes to account for their competitiveness. The team is a member of the National Intramural-Recreational Sports Association (NIRSA) and has regularly been ranked within the top10 of NIRSA’s Region 1 Women’s Club Soccer Ranking. In the past, the club has gone up against club teams from schools like Cornell University, Penn State University and the University of Delaware.

First-year graduate student Allyson Galaraga, president of the Ithaca College women’s club soccer team, said her main concern coming into the season would be getting enough people to field a competitive team. But once she saw the players who showed up to tryouts –– including four former varsity women’s soccer players –– her mind was put at ease.

“It’s been awesome to see the girls playing soccer again,” Galaraga said. “That was one thing that me and the previous executive board were so worried about, seeing girls really interested [in the club]. To see club soccer come together after such a crazy year [with the COVID-19 pandemic] is something I’m so grateful for.”

Galaraga said the team’s goal is to make it to regionals, which run through the end of October and are held in Westerfield, New Jersey. To travel for away games, the club designates members of the team to drive other players, and drivers are given gas cards to cover the expenses. The club’s competitive schedule will wrap up this semester, but the team will still practice indoors following the conclusion of its fall season. Inversely, club baseball’s main season will start in the spring, but the team has been able to get some games under its belt this fall.

For Johnson and the rest of the club baseball team, it has been a long 21 months since they had a regular season. In his final year at the college, Johnson said he is not taking this season for granted.

“It’s been awesome to have practices and a regular season [this fall],” Johnson said. “We haven’t had a regular season since the Fall of 2019, so it’s great to be back. We’re all super excited especially since it’s the last year for many of us.”

With a year full of club sports competitions planned for the college, Hoffman said everyone involved is thrilled to be back to normal.