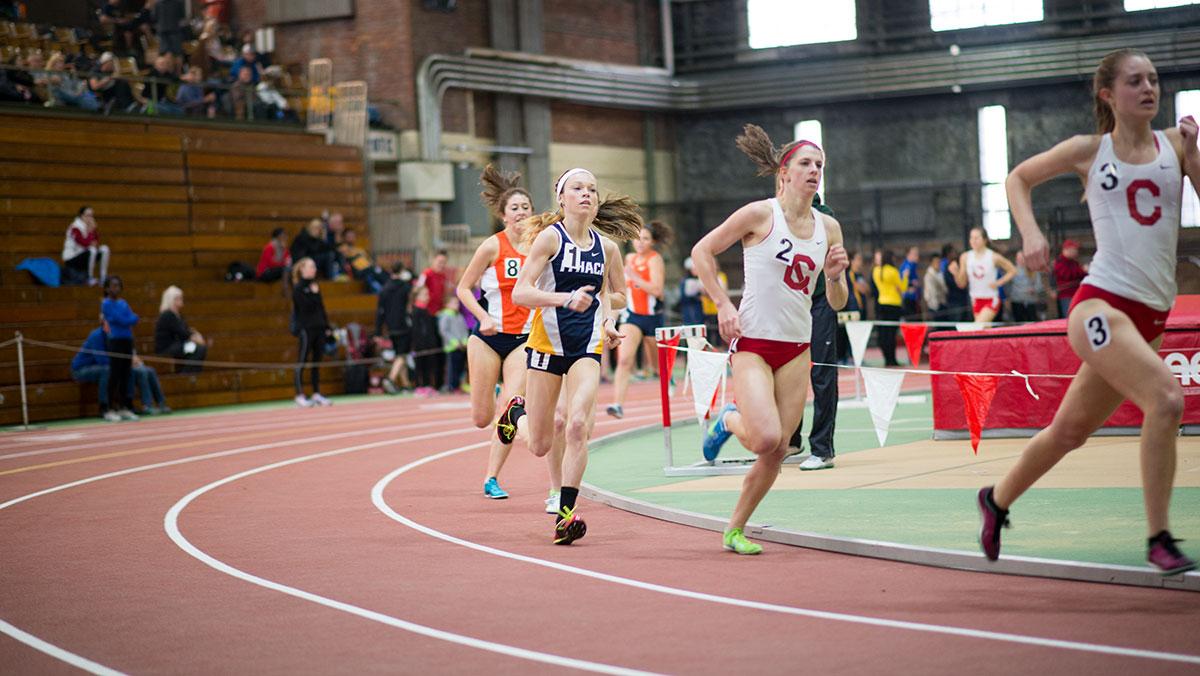 In high school, now-freshman middle distance track runner Taryn Cordani structured her own workouts and ran however many miles she felt she needed each day in order to succeed. Now, however, with the help of the college’s track and field coaching staff, Cordani has been able to shave almost 20 seconds off of her mile time and has come close to reaching the qualifying time for nationals in just her first season on the team.

A typical practice for Cordani at Douglas High School in Douglas, Massachusetts, consisted of her coach asking her what she was planning on running that day instead of instructing her, Cordani said.

“I just kind of tried to come up with sprinting and speed workouts, but I didn’t know what I was doing at all,” Cordani said.

However, her natural skill and impromptu training proved to be very beneficial, as she was named a four-time league all-star in track and field in high school.

Head coach Jennifer Potter said Cordani’s performance during her senior year of high school played a big role in her recruitment to the college. Now, just one year later, Cordani is already a big contributor to the program, finishing fifth in the Eastern Collegiate Athletic Conference meet in the mile run.

The training provided by Potter and her staff has already had an impact on Cordani, who said the biggest difference between her high school program and the track and field program at the college is the amount of training and the increased structure.

“We just have so much more training and so much more is expected of you,” Cordani said. “It’s good to have that inner drive, but when you’re training next to someone who’s working equally as hard, you want to match them.”

Potter said she has also realized Cordani’s beneficial response to the training, but thinks much of her success has to do with her mentality, level-headedness and coachability.

“She has a great competitive nature and enjoys competition,” Potter said. “Every great athlete needs to have that thought process.”

Not only did Cordani coach herself throughout her high school years, she also competed in events across the board. She participated in the long jump, discus, 800-meter, mile, two-mile and various relays. Cordani said this versatility has allowed her to mesh well with her new teammates, even though she only runs middle distance at the college.

“It’s funny because I like it that I’ve done other events because I can relate to my teammates that do other events,” Cordani said. “Like the throwers, when they find out that I did discus it’s like you can respect them and you realize how hard it is.”

“She always makes sure she goes to cheer on different event groups which is sometimes hard to do in track,” Sartori said. “It’s difficult to socialize with everybody when you have such a big team but she has a really wide array of friends, and I think she knows a lot of different people. It’s great to train with her.”

Being a part of the family-like track and field team has made Cordani more excited for meets and practices, she said.

“I think the team atmosphere is great,” Cordani said. “It is very family-oriented and we all need to do well to be successful.”

Although the outdoor track season has just begun, Cordani left an impression on her teammates and coaches during the indoor season that Sartori said will carry to the outdoor season.

“I think Taryn is not afraid to take charge of a race, which is cool,” Sartori said. “She’s very aggressive in races and she gets out really hard, gets into a good position and she’s not afraid to make moves.”

The Bombers have not yet had an outdoor track meet or practice due to the weather conditions, but Cordani is looking forward to running outside because that is what she did in high school. Her goal is to make nationals and continue improving, which Potter said are both attainable goals.

“She’s progressed just like we had hoped she would,” Potter said. “But I still think she’s got more in her, and she knows it too.”