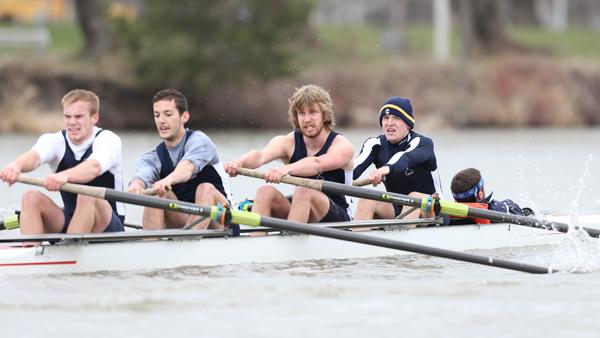 As the Bombers took the water on Lake Onota last weekend to race Williams College and Coast Guard Academy, one thing was on their mind: revenge.

For the past two weekends, the men’s and women’s crew teams have raced teams they will face in the coming weeks of post-season competition. Both teams managed to win their races against Coast Guard.

The women said their victory against Coast Guard was important for them, because the Bears snuck out a bid into the National Championships instead of the Blue and Gold.

“One of the best points of the race was when we took our move against Coast Guard in the third 500,” senior Rebecca Lee said. “That surge of energy and speed is one of the best feelings.”

The women finished behind Holy Cross and William Smith last weekend in Worcester, Mass., with a time of 7:00.4. Lee said her team plans to use their races from the past two weekends as motivation during practice.

“In practice, we really need to push in every piece,” Lee said, “We need to think about the [other teams] and what they’re doing and kind of motivate ourselves pretending they’re there next to us and mentally just use these races as motivation every time.”

While Lee refers to the team’s psychological state throughout the next week, women’s Head Coach Becky Robinson said she would also like to see her rowers improve on a more technique-based level leading up to state and regional competition as well.

The men have also set their sights on improvement and revenge against certain teams.

On April 20, the men’s first boat took second place after getting edged out by Trinity College by seven-tenths of a second. With a time of 5:58.73, it was one of their best this season. Last weekend, the men finished second behind Williams with a time of 6:10.9.

Men’s senior captain Mike Lamb said the whole team could use the experience they had with Trinity and Williams the past two weekends to constructively improve upon their mentality going into upcoming races.

“We went into the race this week with high expectations, especially after how well we raced against Trinity,” Lamb said. “We fell short of our goal, which is pretty frustrating at this point in the season. The positive that we took away from this weekend was how we reacted.  As soon as we were off the water, we were looking to next week and what we need to do to get better.”

Men’s Head Coach Dan Robinson said starts are the the most important improvement that his rowers can make leading up to State and ECAC championships.

“In the two races we’ve lost, we were clearly inferior at the start,” Dan said, “If we want to beat them, we have to stick with them on the start. In the middle of the race, I think we’re as physical and strong as anybody out there.”

With the postseason around the corner, both teams say there are improvements to be made, but they are not major issues that will prevent them from being successful.

“Looking ahead at this point in the season, we just want to make every stroke count and capitalize on the training we have put in all year,” Lamb said. “Our goal has been to win these next two weekends. Our mentality is simple, pull hard and don’t stop.”