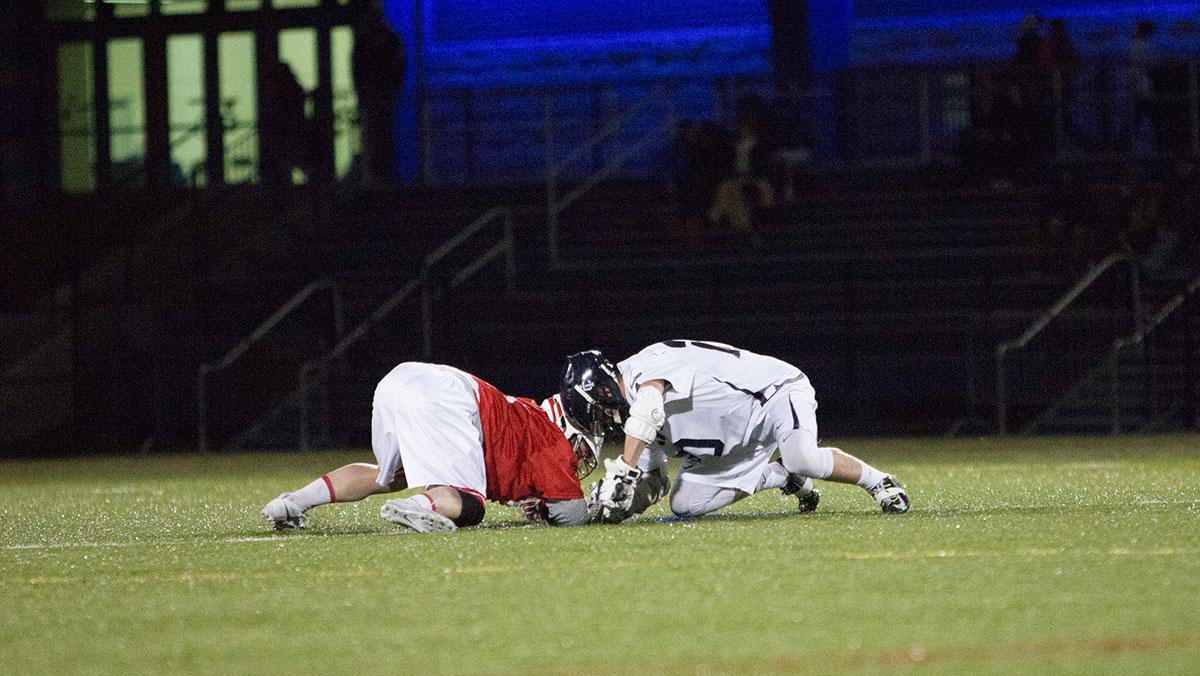 CAITIE IHRIG/THE ITHACAN
Sophomore Steven Landspurg is in position for a faceoff against rival SUNY Cortland on March 30 under the lights at Higgins Stadium.
By Matt Hornick — Staff Writer
Published: April 6, 2016

The ball is set in the middle of the field. Ithaca College men’s lacrosse team junior midfielder Grant Osadchey approaches the ball and positions himself to battle Stevens Institute of Technology sophomore midfielder Scott Wedgeworth. They wait for the whistle, knowing that at this moment, all that exists is each other and the ball.

The whistle blows, and both men pounce for the ball, trying to take control so his team can have the first opportunity to score. Osadchey comes up with the ball, and the Bombers’ possession begins, thus ending the first of many faceoffs that occur during this game.

Osadchey said that outside of securing possession, faceoffs are important because they allow the winning team of each faceoff to establish the tempo of the game.

“The team that wins the faceoff is able to control the speed of the game because they are the ones with the ball, so the defense has to adapt to the speed the offense is playing at,” Osadchey said.

FoGos — or “faceoff, get off” players — are faceoff specialists who perform a faceoff and then get off the field as soon as possible. They will play defense if needed until they have a chance to get off the field.

Head coach Jeff Long said some of the keys to being good at faceoffs include agility and timing. The importance of keeping the ball out of opponents’ sticks and controlling the pace of the game is why every lacrosse team has specialized FoGo players.

“There are different types of faceoff guys. Some are quick, some are strong, but ideally, we look for guys with similar build to wrestlers who have a low center of gravity and quick wrists,” Long said. “You have to have a good twitch mode in your body so as soon as you hear the whistle, you’re up and fighting for the ball, and you have to be strong, and you have to be tough to grind it out.”

Faceoffs occur at the beginning of each half and after every goal, meaning a team can have possession immediately after it scores. Long said winning faceoffs can swing the game in one team’s direction.

“Faceoffs are key to going on runs,” Long said. “In basketball, after you score, the other team gets the ball. In lacrosse, there’s a 50 percent chance you get the ball back after you score.”

Through 10 games in the 2015–16 season, the Bombers have won 62.5 percent of their faceoffs, the highest percentage in the Empire 8 Conference. Individually, Osadchey has won 62.2 percent, and sophomore Steven Landspurg has won 63.4 percent. They are the top two players in the Empire 8 who have taken at least 100 faceoffs this season.

While Landspurg is winning more often than he is losing, he described faceoffs as a part of lacrosse where no one is perfect.

“Faceoffs are kind of like a game of rock, paper, scissors, in that no matter what move you use, there’s always another move that can beat what you’re doing, so you just have to get as good as you can at the moves you have,” Landspurg said.

Assistant coach Mike Silipo ’11 works with players on faceoffs during practice. He said most of the drilling they do in practice is about creating muscle-memory through repetition. They start with chopping their sticks over the ball and then clamping their sticks onto the ball to enhance their hand speed and clamping accuracy. They finish with taking actual faceoffs against each other, and they will sometimes insert random members of the team so that no one gets too comfortable going against one person.

Silipo said FoGos tend to have a limited repertoire of moves they use and having two players that can split the majority of the faceoffs works to their advantage.

“Grant and Landspurg are a good complement to each other because Grant has one specific move that he does regularly, and Landspurg has a completely different move regularly,” Silipo said. “When we’re playing a team that has only one guy taking faceoffs, he’ll be seeing two fresh bodies with different types of moves, which keeps the other team on their toes.”

Long said he will also put senior defenseman Eli Gobrecht at faceoffs as a change of pace when neither Osadchey or Landspurg are able to win consistently. Gobrecht has only taken six faceoffs this year because both Osadchey and Landspurg are having successful seasons.

“If we’re losing a large percentage of faceoffs, we’ll put Eli there almost to let the other guy get a clamp on the ball and then just put him under intense pressure with the hope that he’ll poke the ball loose,” Long said.

Most colleges will recruit strictly FoGo players, and Silipo said he and the coaching staff focus on more well-rounded players.

“We get a lot of crap from other coaches across the country for not recruiting pure FoGos,” Silipo said. “Our faceoff guys need to be able to play defense as well because we lose almost 40 percent of our faceoffs, so those guys need to at least support us defensively.”