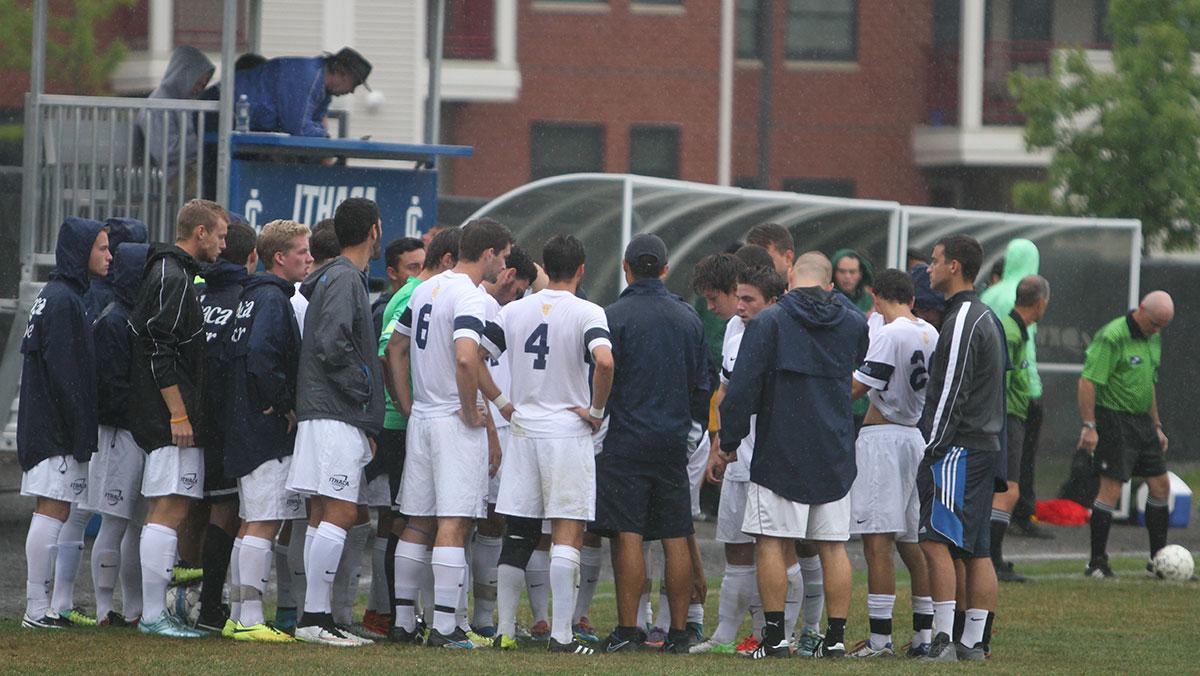 Sam Fuller/The Ithacan
Members of the men's soccer team listen to head coach Patrick Ouckama speak after its game Sept. 12. Mead Loop, in the Department of Journalism, is the newly initiated Faculty Athletic Mentor for the Bombers this season.
By Reed Keller — Staff Writer
Published: September 16, 2015

Excitement is brewing among the faculty and staff of Ithaca College, but not just because another school year has begun.

The Office of Intercollegiate Athletics recently announced the creation of the Ithaca College Faculty Athletic Mentor Program, designed to give student-athletes on campus another resource for help with their classes or answers to specific questions related to the college.

Students already have options when it comes to mentoring programs, from the IC Mentoring Network on LinkedIn to the individual academic advisers each student is provided.

Although those programs are flexible enough to meet the needs of everyday students, student-athletes pose a tougher challenge.

Facing the demands of long practice schedules, film study and matches, student-athletes have less free time to reach out to a mentor when facing an issue.

Barbara Belyea, the NCAA athletic representative for the college, said the FAM program was designed for this exact reason.

“This program is designed to enrich the academic and athletic experience and really tie the two together,” Belyea said.

To be most effective, the faculty representatives will work to build rapport with one team over the course of its season, attending games, practices and even banquets.

Despite the program’s focus on student-athletes, the hope is that these faculty representatives can serve as an additional resource for the coaching staffs as well.

Belyea said every faculty member she has asked so far has agreed to serve.

“I’m batting a thousand right now,” Belyea said. “But I think it just really speaks to how perfect an environment Ithaca is for this program.”

Susan Bassett, the director of Intercollegiate Athletics, said she expects the program to succeed as a whole in the future.

“I hope it builds strong support and emphasizes our commitment to academic excellence for our student-athletes,” Bassett said. “I expect there will be a period of getting to know one another, but we will do our best to support everyone involved.”

Associate Dean Bryan Roberts of the Roy H. Park School of Communications, who is the women’s basketball FAM, said even though the program is in its first year, it has plenty of potential growth.

“Everyone who gets involved will have a positive experience, and it will be a real testament to the awesome Division III student-athletes we have,” Roberts said.

“I would encourage the leaders of the club sport teams to reach out and become involved in this program,” Bassett said.

Sophomore Sage VanAmerongen of the women’s basketball team said she agrees the program is a great opportunity for the athletic teams to stay focused on their academics.

“I think that although athletics are a huge part of our lives, academics do come first,”  VanAmerongen said. “There is a mutual understanding between players and coaches on that, but not always between professors and players. Some professors believe that athletes value athletics more than their studies, and having this program will eliminate that belief.”

Mead Loop, an associate professor in the Department of Journalism, is the FAM for the men’s soccer team. He attended the first home game for the Bombers on Sept. 9 against SUNY Cortland. He said he had nothing but praise for this early in the program.

“I met with the team last week and we had some fun banter about the differences between American football and the European kind, also known as soccer,” Loop said.

Once underway, annual meetings will be conducted between the coaching staffs and their FAMs to assess the effectiveness of the program and how to improve it.

In the meantime, mentors have no boundaries preventing them from building the strongest rapport possible with their student-athletes.