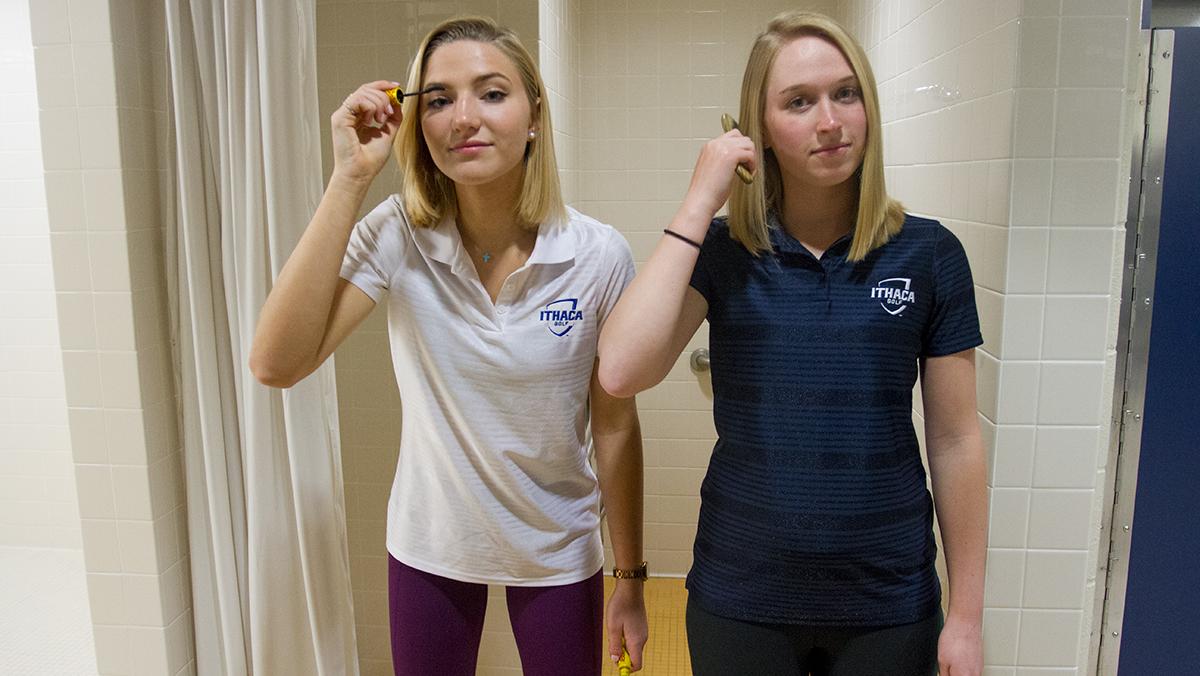 When a female athlete approaches the line, steps on the field, runs onto the court or dives into the water, studies find that the athlete might also be concerned with how she looks.

The way Michaela Cioffredi, a graduate cross-country and track and field athlete, prepares for a race has changed throughout her time at Ithaca College. From freshman through sophomore year, Cioffredi was worried about her appearance during races, so she would put on makeup and get her hair done. When she became a senior, she realized that listening to pump-up songs and meditating was more beneficial in preparing for a race, she said.

Like Cioffredi, freshman golfer Molly Walsh has her own way to prepare for matches.

“I definitely follow the quote ‘Feel good, look good, play good,’” Walsh said. “Looking good does have a positive impact on my confidence. I always have my nails painted when I play.”

Though the historic Title IX legislation was meant to ban discrimination in educational programs on the basis of sex, it does not eliminate the gender bias often associated with sports.

A study of 63 NCAA Division I female student–athletes called “Female College Athletes’ Perceptions on Gender Stereotypes and Discrimination in Collegiate Athletics” in the International Journal of Business and Social Science concludes that female athletes still face gender stereotypes and are more careful about how they look and behave in the eyes of the public than male athletes are. According to the study, women are tasked with performing to the best of their abilities while also exhibiting femininity due to the norms that are promoted by society.

Junior track and field athlete Georgia Caplen said social media is one of the key factors in making female athletes conscious about their appearances when competing.

“With social media, you see everyone on the front lines,” Caplen said. “You see how everyone looks. You see them training, and there’s pressure that results from that. But when it comes down to the individual, each person is going to do their own thing and feel confident in their own way. There are people who like to wear a lot of makeup and like to wear a lot of jewelry, but I think that you have to do whatever makes yourself comfortable.”

In addition to social media, teammates can also have a negative impact on how an athlete views body image and can have an effect on teammates’ eating habits, Cioffredi said.

“I began considering and worrying about my appearance during my freshman year at IC,” Cioffredi said. “This stemmed largely from hearing other girls on my team mention the types of foods or quantities of foods people ate in the dining hall. I felt like it was something I should be concerned about for myself in order to perform well.”

Walsh agreed that it is important to look presentable around teammates.

“I don’t compete without makeup on,” Walsh said. “You’re interacting and communicating with the girls on the team more, and you want to make a good impression on them.”

However, the International Journal of Business and Social Science study found that female student–athletes on some sports teams have begun to ignore the social construct that they must be feminine. According to the study, “Female gymnasts and softball players had embraced their athleticism … by not performing femininity in some social contexts. For example, they would choose to put little effort into appearance to maintain a feminine image.”

Similarly, senior Emily Vosburg, captain of the women’s crew team, said the way an athlete feels pressured to look is based on the sport they play.

“I think it comes with the nature of the sport,” Vosburg said. “I think that gymnastics and figure skating are judged on how they look, but if you look at a rower, you’ll see that they’re muscular and tall.”

At college, Vosburg made the track and field and cross-country teams, but she said she felt as though she was not physically built for those teams.

“I ran cross–country and track and field here freshman year, and they are both super competitive teams, and I felt like I wasn’t contributing,” Vosburg said. “I’m built more like a rower — tall and athletic. In cross-country, I didn’t have the typical body type.”

After realizing that the track and field team was no longer for her, Vosburg said, she found out about the women’s crew team and instantly knew it was for her.

“I saw posters around for the crew team, and I thought, ‘This is my chance,’” Vosburg said.

The study also found that female athletes who participate in individualized sports face fewer stereotypes than those involved in team sports. This is because many individual sports produce lean athletes, whereas many team sports foster strength and build muscle. However, Vosburg said this is not the case for the women’s crew team. The grueling early–morning lifts that the team endures promote togetherness and therefore does not promote stereotypes, she said.

“It’s such a tough sport, and you really bond over the tough workouts,” Vosburg said. “The nature of the sport lends itself to creating a family. We really bond over pushing each other because we want the whole team to strive to be better.”

Like the women’s crew team, the women’s track and field team has its own way of bonding, Caplen said. For example, its athletes wear ribbons in their hair during their postseason meets to foster togetherness, she said.

“They kind of make it feel like everyone is with you at the same time,” Caplen said. “It reminds you that you are running for something larger than yourself.”

Another added pressure that results from competition is when an athlete compares herself to another athlete. A New York University study called “The Female/Athlete Paradox: Managing Traditional Views of Masculinity and Femininity” concludes that when women gain muscle mass from athletics, they feel as though they are seen as fat by others and often engage in unhealthy eating habits as a result.

With regard to not comparing oneself to others, Caplen said it is important to remember what one is capable of accomplishing.

“There’s definitely times when you’re on the line and you see girls and you’re like, ‘Wow, she looks really fast. She looks like she’s the full package,’” Caplen said. “It brings you down for a split second, but you need to remind yourself that you’ve done the training, you’ve done the workouts, you know what you can do and you’ve just gotta go do it.”

Overall, the IJBSS study suggests it is important for a female collegiate athlete to wear and do what makes her most confident to perform to the best of her ability.

“If you have those certain socks that you wear or earrings, you have to feel comfortable in your own skin, and then you’ll be ready for the race,” Caplen said.