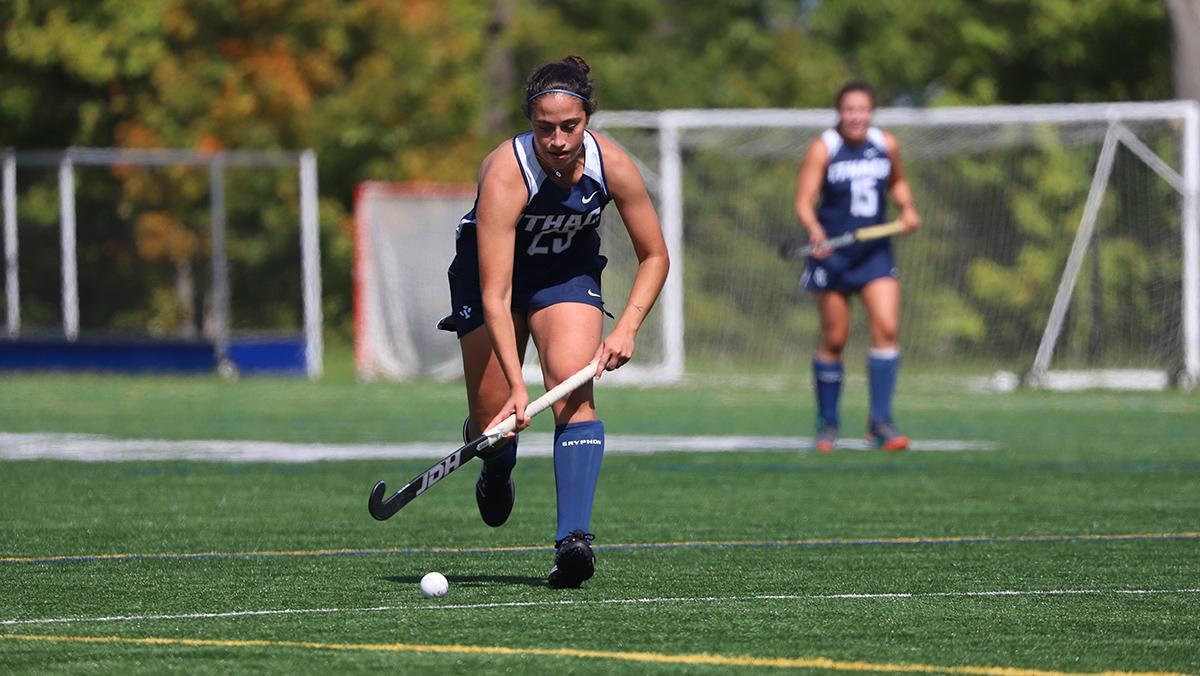 The Ithaca College field hockey team lengthened their impressive winning streak to eight games following a 5–0 shutout over the Skidmore College Thoroughbreds. The victory marks the first in matchup history in 10 all–time games and brings the Bombers’ overall record to 12–2.

The first quarter rendered some impressive midfield play from both teams, resulting in little possession for the majority of the quarter on either end of the field. Despite the slow pace, senior striker Morgan Mullen was an essential playmaker for the Bombers, earning many potential scoring opportunities early in the game.

Mullen’s efforts eventually proved fruitful when the Bombers earned three consecutive penalty corners during the final minute of play in the first quarters, the third of which put the Bombers on the board. Graduate student midfielder Jacqueline Mirabile put up the first point of the game, unassisted, with only 25 seconds remaining in the quarter.

The Bombers flipped a switch following halftime, sending the initial possession deep into Thoroughbred territory with a lofty aerial pass to start the third quarter. The frame grew increasingly more aggressive as both teams struggled to maintain significant possession, but the scoring dry spell was ultimately brought to an end when Mullen put the Bombers up second unassisted goal of the game off a penalty corner with 7:10 remaining in the quarter.

After some dominant offensive play by the Bombers to start the final quarter of the game, the South Hill squad earned their first penalty corner of the frame only 1:45 into play; although the attempt was unsuccessful, the scoring opportunities did not stop there.

Sophomore striker Natalie Descalso brought the Bombers to a 3–0 lead with a goal off a penalty corner halfway through the quarter. The goal, assisted by Mullen, solidified Descalso’s status as the team’s leader in points with nine goals and six assists on the season.

The Bombers were able to notch two additional points on the board within the final few minutes of play. After Mullen drove the ball deep into the circle, it was sophomore striker Emma Garver who was able to tip it over the goal line and hit the boards with just under six minutes remaining.

Shortly afterward, Mullen was able to find the twine in a quick breakaway resulting in a one-on-one matchup with the Thoroughbreds’ sophomore goalkeeper Victoria Bodnar. The goal, assisted by Descalso, solidified the Bombers’ 5–0 victory.

Associate head coach Mo Ordnung said it’s clear that the team is playing their own game again after four consecutive overtime battles on the road.

“The way we moved, the way we flowed … you could just tell that everybody was in sync,” Ordnung said. “It’s been a couple games since we’ve been that connected, so that felt awesome.”

Ordnung continued that this win will provide an essential confidence boost for her athletes as postseason play grows closer.

“When we’re focused and on and having fun and operating as a unit, we can do some really special things,” Ordnung said.

The Bombers will get back on the road when they next face the University of Rochester for an in-conference matchup at 4 p.m. Oct. 21.