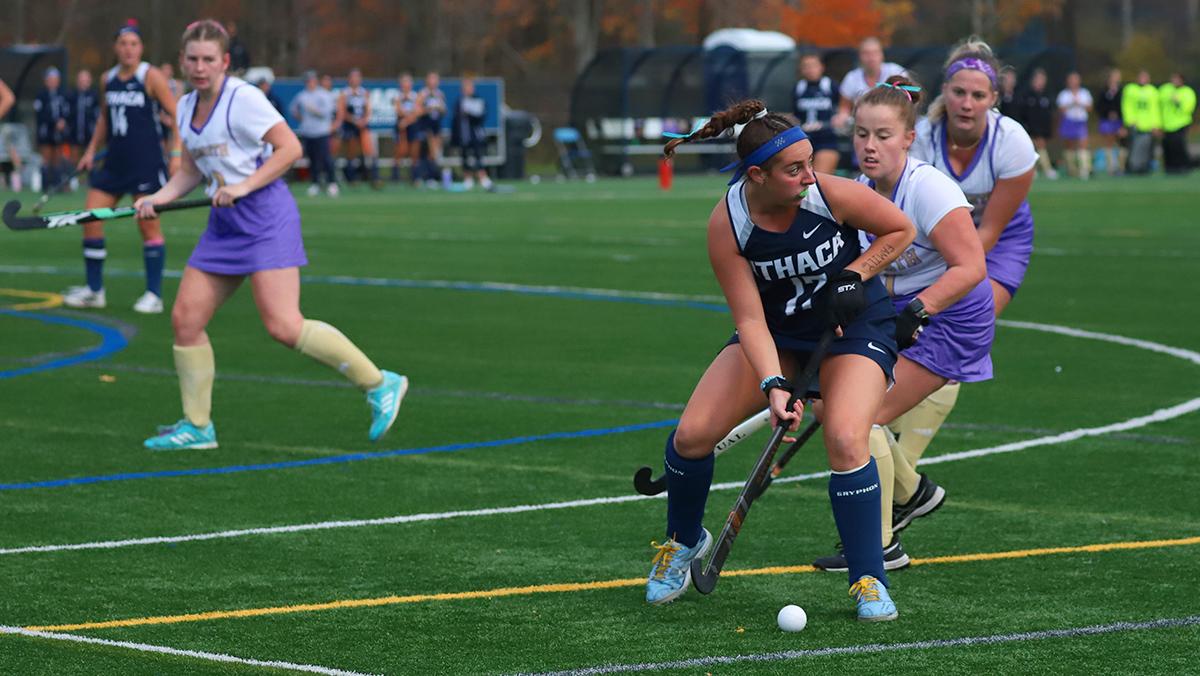 After wrapping up Liberty League play with a 2–0 win over the William Smith College Herons on Oct. 23, the Ithaca College field hockey team capped off its regular season with a dominant 4–0 shutout over the Nazareth College Golden Flyers on Oct. 26. The victory marks the completion of an undefeated regular season at home and improves the Bombers’ overall record to 14–3.

Although the majority of the initial quarter was spent in Golden Flier territory, the Bombers struggled to find offensive success. Senior striker Morgan Mullen was a key playmaker in the quarter, managing to put three shots on goal, but the Golden Flyers first-year student goalkeeper Madilyn Satter was dominant in net, ultimately holding the frame scoreless.

It wasn’t until the second quarter that the Bombers were able to settle into their game, immediately applying pressure on the Golden Flyers’ defense. The Bombers put an impressive four shots on goal before finally landing one. Senior striker Elizabeth Pillow was the first to put the Bombers on the board, finding the twine unassisted 5:49 into the quarter.

The Bombers continued to find scoring opportunities deep into the period, earning their first penalty corner of the competition with five minutes remaining. It was graduate student midfielder Jaqueline Mirabile who was able to execute the opportunity, giving the Bombers a two point lead to close out the half with a goal assisted by sophomore striker Natalie Descalso.

Following halftime, the Bombers continued to dominate possession, quickly earning three penalty corners only five minutes into the third quarter. Although unsuccessful, the scoring opportunities multiplied the Bombers’ offensive momentum. It was Pillow who added another point to the board, sending a lofty top-shelf goal into the cage 10:43 into the frame. The unassisted goal marked Pillow’s second of the competition and seventh of the season.

Entering the final quarter, the Bombers continued to showcase their skilled offensive play, managing to possess the ball in Golden Flier territory for the entire remainder of the competition. The Bombers put up an ambitious 11 shots on goal throughout the frame, ultimately coming up successful off of a penalty corner just five minutes into the frame when Mullen was able to hit the boards. The goal, assisted by junior striker Sarah DeVito, solidified the Bombers’ victory.

As they head into their postseason, associate head coach Mo Ordnung said that her team recognizes that they’re not quite done yet.

“This game was great,” Ordnung said. “A lot of people excelled and played some really good hockey, but now we’re ready to focus on what’s in front of us.”

Head coach Kaitlyn Wahila added that before their first playoff game, her team will have the opportunity to bring some fun energy to each practice.

“We’ll of course have a Halloween practice and a practice with some competition, but once next week hits, it’ll really be go-time,” Wahila said. “With the time that we have, I just think it’s super important that we keep every day enjoyable while playing at a high level.”

The Bombers will return to action when they rematch the Herons of William Smith College in a Liberty League semifinal game at 4 p.m. Nov. 4 at Higgins Stadium.