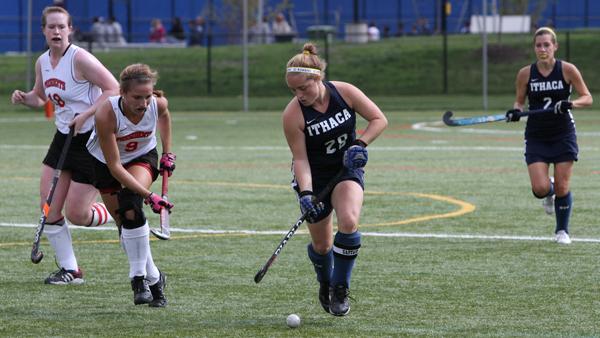 The field hockey team lost 4-2 against Washington and Jefferson College on Saturday. Both teams recorded seven shots, but the Presidents were able to take advantage of more opportunities in the circle.

The Presidents quickly put themselves on the scoreboard within the first two minutes of the game when a goal came in from a penalty corner. Building off of the momentum of the first goal, Washington and Jefferson quickly tacked on another goal from the top of the circle and finished the first half 2-0 over Ithaca.

“You always have things to work on, but today a lot things we’ve been working on finally came through,” Spencer-Blaetz said.

“The goal in the beginning of the game kind of shocked us,” Lash said. “I think we just needed to rebound a little quicker.”

The second half began similarly to the first. Another goal lifted into the back of the net for the Presidents with just about two minutes on the clock.

The Blue and Gold ended Washington and Jefferson’s hot streak by gaining their first goal of the game when freshman midfielder Meredith Delello capitalized on junior defender Andrea Pace’s pass into the circle.

The Bombers scored once more with a goal deflected in front of the goal by senior forward Julia Conroy, assisted again by Pace. However, the South Hill squad just could not catch up to the Presidents, who scored one more goal to put the game away.

“[We scored] two really good goals, and I think we can continue to do that more,” Lash said. “We just need to step up in the circle and really want the ball.”

A conference loss now puts the Bombers at 2–2 in the Empire 8 Conference bracket, however, they are still in the mix for the conference title at this stage of the season. Head Coach Tracey Houk said she sees the loss as an opportunity to grow and improve going into the next game.

“We are going to move to the ball more, stop the ball on corners and get some shots off,” Houk said.

Houk said the team will look to improve defensively by approaching the ball with the strong side of the stick and working on ball-side-goal-side defense.

The Bombers’ next opportunity to gain another Empire 8 victory will be at 4 p.m. Tuesday at Higgins Stadium.a