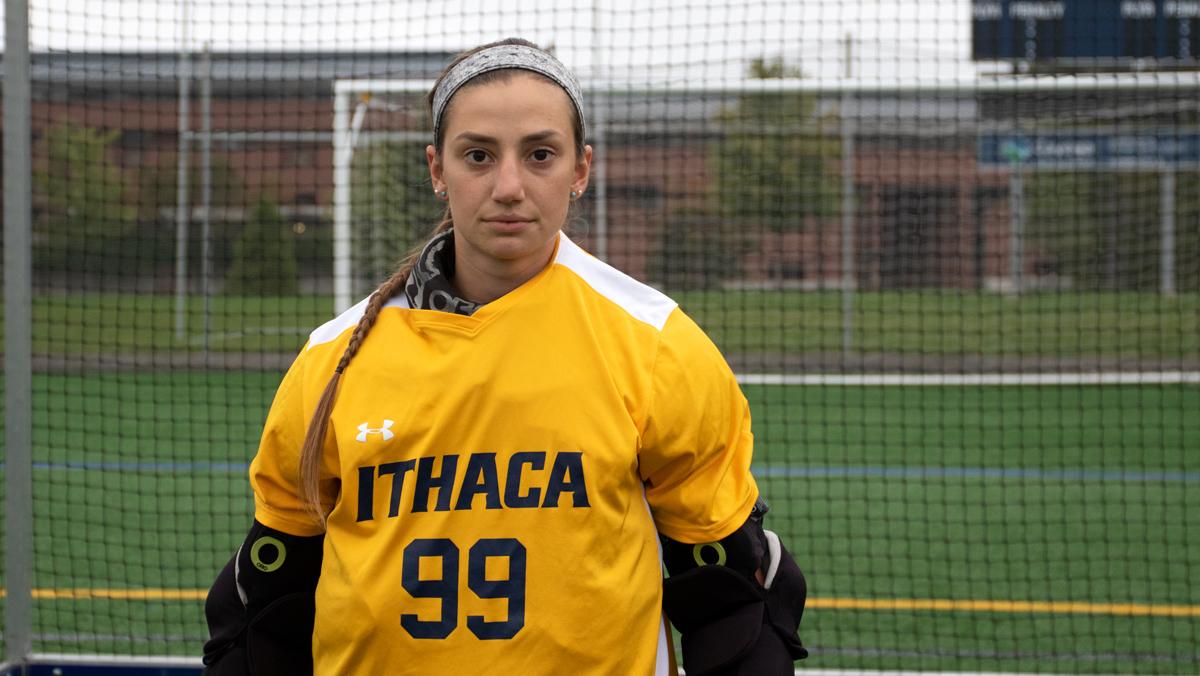 When junior goalie Savanna Lenker sees the ball fired off an opposing player’s stick, she knows she is the field hockey team’s only shot at keeping the ball out of the net.

Ever since her older sister asked her to pick up a field hockey stick in elementary school, she has been hooked on the sport. Middle school was when Lenker found her place on the field: in the goal. At the time, her team’s goalie didn’t show for a game, and Lenker was asked to fill in the position by her coach.

“It was kind of a chance thing,” Lenker said. “But now I can’t imagine playing anywhere else but in the goal.”

Lenker was recruited by the Ithaca College field hockey program out of Cedar Cliff High School, where she was a three–time letter winner for her field hockey team. She has been the Bombers’ starting goalie since her sophomore season and is currently 16th in the nation for goals against average and ninth for save percentage. She also currently has five shutouts through the first 10 games of the season.

However, Lenker has not always been a star on the team. Her freshman season was slow — she only saw playing time in two games. The starting goalie at the time, Katie Lass ’17, served as a big influence to Lenker that season and continues to be to this day.

“She is just an amazing goalie who had the respect of all her teammates,” Lenker said. “Katie is just one of the strongest, most ruthless people I’ve ever met. She played so hard every day and never cracked under pressure. And to have someone like that and to just be able to see her success was really impactful to me that first year.”

Lenker’s sophomore season was the start of her impressive career for the Bombers. Starting in 15 games, Lenker logged 109 total saves and posted a .779 save percentage at the end of the season. She also earned an All-Liberty League Honorable Mention for her performance during the season. However, with two freshmen goalies joining the team, Lenker knew her job was not guaranteed.

“I knew I had to prove myself,” Lenker said. “It wasn’t like I had my spot. I feel like I had to really work for it to get where I wanted to be.” 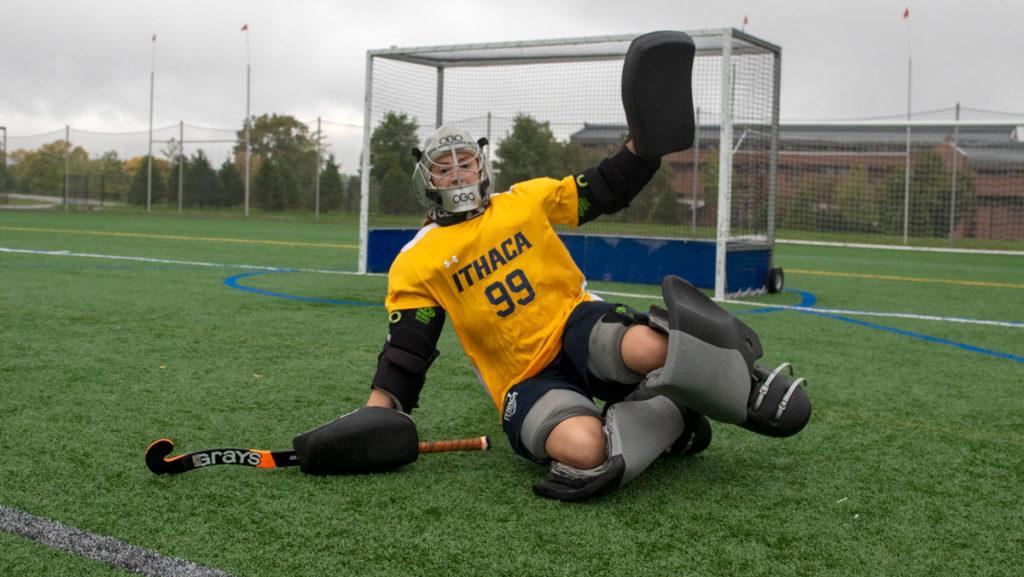 Savanna Lenker has a .779 save percentage this season.

Unfortunately, Lenker’s second season on the team came to an abrupt end. Toward the end of the season, Lenker was kicked in the head by an opposing player during a one-on-one at the goal. She was diagnosed with a concussion and had to sit out the remainder of the season.

“It was kind of hard to take a step back and see it all from the sidelines,” Lenker said. “But I feel like things like that make you appreciate the sport even more because I missed it so much during that short period of time.”

During the spring semester of her sophomore year, Lenker had the opportunity to study abroad in Costa Rica. As an environmental studies major with minors in Spanish and photography, she found a program in San Jose that had engaging classes in all the fields she was interested in.

Despite the absence of traditional workout equipment, Lenker maintained the team’s workout schedule in a local park.

“It was a little bit of an unconventional setting, but I made do,” Lenker said. “The park had one small pull-up bar, but that was about as technical as it got.“But I had to be more disciplined abroad because I wasn’t with my team, and no one was checking to make sure I was actually doing my workouts.”

Lenker trained hard over the summer and used the team’s summer workout packet to make sure she was ready for the upcoming season. The workout schedule included three days of strength training and four days of cardio. Usually, Lenker went to the gym or to her local high school by herself or with a friend to complete the workouts.

“It was definitely an adjustment coming back this fall because it had been so long since I had played,” Lenker said. “I think coming back from being abroad definitely made me set the bar higher for myself. I knew my team had been working while I was away, so I didn’t want to skip a beat. I wanted to be exactly where my team needed me.”

While studying abroad brought up some obstacles for Lenker, she said she felt the experience helped her become a better leader.

“I think, in some ways, studying abroad affected me a lot as a person,” Lenker said. “That was then translated onto the field as a player. I think I learned how to talk to any one of my teammates through the confidence I gained from studying abroad.”

Senior striker Meg Dowd believes Lenker bounced back from her absence well. She said Lenker stayed committed to the team and the sport even while she was away.

“She’s definitely one of the most supportive girls on our team,” Dowd said. “From her position, she can see the whole field, so she’s really good at giving feedback. She’s always the first one to say ‘pick it up’ or encourage you to have a more positive attitude if you’re down. Savanna just has a super bright personality and keeps us all super positive.”

After the Bombers finished 7–10 last year, both Lenker and her team were ready to come back to the field and compete.

“We knew where we wanted to go,” Lenker said. “We had clear goals set over the summer, and at the beginning of the season, everyone was on the same page. We are all committed 100 percent.”

This season, Lenker came back with a bang. Less than halfway through the season, Lenker has started in all 10 of the team’s games and has recorded 57 total saves. The team, with a record of 7–3, has already matched its total wins from last season.

Head coach Kaitlyn Wahila said she has definitely noticed a change in Lenker over the course of just two seasons.

“With another year of experience under her belt, it has enabled her to be even more focused and more in tune with how to be the best goalie possible,” Wahila said. “Savanna takes all her practice and puts it into game situations and is clearly very successful.”

Wahila spoke highly of Lenker both as a teammate and as a player.

“First and foremost, she’s a team player — she’s all about the team,” Wahila said. “But Savanna’s really a learner of the game. She takes as much as she can in regards to learning how she can be the best goalie she can be.”