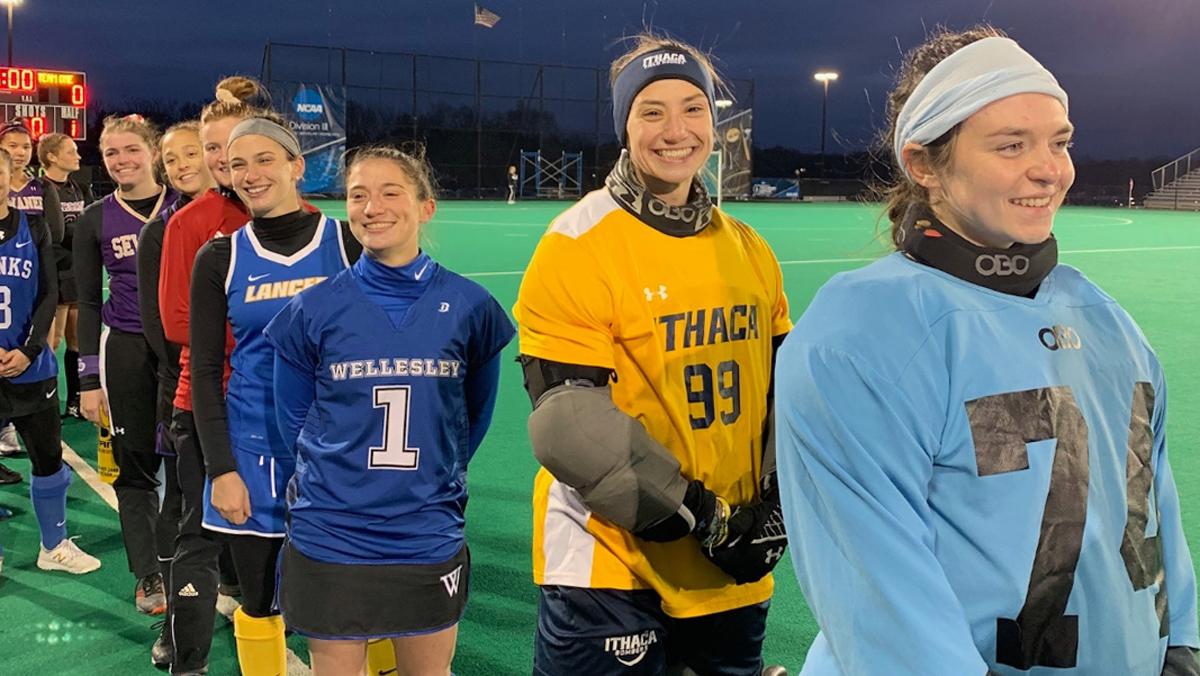 The senior game is an annual event held by the NFHCA to celebrate the best senior athletes in Division III field hockey. The organization selects 60 seniors to compete in the game from 150 squads around the country. Savanna was one of eight goalkeepers chosen for the senior game, and she became the first Bomber to receive the honor since 2016.

Savanna is from Camp Hill, Pennsylvania, which is approximately 40 minutes from the Spooky Nook Sports Complex. She said the experience was made more unique for her because her entire family was able to attend the game.

“It was weird to have my mom drive me to a game because I hadn’t had that experience since high school and club field hockey,” Savanna said. “It was so different. I was like ‘Woah, this hasn’t happened in a while.’”

Sierra, who played goalkeeper at Muhlenberg College, was the first person to tell Savanna that she had been selected for the senior game. She said she found out from her former college coach, who knew Savanna and texted Sierra to congratulate her sister. Sierra said it was exciting for her to see Savanna play so close to home.

“Coming up to Ithaca is awesome, but it’s so neat to be able to play so close to home, especially when some of these other girls are traveling from as far as Kentucky,” Sierra said. “It kind of seemed like a home game for us.”

Head coach Kaitlyn Wahila and assistant coach Mo Ordnung also accompanied Lenker to the game. Ordnung, who has trained Savanna all four years of her college career, said it felt different to watch her athlete play from the spectators’ sideline.

“It was the first time to really be able to watch her play and not have to worry about the outcome,” she said. “It was a weird role reversal for me, which was a lot of fun and a little uncomfortable.”

Ordnung spent one-on-one time training Savanna leading up to the senior game because the field hockey team’s season ended Nov. 6 with a loss in the Liberty League tournament to Rochester University. She said that, even though the competitive season was over, Savanna’s work ethic did not slow down.

“Leading up to the game, there was a day when we went out for an individual, and they usually last about 45 minutes,” Ordnung said. “An hour and 45 minutes into it, I had to stop her so that she could go on with her day.”

On gameday, Savanna competed with and against athletes who she had never met before, as well as regular Liberty League opponents. Her team was also coached by Michael Warari, head coach at league runner-up Vassar College. She said that playing with a brand new group of women was very challenging at the start of the game.

“It was certainly a learning curve,” she said. “We got some time to learn each other’s names quick before we were on the field together, and I played the first 15 minutes. We had a bunch of defensive corners, which you normally have a very distinctive strategy for, but we obviously didn’t have time to decide what that would be.”

However, Savanna said, the game also gave her the opportunity to connect with players that she has competed against for the past four years.

“It was cool when you were rooting for them,” Savanna said. “I was like, ‘Wow these players are really good.’ Not that I thought they were bad before, but you’re not rooting for them when they’re your opponent.”

The game was played in conjunction with the Division III final four and national championship games. Ordnung said that she and Wahila were able to observe and learn from the play of the top teams in the nation while supporting Savanna.

“The national championship games were really exciting because we were able to look and see what they were doing,” she said. “These high caliber teams were playing, and that’s something that we strive for. We didn’t get to be there as a team, which was a bummer, but we got to have one of our players on that stage, and hopefully, that’s setting a precedent for the future.”

Sierra said that the whole family stayed to watch the national championship game as well.

“It’s just cool to see top–level field hockey like that,” Sierra said. “Us being able to watch together is always really fun, and we hadn’t in a while, especially with Savanna as a spectator.”

Savanna said the game was a surreal way to end her collegiate field hockey career.

“It was obviously bittersweet, but it was really special to have my family and my coaches there,” Savanna said. “Everyone there was just rooting for field hockey as a sport, not necessarily for one team. It was really cool to see that community of Division III field hockey all together rooting for each other.”