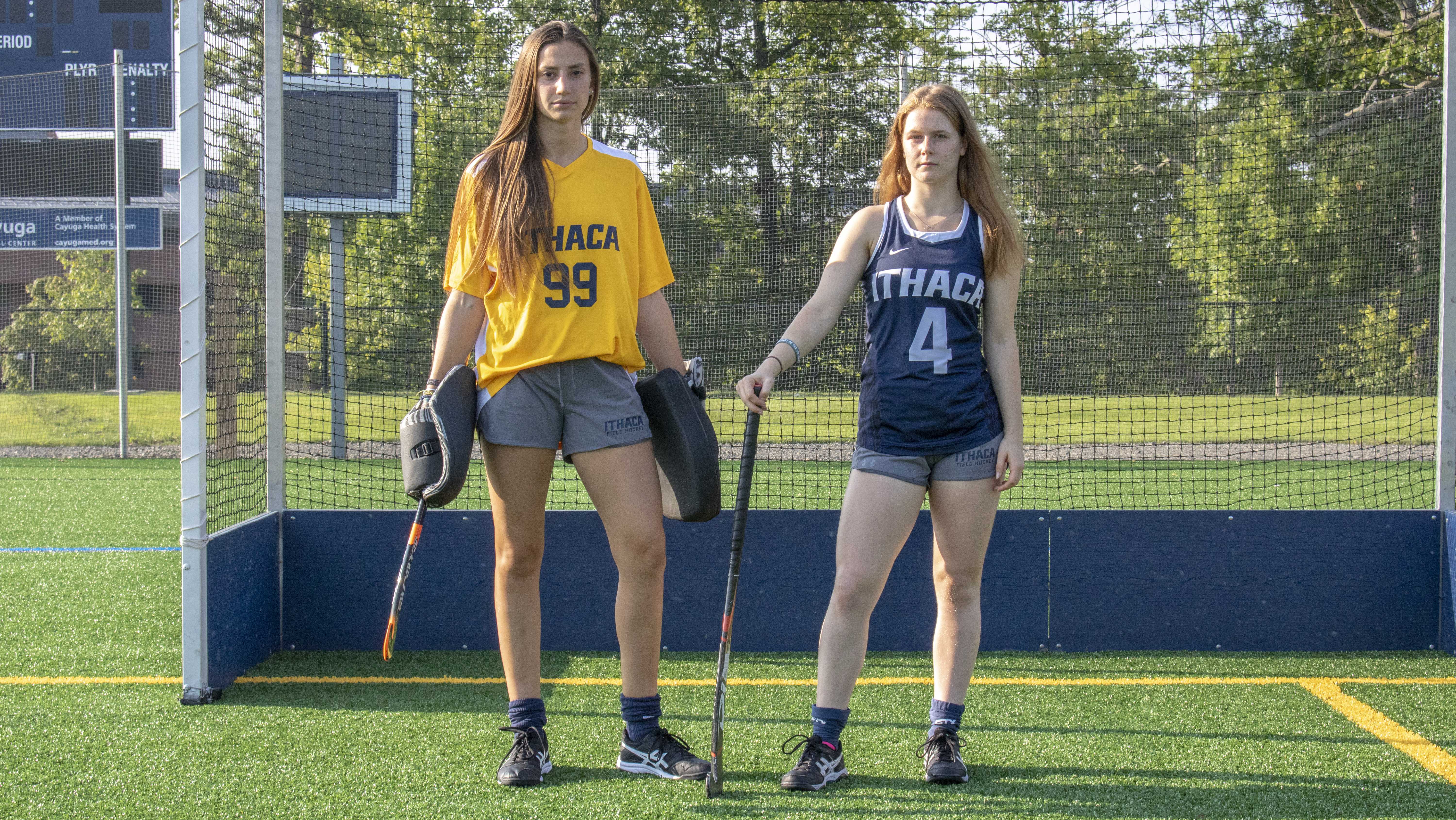 With a large senior class and an increased focus on ball possession, the Ithaca College field hockey team hopes to rebound and have a successful second season in the Liberty League Conference.

In the team’s debut season in the Liberty League, the Bombers finished with a record of 7–10 while finishing seventh in the conference with a 1–6 league record. Head coach Kaitlyn Wahila, who is going into her second year on the job, said she believes the Bombers have worked extremely hard to improve upon last season.

“Our expectations are always going to be to do the best that we can with the standards we are setting,” Wahila said. “We knew coming into this year that we would be able to set higher standards than last year due to all the hard work our athletes have put together over the past year, especially in the offseason.”

A key to the team’s success will be junior goalkeeper Savanna Lenker, who took over the starting role last year as a sophomore. Lenker said that learning under Katie Lass ’16 her freshman year helped her become a more vocal teammate last season. She said she believes that the adjustment period to a new coach and league is now over, and the team is poised for a strong season.

“Coach said from day one that this is going to be a special season,” Lenker said. “The experience that this larger senior class brings will be extremely helpful. Everybody is making the transition year after year by stepping up as a leader in their own class and even on the field in general.”

While the Blue and Gold finished below .500 last season, they had much more success at home as opposed to than on the road. The Bombers finished 5–4 in contests at Higgins Stadium, but struggled to a 1­­–5 record on the road while also finishing 1–1 in neutral site games. Since the Bombers are playing some of the best teams in the Liberty League at home this season, Wahila said she hopes that this will change some results from last season.

“We are in a really tough conference,” Wahila said. “It’s going to be really exciting to see how we compete against all of the Liberty League teams this year, especially since we play some of the top teams at home, including Skidmore, William Smith and Vassar.”

With every new season, a fresh group of first-year players will join the team, and this year is no different. The South Hill squad will have nine new freshmen suiting up, and Wahila said that this group is special to her because it is her first personal recruiting class.

The nine seniors returning to South Hill this season will allow the Bombers to have plenty of veteran experience on the field and in the locker room. Wahila believes that they will be a determining factor for how well the Bombers perform this season.

“We have three captains: Maddy Ryan, Maddie Keppel, and Meg Dowd,” Wahila said. “Those three are our captain leaders, but we fully expect that every senior in our program is going to continue to find a way to provide such great leadership for our entire team and program.”

Wahila also said how Keppel, Ryan and senior back Kimmy Briscoe will be crucial in helping the team maintain possession and allow the strikers to put themselves in situations to score. Arleigh Rodgers, who finished last season with 657 minutes played, said that she strives to take a more vocal approach this season.

“I took a quieter position last fall, being a freshman and new to the world of collegiate sports,” Rodgers said. “Now comfortable with the team and more confident of my position within it, I know one of my strengths will be to lead by example.”

The Bombers installed a new defensive scheme last season, and Wahila believes it was one of the positive aspects of last season.

“Our defense was strong last year,” Wahila said. “We had juniors holding down our defensive end, so we expect that to continue and improve this year.”

Rodgers said the coaches supplied the team with two manuals, a training manual and a performance manual. The purpose of the manuals was to serve as an extension of the coaches during the off-season, and she believes they will be critical to the team’s success.

“We’re moving toward more a team-oriented mindset this year,” Rodgers said. “We were in that same mindset last year, but we’re working to grow it every practice and game this season.”

Lenker said that last season’s struggles motivated the team to work extremely hard in the offseason to improve.

“We wish we had a better record last year, and we want to do better this year,” Lenker said. “We were motivated as a team and everyone came into the year already fit and are just trying to gel as a team and work together on the field.”

Home-field advantage can often be the difference between winning and losing, and the field hockey team is doing its best to establish its territory.