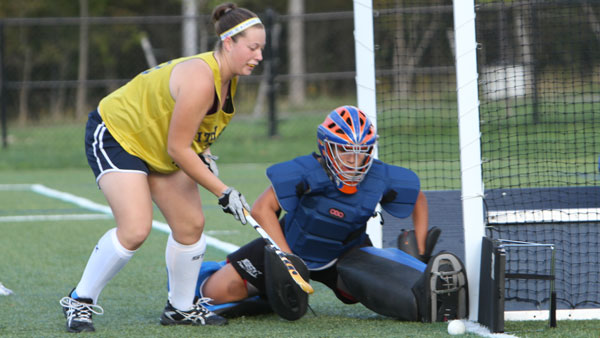 File Photo/The Ithacan
Goalkeeper Samantha Grassi '13 makes a kick save from a shot at the net. while sophomore back Caitlin O'Brien attempts to clear the ball away.
By Haley Costello — Staff Writer
Published: September 1, 2013

The field hockey team began its 2013 preseason training without anyone locked into one of the most essential positions on the field: the goalie.

The South Hill squad’s cage opened up after both of its goalkeepers, Kelly Singleton ’13 and Samantha Grassi ’13, graduated last season.

Now, the Bombers look to their new additions to carry the team to the Empire 8 Championship game. Sophomore goalie Blaire Janney is a transfer student from Alvernia University in Reading, Pa., and freshman goalie Katie Lass is an incoming student from Cherry Hill High School West in New Jersey.

Sophomore defender Laurel Shnider said while the squad’s former goalies will be missed, the incoming pair will develop into the goalies the team needs.

“They are new to us, but we have been telling them things to work on — for instance, we need to communicate,” Shnider said. “They have been really stepping up, and we have all been listening to each other, so we have been working great together.”

Singleton started all 18 games for the Blue and Gold in 2012, where she recorded 127 saves and finished with over 1,116 minutes in the net. She completed the season with a .726 save percentage.

Junior back Sarah Pfeifle said Singleton was a dependable goalie who provided a great sense of relief for the Bombers’ defense.

“Losing her was really difficult, especially for the defensive line,” Pfeifle said. “Not having that steel ground that we had been so used to having is a little scary for us.”

The South Hill squad’s alternate goalie, Grassi, played 156-plus minutes in the cage last season, only giving up a single goal. She capped off her Bombers field hockey career with a 0.45 goals against average and a .900 save percentage.

Senior Andrea Pace said the loss of Grassi as a goalie also meant the loss of a strong team leader — something the squad needs to compensate for.

“Grassi was one of the strongest leaders on the team,” Pace said. “We definitely need to find a goalie that can step up and have the same leadership that Grassi had.”

Pfeifle said while Janney and Lass are new to the team, she is confident in their mental strength to develop new skills, as well as their love for the game. Pfeifle said the Blue and Gold goalkeepers have displayed great agility and control in the net, making them strong enough to stop anything that comes in the Bomber’s circle.

“They have come in with a lot of passion and a lot of energy,” she said. “They look really ready to take on the challenge of filling in that spot that we so desperately need right now.”

In addition to their strong skills, Janney and Lass have also demonstrated one of the most important traits for any goalkeeper — communication. Shnider said the goalies are the only athletes on the field who can see everything, so the Bombers’ success is dependent on helping the defense match up in front of the net.

“It’s very crucial, because they control everything that way,” she said. “When they are looking and talking, they can tell us what we need to do, and they have gotten much better at that already.”

Pace said even though it is still the preseason, the squad has already seen some important signs from its new goalies, which she believes is promising for a team that has set a goal to make the Empire 8 playoffs.

“Just from scrimmaging and practice, I can just tell the positive, directive communication from them already,” she said. “I know they are both going to be a good support behind us, and we have good faith they will get the job done.”