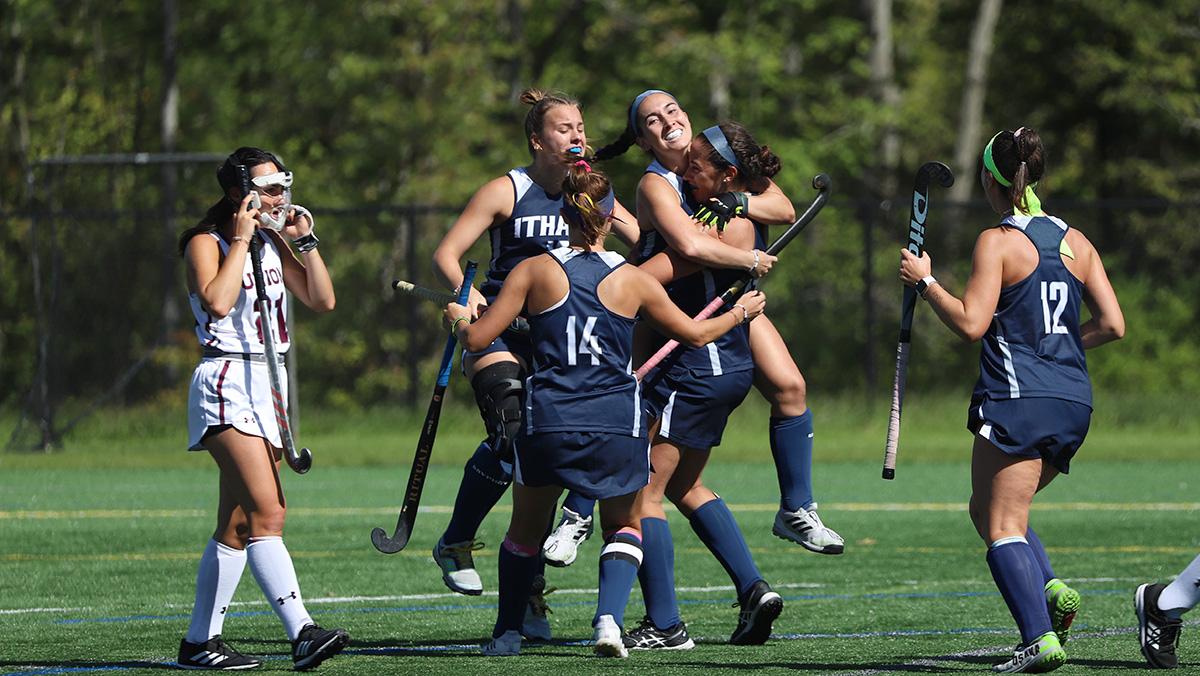 The team matched its regular season win total from last year, tied for most wins in a single season under head coach Kaitlyn Wahila since she took over in 2017. Wahila said she is proud of the performance the team showed this season, including how they responded to losses.

“We have three losses, you know, throughout the season, and I think every single one of them served a very specific purpose and has gotten us to the point where we are right now,” Wahila said. “This team has gotten better with every single opportunity that we’ve had to compete. And we have not taken a step backward with any of our games.”

Wahila said the team experienced a low point following a loss to SUNY Cortland in overtime by a final score of 2–1. The Bombers then came out and dropped a 2–1 game to SUNY Brockport. Wahila said these two games were needed in helping spark a fire under the team.

“I look back to our season, and this team has gotten better with every single opportunity that we’ve had to compete,” Wahila said. “We have not taken a step backward with any of our games. So I am just super proud of us and being able to maintain that mentality of ‘let’s get better with each game.’”

The season included many different accolades for individuals on the team. One of them was sophomore striker Natalie Descalso. Winning field hockey offensive performer of the week for the Liberty League on Oct. 17 and named the National Field Hockey Coaches Association offensive player of the week Oct. 19, Descalso said she is proud of the growth from her first year to now.

“As I got more comfortable and connected with the team more, I just feel like through the spring season and working really hard in the summer, and I just felt really confident coming into this season,” Descalso said.

The team also wrapped up an undefeated season at home for the first time in the past two decades. Graduate student midfielder Jacqueline Mirabile said that while it skipped her mind that the Bombers were undefeated at home, having that accomplishment is something to be proud of. She said that defending the home field is always important.

“It’s awesome,” Mirabile said. “We love playing in front of our fans. We love Higgins. It’s just a great feeling.”

After defeating Nazareth College 4–0 Oct. 26 at Higgins Field, the team is preparing to host William Smith College in the Liberty League semifinal at Higgins Field on Nov. 4. Mirabile has been to the playoffs with the program since joining the squad in Fall 2018, totaling four times including this year. Mirable said the consistency of making the playoffs is something to be proud of and is excited to be in it once again with this current squad.

“We have a core group of veterans here, people coming back. So that’s very helpful,” Mirabile said. “But this team bonded really well together and we’re just super excited and going in.”

The team made an impressive run in the Liberty League playoffs last year, falling short to Vassar College in overtime during the championship game by a final score of 2–1. With the Bombers set to host the Herons, Wahila said she believes losing in the championship game last year will be used as a form of motivation this year, but said the team knows not to look back to the past. Descalso said that while the team will be thinking of last year’s ending, the team is focused on this upcoming playoff run and is hoping for a different ending.

“We’re using last year as fuel to really push ourselves and we know how hard we’ve worked this whole season,” Descalso said. “We know that we can do it if we all stick together as a team and just continue working hard. So it’s just going to be a matter of everyone just continuing to give 100% and just believing in ourselves.”

While playing a team you already beat has its advantages, Mirabile said the team must stay focused on the Herons as anything is possible during the postseason.

“It’s really important that we stick to our game plan and come out real strong in the first and play a strong four quarters,” Mirabile said. “They can come out with a whole different game plan. So we just have to be ready for any aspect of the attack and their defense.”

Wahila said she is excited about the rematch against the Herons. Wahila said that while the Bombers were undefeated at home, the Herons also had a perfect record during their home contests on the season. She expects a fun contest between the two sides.