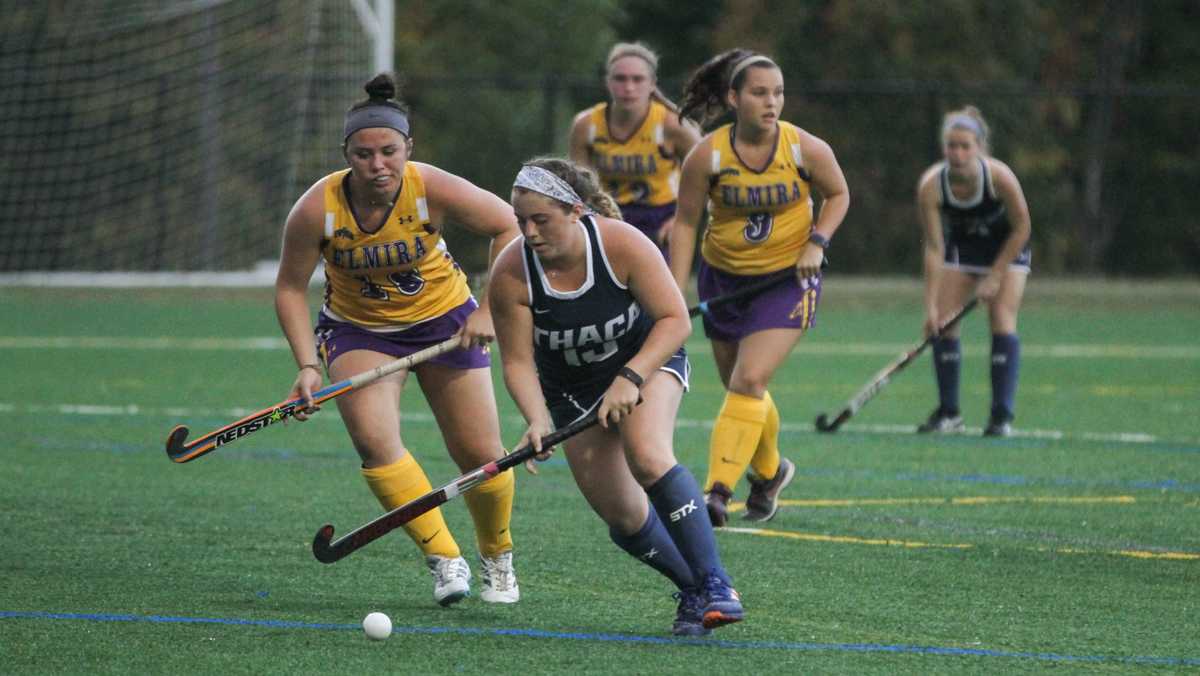 The Ithaca College field hockey team defeated Elmira College 5–0 in a non-conference matchup Sept. 27 at Higgins Stadium. The Bombers came out flying, scoring twice within the opening five minutes of the game.

Senior striker Michaela Donohue had five points and junior striker Meg Dowd had four points in the game. Donohue ripped a shot on Elmira goalkeeper Julie Hockenberger, and a broken play in the front of the net allowed the crashing Dowd to fire it home. Fifty–eight seconds later, Dowd passed across the cage to Donohue, who made a quick turn and scored her 7th goal of the season.

The Bombers continued to dominate play, making Hockenberger work. Hockenberger was very aggressive  and stifled many quality scoring chances, including a hard shot from senior midfielder Amanda Schell and a quality dangle from sophomore striker Brooke Novello. Elmira forward and midfielder Atu Machika was relentless in the defensive zone, breaking up numerous plays before they could develop. She also showed offensive talent as well, finessing multiple passes from the defensive zone to the strikers and also joining the rush.

For the Bombers, junior back Shelby McDavid and junior midfielder and back Kaylou Stoddard stepped up early on Elmira’s strikers and continually kept the ball out of Bombers territory. The South Hill squad extended their lead to three when Dowd passed a corner to junior midfielder and back Maddy Ryan. The Bombers’ net front presence was overwhelming for the Elmira defenders, and the momentum continued into the second half.

The South Hill squad made it 4–0 when freshman striker Maya Rodgers tapped in a shot from Ryan. The tip-in was Rodgers’ first collegiate goal. At 63:21, sophomore striker and midfielder Kendall Keil found Donohue, who scored another goal. The Bombers carried play the rest of the way  and were able to secure the shutout for sophomore goalkeeper Savanna Lenker, the first shutout of her college career.

“I was really happy with our ability to finish today,” Wahila said. “We put pressure on them when we attacked, and stayed composed defensively, only allowing 5 corners. Maya Rodgers scored her first goal, which was great to see. We hope this game will help us for this weekend.”

Elmira head coach Lauren Silva was complimentary of the Bombers.

“Coach Wahila is running a great program in her first year,” Sylvia said. “They were strong and simply beat us today.”

The South Hill squad is back in action at 3 p.m. Sept. 30 at Higgins Stadium against St. Lawrence University.

Field hockey wins second game in a row against Hartwick