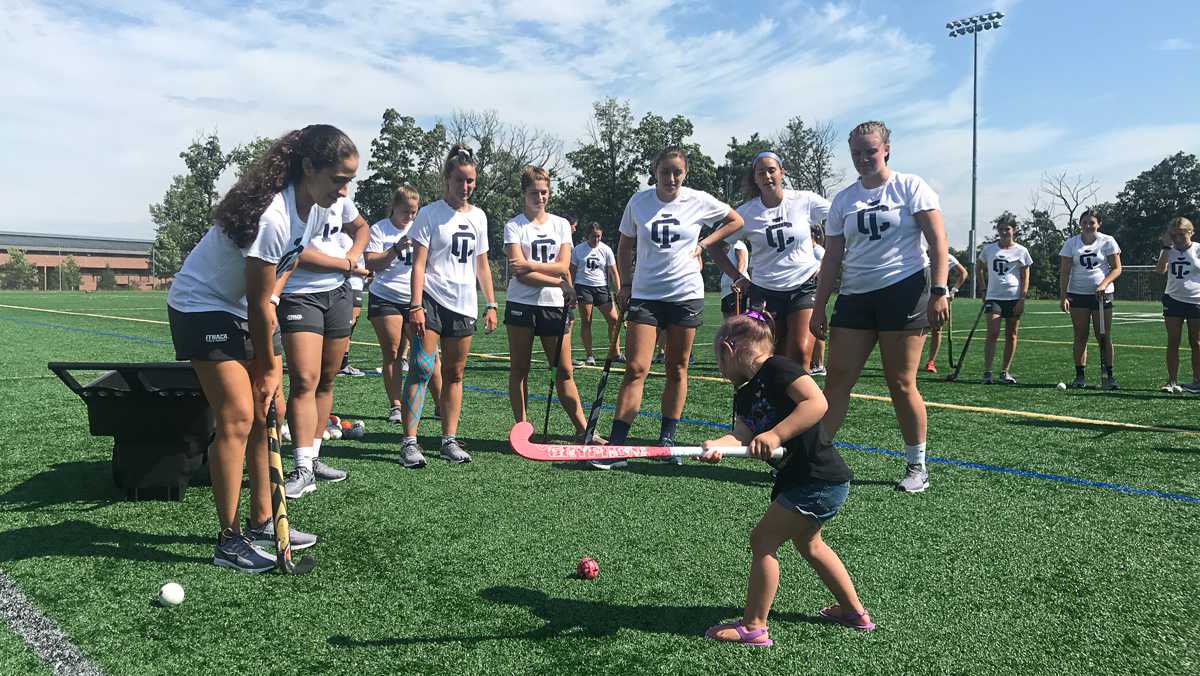 After the adoption ceremony, the Bombers showed Nora her own decorated personal locker in the locker room. They also gave her a field hockey stick and backpack for the new school year. Zelko got the chance to go out onto the field and run through some drills with the team along with some playful duck-duck-goose games.

Sophomore striker Kyra Feick said this experience is unlike anything the team has done.

“We do a lot of community service on our team, but I don’t think we’ve ever done something so personal or big,” Feick said. “I think it means a lot to every single one of us and especially our coaches. It’s really great.”

The relationship stemmed from the Friends of Jaclyn Foundation, an organization created to help brighten the lives of children who have brain tumors and cancer. The foundation was created in 2004 for 9-year-old Jaclyn Murphy. After receiving the news that she was diagnosed with a malignant brain tumor, Murphy became an honorary member of the Northwestern University women’s lacrosse team. In 2005, Jaclyn and her family started the foundation to support other children with similar challenges.

Zelko’s mother, Ashley Bailey, said that at first, Zelko’s cancer was less life-threatening, but it has since progressed.

“At the beginning, it was low risk,” Bailey said. “After they did the biopsy at two months old, it was considered stage 4S. She was like that for the first 18 months, and then she relapsed at 18 months old with a tumor in her right ear canal.”

Stage 4S is a special form of neuroblastoma in which only one side of the body is affected and cancer has not spread significantly into the bone marrow, liver and/or skin. When Zelko relapsed, her neuroblastoma was high-risk stage 4, which meant cancer had spread to her distant lymph nodes, liver, skin and bone marrow.

However, thanks to the Bombers, Zelko now has 25 more supporters cheering her on. The team has sent Zelko videos on treatment days, and she will also attend practices and games whenever she is able. Bailey said the positivity keeps her daughter moving forward through the difficult times.

“She loves having a team of girls behind her,” Bailey said. “It just helps her when she’s having rough days, she’ll see that and know that they’re behind her. It gives her that little extra boost of confidence and makes her feel special.”

Erin Stimson, executive director of the foundation, said many people do not realize that the children often lack social support because of their health.

“Really what we try and do is give these kids something to look forward to — a place where they feel they fit in and that they’re wanted,” Stimson said. “A lot of these children, through their diagnosis, will lose 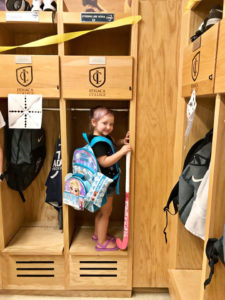 Zelko checks out her new locker and field hockey stick in the Bombers’ locker room.

friends. They don’t get to be around their peer groups, and they’re isolated because of their health.”

Bailey started a Facebook page titled “Strong like Nora — a fight against Neuroblastoma” for other people to follow her daughter’s story. The page has over 3,400 likes and 3,600 followers.

“I started Nora’s page about six months into her journey,” Bailey said. “I wanted to share the good and the bad. I wanted to raise awareness and show how not rare it is. Not only do I share what’s going on with Nora, but I share a lot of our friends’ journeys and the amazing families we’ve met along the way.”

Field hockey head coach Kaitlyn Wahila said the team was inspired by fellow athletes and teams that had similar partnerships.

“I had a couple of players ask if that was a possibility because they had friends who were doing the same things with their collegiate teams,” Wahila said. “I contacted Friends of Jaclyn, and they said, ‘We’ll put you on a list.’ It took maybe six months to a year to when they contacted me that they had Nora, a little girl. They asked if we wanted to initiate the relationship, and we said absolutely.”

Feick said the whole process for the team has been eye-opening.

“It’s really put us into perspective of how lucky we are,” Feick said. “And we all have become so grateful for our own lives. I see Nora having to go down a different path than we had to go down. I think it’s brought a lot of positivity as well.”

Zelko and Bailey live in Horseheads, New York, which is approximately a 40-minute drive from Ithaca, so Bailey said it is fairly easy for Zelko to spend time with the team. Zelko also has a 6-year-old brother, Jackson, who got to meet the field hockey team and play with them alongside his sister.

“As long as our schedule is all in check, I plan on taking both kids to most of the games as often as we can,” Bailey said. “We want to show our support to the team.”

As much as the team motivates Zelko, Wahila said Zelko’s presence on the team has been inspirational for the players and coaches as well.

“The effect she’s had have been motivational and influential just by us knowing what she’s gone through,” Wahila said. “When you think you’re having a bad day, we think of Nora, and we think of all the challenges she’s had in her life, and it really gives us that bit more motivation to get through a practice or a sprint or to make it to the last couple minutes of scrimmage.”