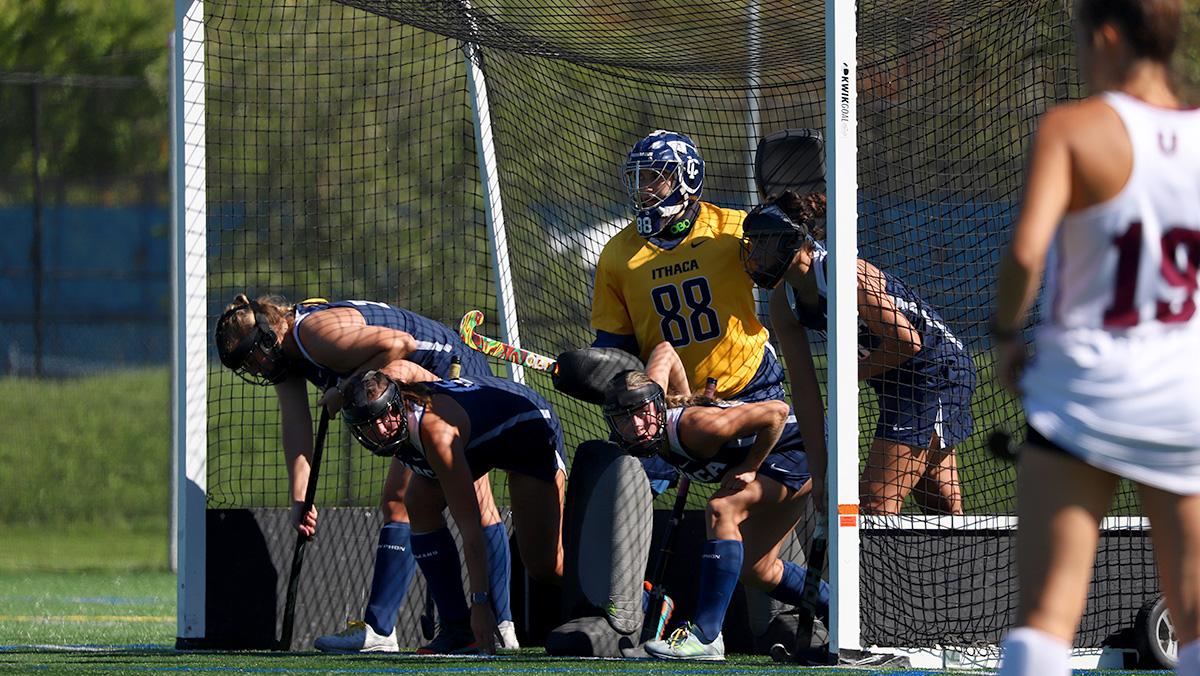 Brendan Iannucci/The Ithacan
Ithaca College Field Hockey is off to a 5-2 start on the fall 2022 season. Through those 7 contests, they have outscored their opponents 19–7 in part to the strong defensive showing from the Bombers
By Tess Ferguson — Staff Writer
Published: September 28, 2022

As the Ithaca College field hockey team enters a streak of Liberty League play with six of its next 10 games in the conference, the Bombers explosive start to the 2022 season has been propelled by some widely unsung heroes.

The Bombers’ early season successes were led by a strong defensive line that has held their opponents to only seven goals allowed over the course of seven games. The Bombers hold the best record for the statistic in the Liberty League, tied with the William Smith Herons as of Sept. 26.

Maureen Ordnung, associate head coach, is a former Division II collegiate goalkeeper who has served as the Bombers’ defensive coordinator and goalie coach for the past seven seasons. She said her affinity for the sport allows her to connect with her players on a deeper level.

“My degree is in education, but being a coach lets me teach in a capacity that I’m a lot more confident in,” Ordnung said. “Everything just translated from the classroom to the field.”

Graduate student goalkeeper Macy Brandwein said that having a coach who formerly played her position is a huge asset that not many other programs have. Brandwein, in addition to junior goalkeeper Alex Clough and first-year goalkeeper Shannon Dougherty, spends most of her practice time advised by Ordnung.

Ordnung said she values the time she spends with her goalkeepers and how important it is to have somebody who understands the position firsthand.

“Being a keeper can be a really isolating job sometimes,” Ordnung said. “Understanding how heavy it is to hear that thud on the boards — especially in an overtime game when there’s simply no more control to be had — and being able to be there for our keepers I think is really helpful.”

As the core of the Bombers’ defensive line, Brandwein’s place in cage is a front row seat to all of the action on the field. She said her communication with her teammates is essential to the success of the defensive field players.

“We have a really good connection on the field and that kind of trust is super important when it comes to winning games,” Brandwein said.

Outside of fouls, cards and goalie saves, defensive statistics are not easy to tally. Graduate student defender Allison Egan said the defense’s role on the field can sometimes be overlooked.

“Of course it’s cool to score the goals,” Egan said. “But stopping them is such a huge part of our game that I really love.”

Egan said that if nothing else, the Bombers are definitely aggressive. The circle defenders’ connection with Brandwein assures the unit that there will never be any surprises.

“There’s a ton of communication, especially between our goalies and low defenders in the circle,” Egan said. “It’s so important to know who’s where and who needs to be doing what.”

The essential communication, however, does not stop at the 50-yard line. Egan said her defensive line’s intensity transitions to the offense just as quickly as the ball does.

“It takes everybody on the field to score,” Egan said. “Even the mentality that we’re never going to give up comes from our backfield and, as the ball comes up the field towards our attack, so does that energy.”

Graduate student midfielder Jacqueline Mirabile has been a true two-way force for the Bombers this season. She said her role in full-field transition has the potential to be game changing.

“I love distributing the ball; I really love being a playmaker,” Mirabile said. “Playing in the midfield is like having the best of both worlds, so I get to strengthen my team’s defense while finding holes in that of our opponents’.”

Mirabile explained that the Bombers’ defense begins in transition, when the offense turns the ball over and are forced to go back and play defense, her midfielders always give their all to regain possession.

“We’re definitely some of the hardest workers on the field; we’re constantly working to keep the ball out of the circle,” Mirabile said.

Ordnung said that it is important to note that defense is prevalent all over the field, as there is no offside penalty in field hockey.

“Every line, whether it be our strikers, midfielders, or defense, has their own goals, and I think we’re doing really well at working together toward a common one,” Ordnung said. “We’re doing a really great job at smothering and pressuring our opponents; we make them feel like they don’t have any options.”

With a slew of in-conference games coming up, Egan said it will be essential to focus on one opponent at a time.

“Thinking about the Liberty League Championship isn’t going to help us win our next game, it needs to be a step by step process,” Egan said.

The Bombers will continue to work on their chemistry and playing their own two-touch game. Mirabile said that as long as they keep working, she is confident in her team’s prospects.

“There’s always room to improve when it comes to working as a cohesive unit,” Mirabile said. “The more time we spend on the field, the better we’ll get at it.”