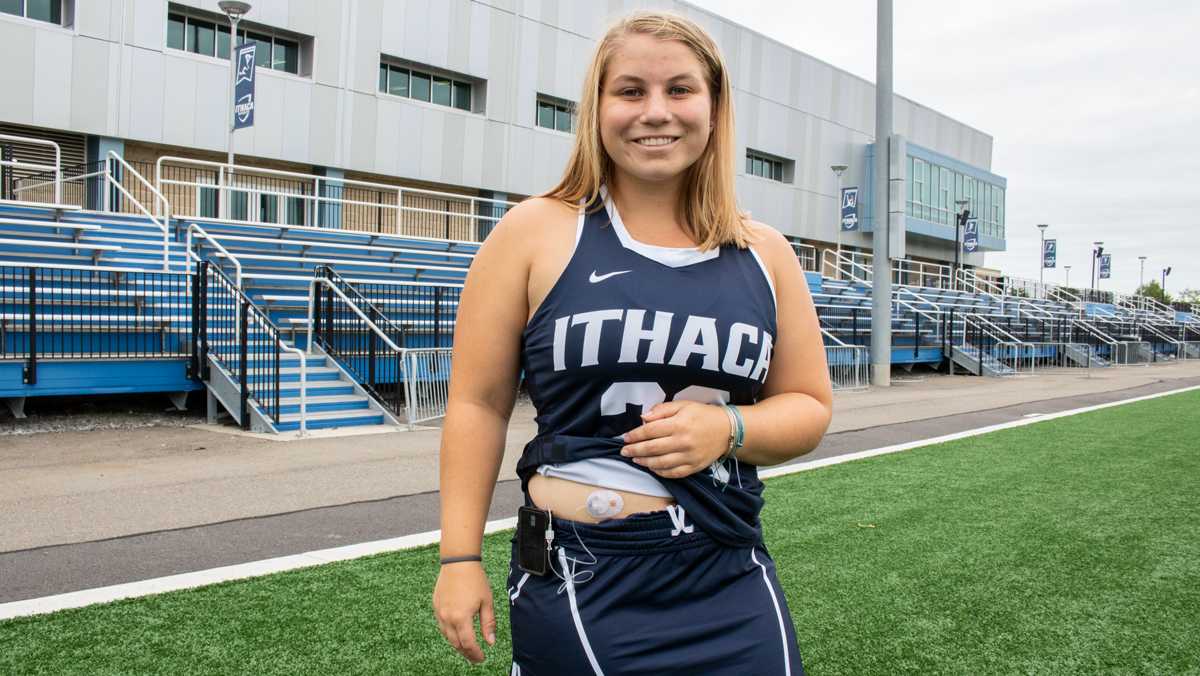 One morning while in high school, freshman field hockey player Kyra Feick woke up feeling sick but went to school anyway. She spent the entire day throwing up, and as a diabetic, she knew her blood sugar was skyrocketing. No matter how much insulin she pumped into her body, nothing improved.

It turned out that Feick’s insulin pump stopped working while she was sleeping the night before, causing her to go without insulin in her body for over eight hours. Feick said she normally starts to feel sick if she goes without insulin for more than three.

“We changed my site five times, and I was throwing up the whole day,” Feick said. “It wasn’t until after I went to the hospital that I learned my pump wasn’t working.”

Feick, who plays for the Ithaca College field hockey team, was diagnosed with Type 1 diabetes when she was 7 years old. At the time, she was so young that she could not give herself her own insulin shots and needed her parents to assist her every time.

At the age of 12, she began using a permanent insulin pump. Feick’s insulin pump is worn outside of her body near her stomach and pumps small doses throughout the day. Her pump is connected to a tube called a catheter that delivers the insulin into her body. She said she did not start out with the pump because everyone is required to start with insulin shots, but she is glad she is now using the pump.

“It’s so much easier,” Feick said. “If my number is high or my blood sugar is high, I’ll put it in and the pump will correct it or just give me insulin for carbs instead of me having to sit down and try to figure it out.”

Feick said she likes her blood sugar to be between 100 and 160 because that’s when she feels her best. During practice, she will check her levels constantly to make sure her blood sugar does not go too high or too low.

If her number does fluctuate, Feick said, she will know because she will start to feel lightheaded and dizzy while she runs. If this happens, she’ll have to stop practicing, and she cannot come back onto the field until it’s fixed. In case her number drops drastically low in a short period of time, Feick keeps fast-acting carbs like glucose tablets and juice in her bag.

Feick competed in gymnastics before she was diagnosed. When she started having to watch what she ate and always pay attention to her insulin, it became harder to compete.

“Adjusting my whole life with such a competitive and time-consuming sport on top of it was really difficult,” she said.

When she was 10, Feick started playing field hockey. She played field hockey in high school all four years and won a Maryland State Championship in 2015. She said the switch to field hockey made it much easier for her to handle her diabetes because the practices were shorter, and it was easier to take breaks.

“I wasn’t aware of her condition,” Wahila said. “I actually had no idea that she had diabetes and was a little bit worried about how this would work — would she be able to be at full effort every single day at practice? After seeing her, she does not have any inability to do anything. She doesn’t let her condition get in the way of doing her best at practice.”

Added on to her pump is a patch that she keeps on her shoulder. Feick said the patch acts as a sensor if her blood sugar gets out of range and will not only alert her but her parents as well.

“[The patch] connects to my pump and my phone,” Feick said. “So, my parents get it through my phone too, and when I’m asleep and there’s a problem, they can call me, and I can fix it.”

Freshman midfielder Grace Ziehnert, who is a teammate of Feick’s, said that even though Feick has diabetes, she does not let it affect her while playing.

“Kyra has a strong mentality and does not let her diabetes become a distraction,” Ziehnert said. “She is aware of her situation. However, that does not prevent her from competing fiercely on the field.”

Feick said that so far at the college, the people around her have been extremely understanding of her condition and try to work with her at all times.

“The coaches are awesome, and the athletic trainers,” Feick said. “They always tell me that whatever I need, they’re here for me, which is really great.”