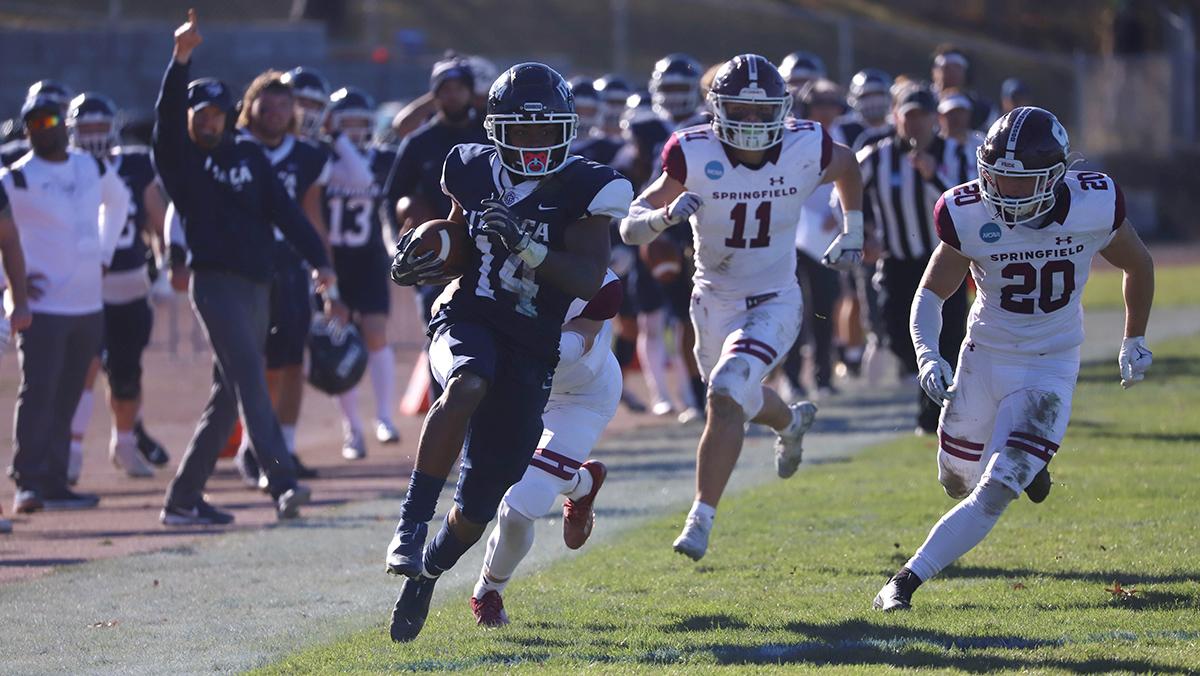 The Ithaca College football team defeated the Springfield College Pride 31–20 in the second round of the NCAA Championship on Nov. 26 at Butterfield Stadium. The victory advances the Bombers to the National quarterfinals for the first time since 2003 and improves the college’s overall record to 12–0. 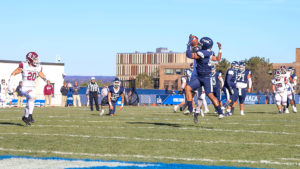 Senior tight end Jon Crowley makes a jumping grab in the first quarter to set the Bombers up for their first touchdown of the game. Aidan Charde/The Ithacan

The Pride’s offense had a productive afternoon, recording 252 rushing yards and 51 passing yards. The South Hill squad’s defense was ultimately able to limit the opposition, shutting the team out in the second half and holding it to converting just four of its 10 third down opportunities. Senior defensive back Derek Slywka led the Bombers with 10 tackles.

Springfield made a statement early in the contest, taking a 7–0 lead over the Bombers just 2:05 into the game. Senior quarterback A.J. Wingfield and the college’s offense faced second and seven at their own 43-yard line, but the quarterback’s pass was intercepted by senior linebacker D.J. Brown and returned to the end zone for a touchdown. Senior kicker Christian Hutra then converted the extra point attempt.

Wingfield said in the postgame press conference that despite the miscue on the opening drive, he maintained a positive attitude throughout the rest of the contest.

“All week, the huge thing was … [to] possess the ball, don’t give one away and on the first drive [we] ended up giving one away,” Wingfield said. “But I always preach it, if something goes down, keep your head up [and] stay cool.”

Springfield extended its lead to 10–0 with 8:25 remaining in the first quarter, as Hutra sent his 23-yard field goal opportunity through the uprights. 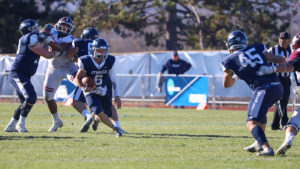 The Bombers responded later in the frame, trimming their deficit to 10–7 against the Pride with 2:46 to go. Williams got the team on the scoreboard by running up the middle for a three-yard touchdown. Senior kicker Nicholas Bahamonde followed this with a successful PAT opportunity.

The Pride got a few points back at the start of the second quarter, as Hutra converted the 29-yard field goal with 14:50 left to give Springfield a 13–7 advantage.

The South Hill squad was stifled with 10:02 to play in the stanza, being held short of the first down on a fourth and one opportunity at Springfield’s 26-yard line. But the college got the ball back on the next play, as senior defensive back Ben Stola recovered a fumble at the 25-yard line.

The Bombers took advantage of this miscue, taking a 14–13 lead with 8:18 left in the second. Leonard-Osbourne ran up the middle and past the goal line for a three-yard touchdown. Bahamonde then tacked on the extra point.

The South Hill squad kept the offense rolling with 5:22 remaining in the quarter, extending its lead to 21–13 over Springfield. Wingfield threw a screen pass to Leonard-Osbourne toward the home sideline, and the running back made an impressive one-handed, juggling grab before sprinting into the end zone for a 49-yard touchdown. Bahamonde followed this by converting the PAT try.

Head coach Michael Toerper said in the press conference that he was impressed by how the group bounced back after facing an early deficit.

“When you throw a pick-six in the first drive of the game, usually a lot of quarterbacks could possibly blink or flinch and go in the shell, but [A.J. Wingfield] stood tall and just kept playing,” Toerper said. “[That’s] certainly not what you want to do against a triple option team, but our guys were certainly resilient and I was very proud that they just stayed the course.”

The Pride attempted to shift momentum back in their favor as the first half was winding down, narrowing the Bombers’ lead to 21–20 with just 36 seconds left. Senior fullback Joseph Cannizzaro hustled past the goal line for a one-yard touchdown, and Hutra sent the extra point through the uprights. The South Hill squad took this one-point lead into halftime. 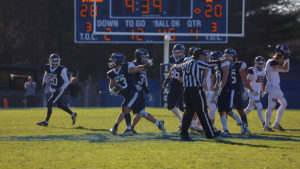 Senior linebacker Matt DeSimpliciis celebrates after recovering a fumble in the fourth quarter. The Bombers would go on to score on that drive, giving them a 31–20 lead that would hold to the end of the game. Aidan Charde/The Ithacan

The defenses of both teams were dominant for the majority of the third quarter, but the Bombers resumed the scoring by bringing back a trick play that it showcased Oct. 1 against Hobart College. Senior wide receiver Billy Tedeschi received a lateral, who then threw the ball down field to Leonard-Osbourne, who ran into the left corner of the end zone for a 46-yard touchdown that gave the South Hill squad a 28–20 lead with 4:30 left in the frame. Bahamonde’s extra point was good.

Leonard-Osbourne said he was confident that he and Tedeschi would be able to pull off the surprise play once again.

“Me and [Tedeschi] are practicing that all the time in practice, it works,” Leonard-Osbourne said. “[We’re] two-for-two and our chemistry is really good.”

The teams then remained off the board until there was 4:22 left in the fourth quarter, as the South Hill squad extended its lead to 31–20 on a 19-yard field goal by Bahamonde.

The Pride attempted to narrow their deficit as the fourth quarter was nearing its close, but the Bombers’ defense was ultimately able to finish off the second-half shutout. Springfield faced fourth and 29 at its own 46-yard line, when junior defensive back Tommy Moran all but sealed the victory by intercepting the pass of sophomore quarterback Chris Keefe with just 1:28 left in the contest. 31–20 would ultimately hold as the final score.

The Bombers will return to action in the quarterfinals of the NCAA Championship Dec. 3, as the team will travel to take on No. 1 North Central College in Naperville, Illinois. Toerper said he is proud of the team’s second round victory and he is looking forward to continuing postseason play next week.

“I want our guys to kind of reflect on this [game] for the next 24 hours before we move on to our next opponent,” Toerper said. “[We’re] one of eight teams still playing right now. So, anybody that we play is going to be really tough and it just happens to be North Central … who has done some great things over the last three years. But our guys are going to enjoy this one, they deserve it.”