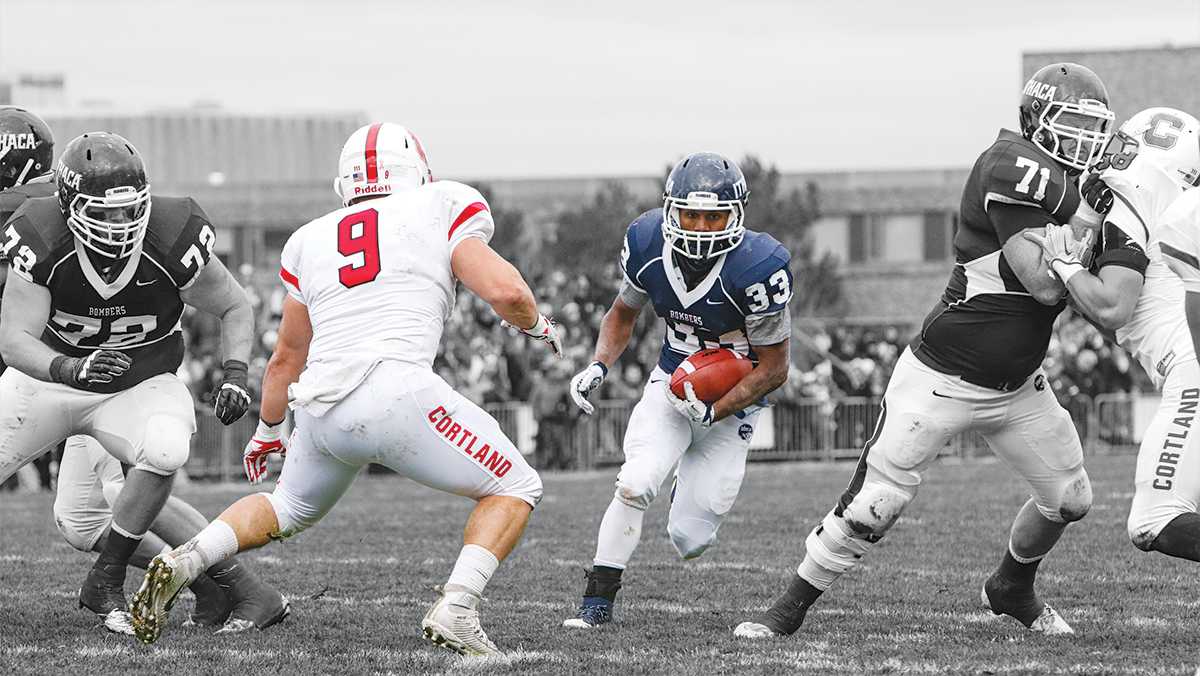 A 41-yard touchdown pass, a botched game-tying field goal that turned into a game-winning touchdown, and a missed 22-yard field goal are the reasons the Ithaca College football team has lost the last three Cortaca Jugs.

Playing in their final game as Bombers, the seniors are looking to bring the Cortaca Jugs to the South Hill for the first time since 2009 and end their collegiate football careers snapping the Blue and Gold’s longest losing streak in the rivalry.

The matchup, which will take place at noon Nov. 12, will also be the final game of head coach Mike Welch’s career. During his 22 years as head coach, Welch is 9–13 in Cortaca Jug games.

Welch said that while securing a victory would be an ideal way to enter retirement, having a game of this magnitude be his final one on the sideline is equally dignified.

“Going out on a win would be fabulous, but I’m just very appreciative and fortunate that I am able to coach Cortaca as my final game,” Welch said.

The Bombers are currently 5–4 overall, while the Red Dragons are 4–5. With both teams mathematically eliminated from playoff contention, Cortland’s head coach, Dan MacNeill, said winning the jug would be a great achievement for either team.

“There are three things that take place around this time of year: Thanksgiving, Christmas and Cortaca,” MacNeill said. “Everybody wants the jugs, and everybody wants to be able to open up that gift on the field.”

This is the 58th Cortaca Jug game, and this year marks the christening of a third jug to tally the wins. The jugs have the final score of every Cortaca matchup since 1959 written on them. The second jug was introduced in 1986 after the original jug ran out of room. MacNeill said a new jug adds another layer to the rivalry.

“It just adds to drama,” MacNeill said. “Our guys are anxious to see it and want to get their hands on it, but they can only do that with a victory.”

Welch said he was unaware that a third jug was being added because the jugs have been in Cortland for so long.

The Blue and Gold will be without junior wide receiver JR Zazzara, who sustained a back injury in the Bombers’ Oct. 29 matchup with St. John Fisher College. Zazzara leads the Bombers with 23 catches for 477 yards and eight touchdowns.

Senior safety Anthony Skretny said he is hoping to win not only for himself but for his teammates who were not able to hoist the jugs.

“Winning would be massive,” Skretny said. “It’s not just for us. It’s for the seniors before us who were never able to win a Cortaca, so it would be great to come out on top this year.”

“We were able to clinch a win in his final game at Butterfield Stadium, and he’s given us and this program his entire life,” Vandenbos said. “He deserves our best efforts and a W this weekend, and that’s what we’re trying to give him.”

Conversely, the Red Dragons’ defensive back and captain, senior Carson Lassiter, who has never lost a Cortaca, said ending his career by losing his final Cortaca would be devastating.

“I’ve talked to a lot of alumni who lost Cortaca their senior year, and they told me about how it still haunts them every day, and I do not want to join that group,” Lassiter said.

Shafer said he expects a competitive game and that Cortland’s 4–5 record does not speak to the skill the Red Dragons have.

“They are a talented football team,” Shafer said. “They’re well-coached, and they play very hard. Their defense is very athletic, and they’ve competed in just about every game they’ve played, so I expect it to be a good one.”