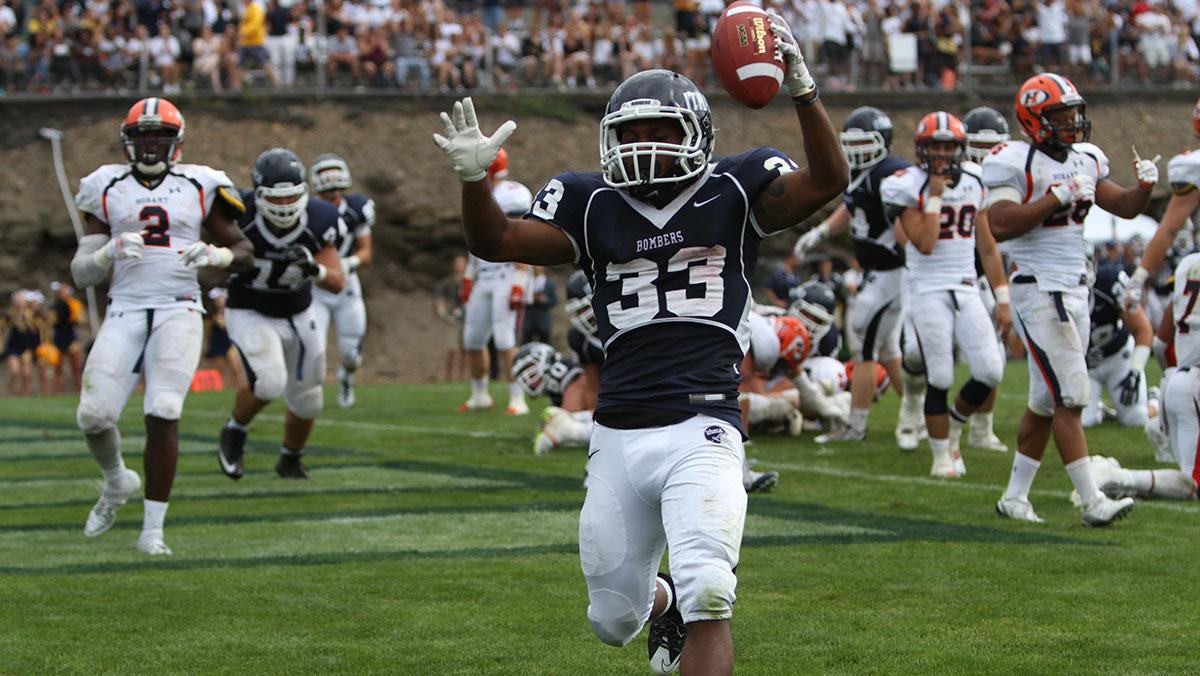 On a wet afternoon at Butterfield Stadium, the Bombers prevailed 24–6 over Hobart College in a non-conference matchup against two top 25 teams.

The No. 16–ranked Statesmen came into the matchup coming off of two consecutive blowout wins to begin the season. The No. 24 Bombers were fresh off of a bye week, and it showed early on.

Turnovers were the key to the game, as both teams started off with multiple miscues to begin the game. The first one came when Hobart sophomore quarterback Thomas Sydeski threw an interception to senior cornerback Ryan Michaels at 11:01.

On the following play, sophomore running back Evan Skea fumbled for the Bombers, only to have Sydeski throw another interception to sophomore defensive back Jordan Schemm.

The third turnover for the Statesmen came just passed the halfway mark through the opening period when Sydeski fumbled the ball and it was recovered by senior captain Logan Murphy in the end zone. This crucial play gave the Bombers an early 7–0 lead.

Murphy said he let his adrenaline and emotions carry him to his second career touchdown.

“For me personally, that was my play,” Murphy said. “I just love the fact that when Hobart was about to get the ball over, we put on the hard-hats and went to work.”

The second quarter was much of the same with sloppy plays by both teams. However, the Bombers’ senior specialist Josh Oliver, the second-leading returner in the nation, busted out for a 60-yard return to give the Blue and Gold field position inside of the 20-yard line.

Senior kicker Max Rottenecker finished the drive with a 33-yard field goal to extend the lead for the Bombers to 10–0.

The fourth and final turnover in the first half for the Statesmen came when junior starting quarterback Wolfgang Shafer connected to junior wide receiver Brian Balsamo, gaining 25 yards and putting the Bombers in prime position to score.

A couple of plays later, Shafer converted to Oliver for the first offensive touchdown of the day with two minutes remaining in the opening half to send the squad into halftime with a 17–0 lead.

Head coach Mike Welch said although the offense struggled due to the weather, the turnovers loomed large for the Bombers.

“They put together a really good game plan, we just had to hang in there and we hit some big plays,” Welch said. “That’s the thing, when you get a big play, it changes the field position.”

Coming out of the tunnel, Hobart started its opening series with senior Parker Thelander taking over the helm at quarterback for Sydeski.

Thelander connected on his first two passes to lead the Statesmen down the field before failing to convert within Bomber territory.

This was the Statesmen’s first blocked punt on the young season as they are notoriously known for blocking punts. They’ve had six in each of the past two seasons.

This led to a 16-yard touchdown run by Hobart freshman running back Tynard Barfield. However, the place kicker for Hobart, junior Sean Kirshe, missed the extra point as the Bombers led 17–6 at the end of the third quarter.

In the fourth quarter, the ball was controlled primarily by the Bombers. Shafer threw a 53-yard bomb to senior wide receiver Kyle Hastings for the longest pass of the game on both sides.

Welch said he was proud of the way the defense played despite the mistakes on both ends of the field.

“They just never let up,” Welch said. “They made plays when they had opportunities. When they had the interceptions, when there was a fumble, they recovered. That’s a sign of a focused group and they played hard.”

It was the second win of the season for the South Hill squad and the 14th consecutive home win against the Statesmen.

The Bombers will return to the gridiron at 1 p.m. Sept. 26 for a matchup against the undefeated Alfred University at Butterfield Stadium.

Murphy said the team and coaches will take the week to prepare for the game against the Saxons.

“I think that we will be well-prepared. It’s just a matter of getting in the film room and study up on them and get ready during the week,” Murphy said.