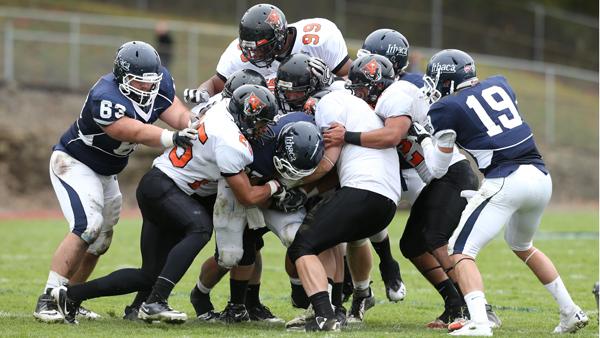 Durst Breneiser/The Ithacan
Senior running back Jarrett Naiden, center, is bottled up by member of the Buffalo State defense during the Bengals' 21-14 win against the Bombers on Saturday at Butterfield Stadium.
By Christian Araos — Staff Writer
Published: October 14, 2012

The football team was thrown a life preserver Saturday but never grabbed it.

The Bombers scored only once in the fourth quarter, despite an average starting spot at the Buffalo State 41-yard line, eventually losing 21-14 at Butterfield Stadium.

The Blue and Gold (4–2 overall, 2–2 Empire 8) scored on their first possession in the fourth quarter when junior quarterback Phil Neumann found junior tight end Steve DelMoro on a roll out pass for a 10-yard touchdown to cut the Bengals’ (3–4 overall, 1–3 Empire 8) lead to seven with 10:14 left.

The defense recorded two takeaways in the second half for the Bombers, but the South Hill squad’s offense was unable to score after each turnover. Junior free safety Skylar Griffenberg said the team’s performance did not show what it was capable of.

“We didn’t get stops on defense, and the offense didn’t capitalize when we did,” Griffenberg said.

The Bombers only scored once in the second half, despite starting their drives at no worse a position than at their own 30-yard line. Neumann threw two interceptions deep in the Bengals’ territory, and senior running back Jarret Naiden said the offense was deflated after those turnovers. Naiden and fellow running back Clay Ardoin were held in check as the Bombers totalled 98 yards rushing. In the first half, the Blue and Gold were held to only 27 rushing yards and 126 total yards.
Head Coach Mike Welch said he did not make any offensive changes at halftime despite the low output.

“We didn’t make too many adjustments with it,” Welch said. “We just did a better job with it. They were doubling Joe [Ingrao] and taking a guy out of the box to do that, and we decided to run where they were taking the guy out.”

The win is the Bengals’ first ever in Empire 8 Conference play, and it is the first time they have beaten Ithaca since 1999. Buffalo State Head Coach Jerry Boyes ’76, said his defense’s resilience was vital.

“We stood tall when we needed to,” Boyes said. “We have had some very good games with that, and some games we weren’t.”

The loss leaves the Bombers two games behind the Salisbury University Sea Gulls (5–1 overall, 3–0 Empire 8) in the Empire 8 with three conference games remaining. Despite the desperate situation, Griffenberg said the Bombers are confident they can be the best in the conference.

“We’re still in it,” Griffenberg said. “There’s no doubt about it, the E8 is a tough conference, but we know we’re in the top tier in this league. We know we can be the best team in this league.”

Both of Phil Neumann’s two picks were not his fault. His first pass was deflected by senior linebacker Pasquale Vacchio and intercepted by sophomore cornerback Mike Burton, who ran it back to the Bombers’ 15-yard line, leading to a field goal. The second pick came as Neumann’s hand was hit on the follow-through, and the wobbly pass fell right into the hands of senior cornerback Kam Johnson, who was on the ground. Nonetheless, turnovers in the opponents’ territory will lead to losses.

The Bombers lost seven and eight yards on the first plays of their final two drives, respectively, with some bizarre circumstances. After sophomore cornerback Sam Carney ran a punt back to the Bengals 35, the Bombers heard a whistle on the first play and stopped playing, resulting in Clay Ardoin being tackled for a seven yard loss, killing the drive before it started. On the next drive, the Bombers tried an end-around to freshman wide receiver Josh Oliver that was blown up for an eight-yard loss, wasting precious time late in the game.

The Bengals offense provided variety in ways that kept the Bomber defense guessing. The shotgun spread, pistol and triple option were used equally with 29 passes and 29 runs. Four receivers each caught two passes, and two running backs each had 10 carries for Buffalo State.

For the first time since 2008, 17th-ranked St. John Fisher lost two straight games. The Cardinals (4–2 overall, 1–2 Empire 8) lost to Alfred University (4–1 overall, 3–0 Empire 8) 26-13 at home Saturday. Fisher committed five turnovers and rushed for only 45 yards in the game. They will host the Bombers next Saturday at 4 p.m. in Rochester, N.Y. The Saxons remain undefeated in the conference and will travel to ninth-ranked Salisbury, who defeated Hartwick College 37-7 at home.