Football bounces back with 47–19 victory over Hartwick Hawks 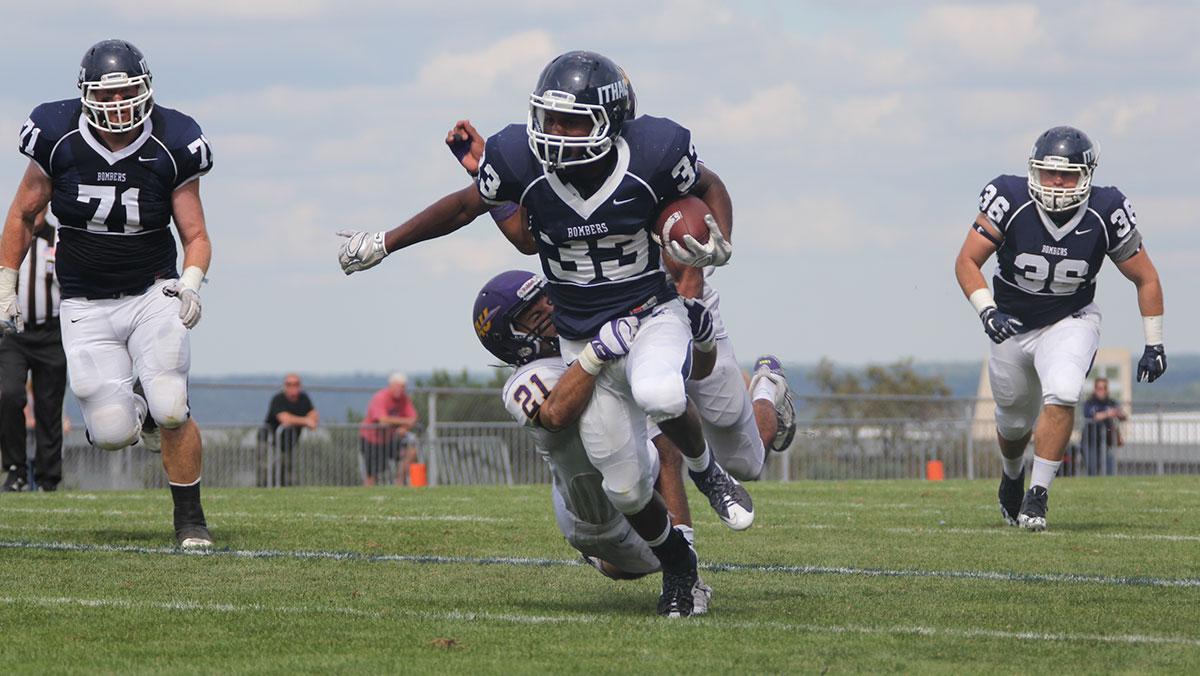 The football team rebounded from its first loss of the 2015 season by defeating Hartwick College 47–19 on Oct. 10 at Wright Stadium in Oneonta, New York.

Leading up to the game, the Bombers offense has struggled to bust out of the gates early in each of its first four games of the season, as they have only scored 14 total points in the first quarter of each of those games.

That trend continued as the Bombers got off to a shaky start when the first snap of the game for the college’s offense sailed over junior quarterback Wolfgang Shafer’s head and into the back of the endzone, where sophomore running back Tristan Brown recovered the rock for a safety.

After receiving the safety punt, the Hawks proceeded by driving down the field, and scoring on a five-yard touchdown run by Hartwick senior quarterback John Garcia.

However, the Blue and Gold would respond on the next play. Sophomore defensive back Jordan Schemm returned the ensuing kickoff 90-yards for a touchdown, cutting the Hawks lead to 9–7.

After senior specialist Josh Oliver fumbled the football on a punt return, where the Hawks special team recovered the ball on the Ithaca 37 yard line, Hartwick converted a 28-yard field goal to extend its lead to 12–7.

The Bombers matched the Hawks’ field goal with a 42-yard field goal of their own to open up the second quarter and once again pull them within two points of the lead, 12–10.

The following drive, senior defensive back Malik Morris intercepted Garcia’s pass and returned it into Hartwick’s territory. It was Morris’ third interception on the season.

Two plays later, Shafer connected with senior tight end Kyle Hastings for a 21-yard touchdown strike to give the Bombers their first lead on the afternoon, 17–12.

The South Hill squad would tally another score on its next possession when sophomore running back Dan Porter scampered into the endzone from 1 yard out to expanded the Bombers’ lead to 24–12 heading into halftime.

Senior captain and defensive lineman Logan Murphy led the charge with a career-high 4.5 sacks in the game while preventing the Hawks from establishing a consistent offensive rhythm.The Bombers defense dropped Garcia a heaping total of nine sacks.

The success for the Blue and Gold continued in the second half when Shafer opened up the third quarter with a goal line touchdown to sophomore fullback Jack Yule for a 32–12 lead over the Hawks.

The next play, however, Garcia completed a pass to senior wide receiver Tanner Williams who streaked down the sideline 66 yards for a touchdown to cut the Bombers lead to 32–19.

Williams had a magnanimous performance, catching 11 passes for 255 yards and that touchdown reception.

The South Hill squad’s offense would respond with Brown running untouched into the endzone for a 5-yard touchdown for a 37–19 lead. Senior kicker Max Rottenecker would miss the extra point.

Even though Hartwick’s run defense ranked last in the Empire 8 in terms of yards per game, the Bomber offense found the majority of its success in the air against the Hawks.

Shafer said the offensive line, who served up eight sacks against Utica College last weekend, assured him before the game that they would improve from previous weeks.

“They told me before the game, ‘Hey Wolf, we got your back all day,’” Shafer said. “And that’s exactly what they did. I’m proud of them, and I love those guys. They did a hell of a job. I think it really goes towards their pride of playing that position so well.”

The Bombers offensive line only served up one sack to the defensive unit of the Hawks this time around.

The offensive prowess by the Bombers continued when Hastings caught his second touchdown from Shafer to increase the Bombers lead over the Hawks to 44–19 at the beginning of the fourth quarter.

Rottenecker would later notched his second field goal attempt from 22 yards out to give the Bombers a 47–19 lead.

The Hawks were held to one score in the second half. Garcia finished with a statline of 20–40 passes completed for 320 yards, one touchdown pass and two interceptions.

Morris said the secondary did a great job of minimizing the big play in the pass game.

“They definitely threw it a lot,” Morris said. “We did give up a couple big plays, with them throwing the ball and taking that many shots, I think we did a good job of controlling them overall. We only gave up 19 points. We would like to give up a little less than that, but we got the victory.”

The Bombers’ next matchup will be home against SUNY Brockport at 1 p.m. Oct. 17 at Butterfield Stadium, as the college celebrates Community Appreciation Day.