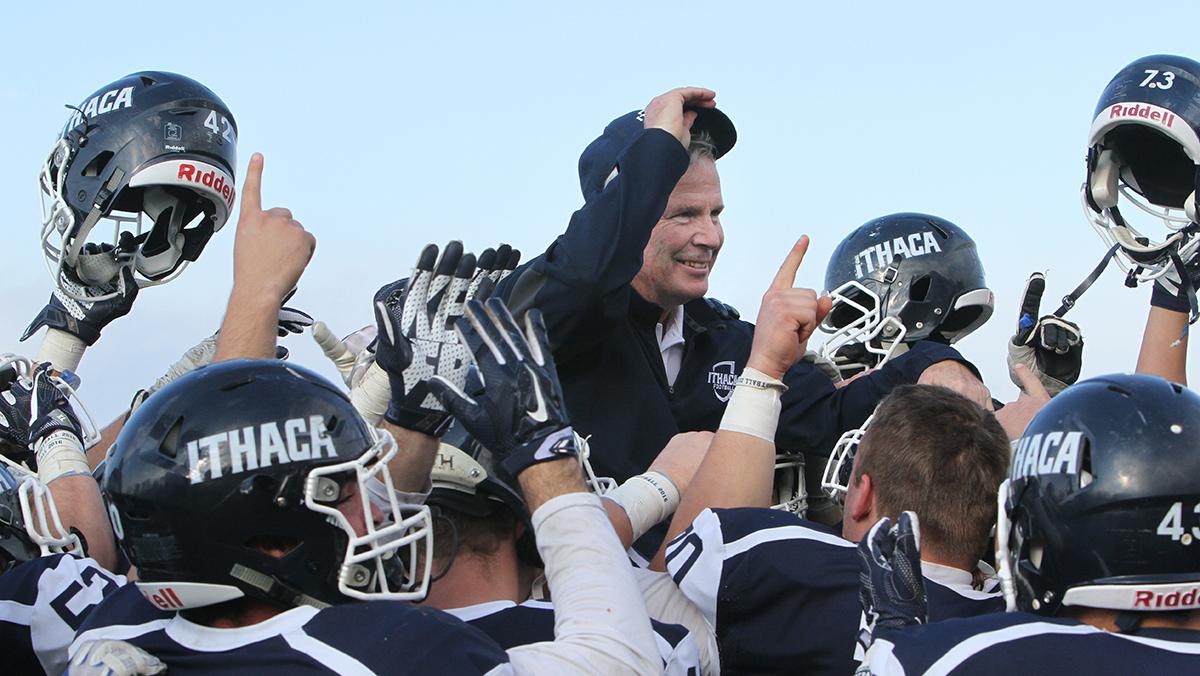 SEAN DULLEA/THE ITHACAN
The Ithaca College football team carries head coach Mike Welch off of the field after its 7–0 win over Buffalo State on Nov. 5. This was Welch's final home game of his career.
By Matt Hornick — Staff Writer
Published: November 5, 2016

The Ithaca College football team defeated Buffalo State 7–0 Nov. 5 at Butterfield Stadium. The Bombers are now 5–4 on the year and finish their home schedule undefeated.

This was the final home game of head coach Mike Welch’s career, as he will retire at the conclusion of this season. He was honored at halftime with his family by President Tom Rochon and Susan Bassett, director of Intercollegiate Athletics.

Welch said he was moved by the gesture but tried to remain focused on the game at hand.

“It was really emotional,” Welch said. “I tried to stay within it and coach the game as best I could, but it was difficult with the significance of this game.”

Senior defensive lineman Rob Barbieri, who also played in his last game at Butterfield Stadium, said they wanted to win this game to honor Welch.

“Winning this game means the world, Barbieri said. “He’s done so much for this community, this program and for college football that this is what he deserves.”

Both teams punted on their opening drives. After forcing the Bengals to punt on their second drive, junior defensive back Jordan Schemm returned the punt for 51 yards to the Bengals 12-yard line. The Bombers found the end zone three plays later, when senior quarterback Wolfgang Shafer connected with freshman wide receiver Will Gladney for an eight-yard touchdown, the only score of the game.

Neither team were able to put points on the board for the remainder of the game. In the third quarter, the Blue and Gold had a first and goal on their own five yard line and failed to find the end zone and set up a 19 yard field goal attempt for freshman DJ Ellis, which was blocked.

Despite winning, the Bombers were only able to score seven points in this game and were without starting junior wide receiver JR Zazzara, who is recovering from a back injury. Welch said the team adjusted well, but his absence was noticeable.

“He is a dynamic player and was a tremendous part of our offense, so we had to make some adjustments,” Welch said. “I thought we did some good things but certainly he’s someone that provides some explosive plays for us, and we’re going to have to improve in the red zone without him.”

This was the Bombers second shutout of the year, and the first time they have had two shutouts in the same season since 2004.

Buffalo State head coach Jerry Boyes said the Bombers did a great job game planning for the Bengals running game, which was averaging over 175 yards per game.

“We have been very strong with our run game this season, but Ithaca seemed to bottle us up, and we couldn’t get it done,” Boyes said. “We didn’t make plays on the offensive side and we’ve been in the good fortune of making plays but it didn’t happen today.”

The Bombers will finish their season at noon Nov. 12 when they travel to Cortland for the 58th annual Cortaca Jug game.

Shafer, who will be playing the final game of his career, said he is ready to play for the jug next week.

“We have to keep a level head during this week, but we’re ready to hit them in the mouth,” Shafer said. “We can’t wait.”