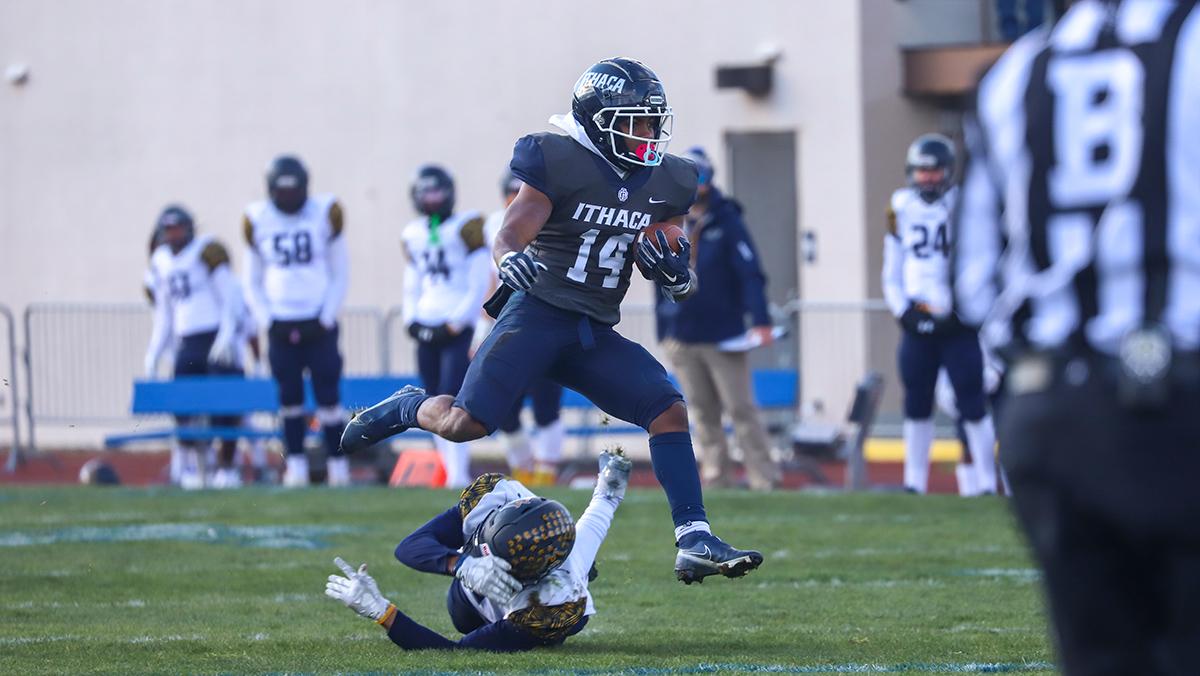 The No. 9/10 Ithaca College football team defeated the University of Massachusetts Dartmouth 63–20 in the first round of the NCAA Championship Nov. 19 at Butterfield Stadium. The victory advances the Bombers to the second round of the postseason and improves their overall record to 11–0.

The Bombers’ offense posted one of its most dominant efforts of the season, recording its highest point total on 365 rushing yards and 175 passing yards. Junior running back Jake Williams was a key contributor, leading the team with three touchdowns and ranking third on the squad with 80 rushing yards. Senior quarterback Max Perry also recorded a pair of touchdowns.

Williams said he has been impressed by the team’s performance in recent weeks, including its collective effort in the first round victory.

“[The coaches have] been giving us the game plan and we’ve been executing right,” Williams said. “[Senior quarterback A.J. Wingfield] has been slinging the ball well, our receivers have been blocking well [and] catching the ball well. I think it’s just been like an all-team contribution.”

The Bombers took advantage of the three fumbles by the Corsairs on their first three drives of the game, taking a 21–0 lead just 7:25 into the first quarter. Williams was the catalyst for the Bombers’ early offensive surge, scoring each of the team’s first three touchdowns.

Wingfield completed a screen pass to Williams, who ran 11 yards into the left corner of the endzone to open the scoring. Williams then further extended the college’s lead with two one-yard touchdown rushes up the middle. Senior kicker Nicholas Bahamonde sent all three extra point attempts through the uprights. Head coach Michael Toerper said he was pleased that the team capitalized on the turnovers by making three trips to the end zone.

The South Hill squad continued its offensive productivity at the start of the second quarter, advancing its lead to 28–0 against UMass Dartmouth. The college showcased an unconventional play with 12:00 remaining in the frame, as Roumes aided the offense by throwing a 21-yard touchdown over the middle to Koumas. Bahamonde’s PAT was successful.

The Bombers found the end zone two more times before the end of the quarter, taking a 42–0 lead over the Corsairs into halftime. Junior running back Jalen Leonard-Osbourne ran into the left corner of the end zone for a 35-yard touchdown rush with 4:53 to play. Senior quarterback Conner Hayes then rushed up the middle for a five-yard score with just 1:55 to go. Both of Bahamonde’s extra point tries were good.

The offenses of both teams were rather quiet through the majority of the third quarter, as the scoring didn’t resume until there was 2:57 remaining in the frame. UMass Dartmouth got on the scoreboard with a 16-yard touchdown pass from junior quarterback Dante Aviles-Santos to senior running back Luis Gonzalez, making it a 42–6 game in favor of the South Hill squad. The PAT attempt by sophomore kicker Braedyn DeMarco was unsuccessful.

The Bombers responded on the first play of the fourth quarter, extending their lead to 49–6 against the Corsairs with 14:50 left. Perry hustled 33 yards to the middle of the end zone for a touchdown. Bahamonde then converted the PAT.

UMass Dartmouth got these points back with 5:14 left in the frame, narrowing the South Hill squad’s lead to 49–13. Gonzalez rushed up the middle for a 9-yard touchdown, followed by DeMarco tacking on an extra point.

The Bombers answered with 4:59 to play, making it a 56–13 game on a screen pass from Perry to senior wide receiver Anthony D’Adetta that resulted in a 60-yard touchdown. Bahamonde’s PAT attempt was successful.

The South Hill squad capped off the scoring with a 21-yard touchdown rush by Perry. Bahamonde converted another PAT to extend the team’s lead to 63–20. This would hold as the final score, as neither team would score during the final 2:01.

The Bombers will return to action against the Springfield College Pride at noon Nov. 26 at Butterfield Stadium in the second round of the NCAA Championship. Toerper said he feels the team will be prepared to take on the Pride next week, a program the college hasn’t faced since Oct. 15, 2011.

“We’ve done a nice job all year long of adjusting our scheme based on who we’re playing and adjusting our personnel accordingly as well, and I think this week is no different,” Toerper said. “[Springfield College is] a really tough team, we know that. But, we’re going to make sure we start off tomorrow by just getting lined up and getting our eyes in the right place.”