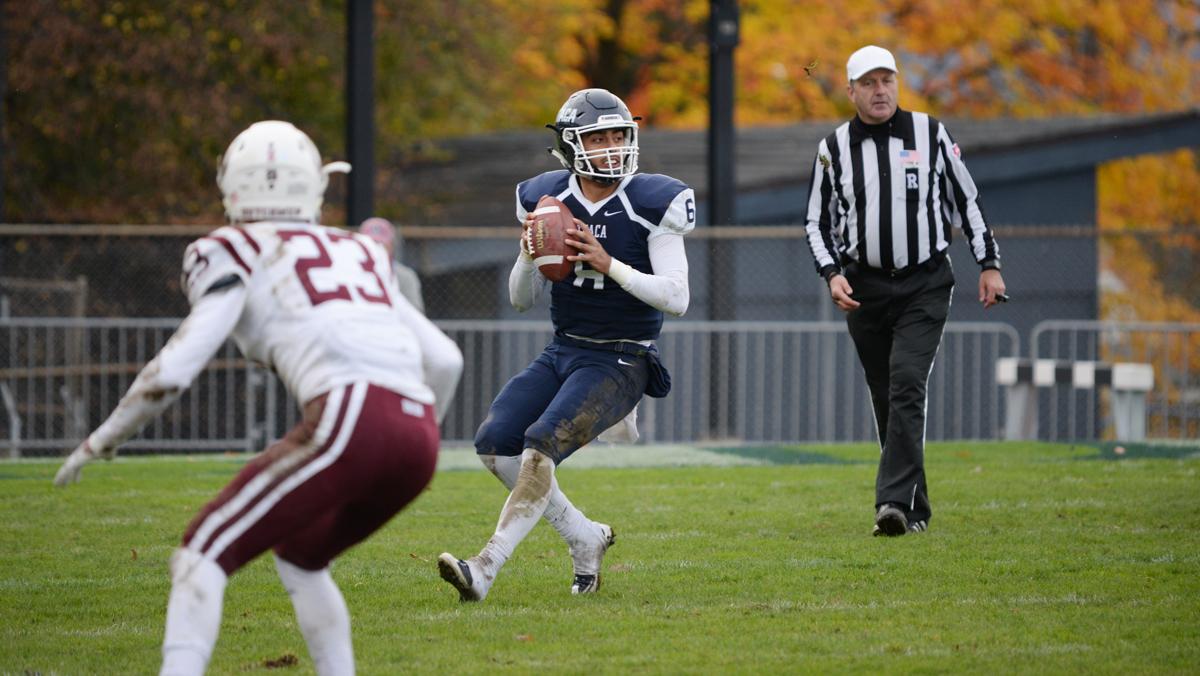 SAM FULLER/THE ITHACAN
Freshman quarterback Wahid Nabi drops back from the snap and looks for an open receiver during the Bombers' game against Union College Nov. 4. The Bombers defeated the Dutchmen 20–3 at home.
By Matt Hornick — Senior Writer
Published: November 5, 2017

The Bombers’ offense struggled to put points on the board in the first half as the teams went into their locker rooms at halftime tied at three. Head coach Dan Swanstrom said moving the ball was not his team’s problem, they were just unable to find the end zone.

“We value productive drives where you get three or four first downs and we accomplished that every single time [in the first half],” Swanstrom said. “However you want to finish drives and put points on the board, and we were unable to do that.”

The Blue and Gold eliminated that problem with a 17–point second half. The second–half scoring was kicked off with a 33-yard field goal from sophomore kicker David Prudhomme. This scoring opportunity was set up by a 52-yard pass from freshman quarterback Wahid Nabi to freshman wide receiver Andrew Vito.

Nabi said he and his teammates executed that play very well and Vito’s speed allows plays like that to happen.

“The point of that play is to draw the safety in, and not many guys can keep up with Vito, and I just let it go,” Nabi said. “I got scared for a second because I thought I overthrew it; then I remembered that Vito is the fastest person I’ve ever seen, and he got to the ball.”

The Bombers broke the game open in the fourth quarter, starting with an interception by junior defensive back Aaron Francis and two fumble recoveries. Francis said the interception was a product of being well prepared for Union’s offense.

“We knew they were going to test us deep this week,” Francis said. “We were making a lot of interceptions in practice, and it showed on the field.”

The South Hill squad found the end zone for the first time after one of the fumble recoveries when senior running back Tristan Brown punched in a touchdown from one yard out.

Sophomore running back Isaiah D’Haiti scored for the Bombers on the next possession on an 11-yard run to seal the game, another drive that started with a fumble recovery.

Swanstrom said much of his team’s rushing success is due to the offensive line.

“They run tough,” Swanstrom said. “It goes to the guys up front who create space for them. They played hard, they played tough.”

The Bombers will return to action at noon Nov. 11 at Butterfield Stadium to host the 59th Cortaca Jug against SUNY Cortland.

Football shuts out Utica College 14–0 on the road