Football falls to the defense of No. 5 Brockport 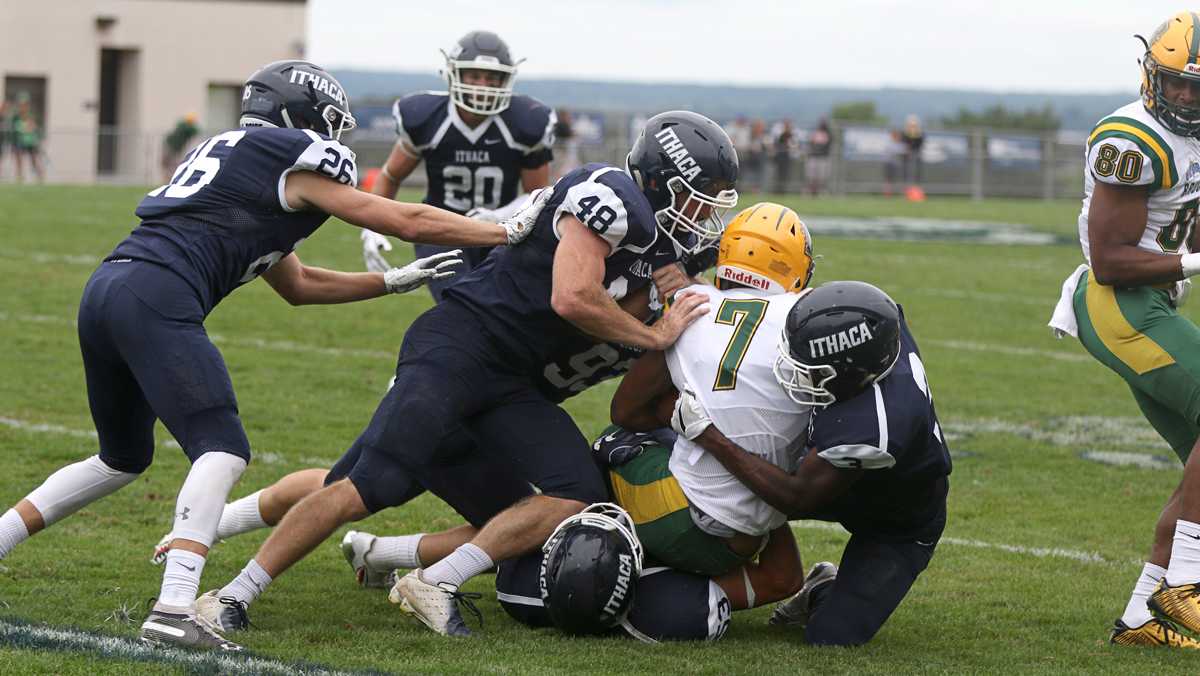 In what was anticipated to be one of the biggest tests of the young season for the Ithaca College football team, the might and power of No. 5 The College at Brockport proved to be too much for the Bombers.

The Golden Eagles defeated the Bombers 13–7 Sept. 8 at Butterfield Stadium. Despite the loss there were positives for the Bombers.

“It stings that we lost a game,” defensive coordinator Mike Toerper said. “At the end of the day our job is to score more points than them, and unfortunately they scored more points than us. I’m very proud of our effort. I think we did a great job making them uncomfortable, and that was the plan. We executed almost perfectly, but it wasn’t enough today.”

The defense was able to hold the Golden Eagles, who a week ago scored 57 points and had 583 yards on offense, to just 13 points. They gave up 10 of those points on the last two drives of the second quarter and the last three on a field goal in the third quarter.

The Bombers got their only touchdown of the game — a pass from senior quarterback Peter Palczewski to sophomore wide receiver Andrew Vito late in the fourth quarter — but there wasn’t enough time on the clock for another offensive drive.

“We just had some hiccups out there,” Vito said. “We just didn’t execute the way we wanted to. We kept fighting, that’s definitely a positive … They are a really good team and it showed.”

The offense as a whole struggled to produce and take advantage of opportunities. Sophomore starting quarterback Wahid Nabi was shaken up late in the third quarter, with Palczewski coming in to replace him. In just over a quarter, Palczewski threw 6–12 for 77 yards, while Nabi threw 12–30 for 57 yards. The Bombers only had 49 rushing yards, with 32 of those coming from Nabi.

Vito, who had more pressure on him with the absence of junior wide receiver Will Gladney due to injury, led the receivers with eight catches for 84 yards.

The defense is what kept the Bombers in the game, as they held Brockport junior quarterback Joe Germinerio to just 170 yards. Senior linebacker Ryan Bronson led the team with 14 tackles, followed by senior strong safety Pat Minogue with 13 tackles and one forced fumble.

The Bombers will return to action next weekend, when they travel to face Alfred University at 1 p.m. Sept. 15 in Alfred, New York.