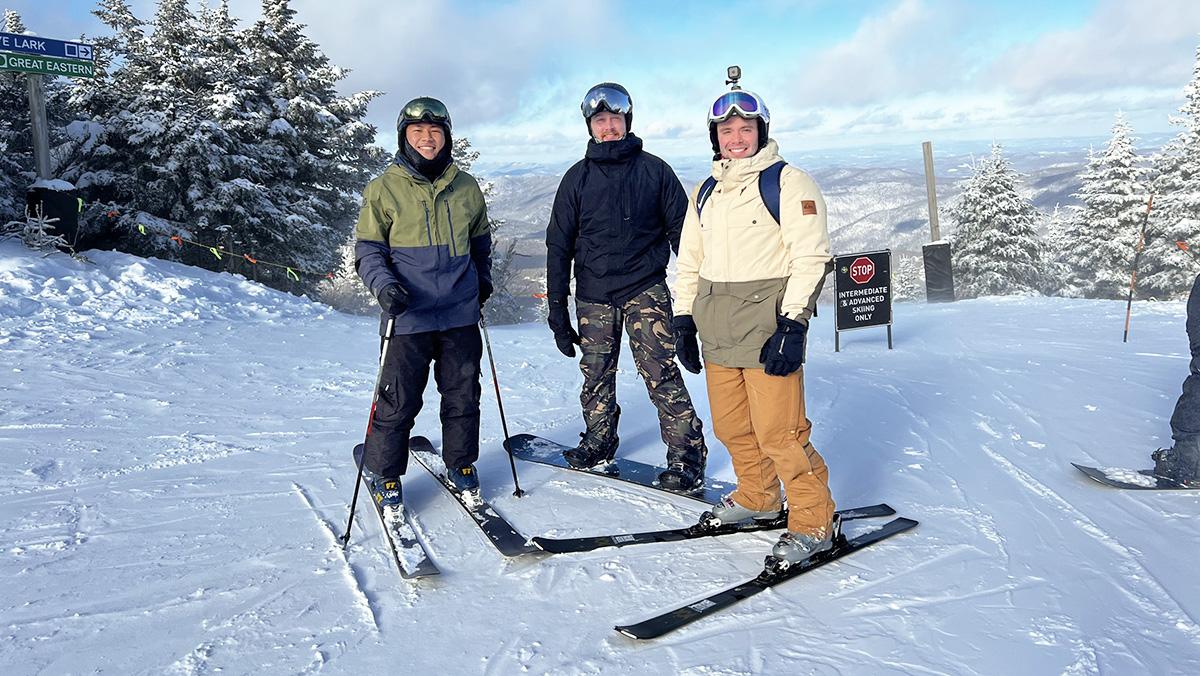 As snow continues to fall this winter, many members of the Ithaca College community are hitting the slopes to go skiing and snowboarding. Junior football kicker Nick Bahamonde has made an effort to bring these students together by starting the “Snow Club.”

The group is not an affiliated club with the college and started as a way to connect students who have a passion for these winter sports. The club began operation this winter and has already gained a rather large following, with about 50 people in its GroupMe chat and around 60 people on the email list. Senior Grace Ziehnert, field hockey midfielder, said the group does not practice or compete but meets up to ski and snowboard when members have the opportunity.

“It is just a group of kids that like to snowboard or ski and can get together on college night to go to Greek Peak or take trips on the weekend to go skiing,” Ziehnert said. “[It is] a fun environment for people that like to do the same things to hang out and meet each other.”

The club traditionally attends “college night” at Greek Peak Mountain Resort in Cortland each Wednesday. The resort’s weekly promotion provides students with a $19 Night Lift Ticket if the ticket is purchased online and participants have a valid college ID, according to its website.

The group also took a trip to Killington Mountain in Vermont from Feb. 4 to 6, a weekend in which Bahamonde said the mountain got 17 inches of snow. Snow also piled up on South Hill during this time, prompting the college to transition to remote instruction Feb. 3 and 4.

Bahamonde said 10 members of the club went on the trip and rented an Airbnb near the mountain. The club initially had plans to go to Mount Snow in Vermont that weekend but switched locations when it learned Killington’s snowfall would provide a better experience.

“Last minute, we switched our passes and went there and we drove up on Friday through the snow,” Ziehnert said. “So it took people a long time to get there, but it was so worth it. We stayed over Friday night [and] went skiing all day on Saturday. … It was awesome.”

The Snow Club has also found ways to participate on the college’s campus, occasionally skiing down the hill next to Boothroyd Hall. Members will also send messages in the group chat asking others to join if they decide to go skiing or snowboarding throughout the week.

Junior Kiley Mabus helped start the club with Bahamonde and said their primary goal is to provide an enjoyable and inclusive atmosphere for those that participate in winter sports.

“Snow Club is about creating a fun community with like-minded people who just enjoy skiing or snowboarding,” Mabus said. “Basically, we made it so people can meet new people that are like-minded.”

Bahamonde said he was initially inspired to start the club because his friends are members of the Snow Club at Virginia Tech University, which he said has around 500 members. Bahamonde said he would consider making it an official club if the group was still able to maintain its relaxed environment. He said by not being an affiliated club, the group can manage its own activities, which he said the group believes is more efficient. He also noted that currently, the club is simply just a group of people who go skiing and snowboarding with each other and he would rather have the group become a student organization than a club sport, if anything.

“I try to keep it really loose and kind of self-governing because it only exists for people to have fun and meet other people,” Bahamonde said. “I just want people to have fun with it and you can make out of it whatever [you] want.”

While this group is not an official club, the college does offer students the opportunity to ski competitively through the Ithaca College Ski Racing Club. This affiliated club has both a men’s and women’s team and competes in five meets each winter. Senior Sophie Lester, club president, said both of the teams in the club have qualified for this winter’s regional competition.

Lester said that other colleges the teams compete against have groups that are similar to Snow Club, and she would be interested in working with the new group on campus.

“We are happy that there is more interest on the Ithaca [College] campus for skiing and snowboarding,” Lester said via email. “We would definitely like to combine or work with the other club so we can expand. We can offer the club deals with season passes and have a long relationship with the school. Hopefully, if we ski at Greek Peak next year, we would be able to work together. Many other teams that we compete against have similar programs.”

Bahamonde said moving forward, he wants the club to continue gaining members and grow the culture of skiing and snowboarding on South Hill. He also said he wants to plan more trips for the group including a potential outing to Montana during next year’s break between the fall and spring semesters.

“I think this is like the perfect club for Ithaca [College],” Bahamonde said. “I want to pass it down and keep going and be here for hopefully long after [I graduate].”