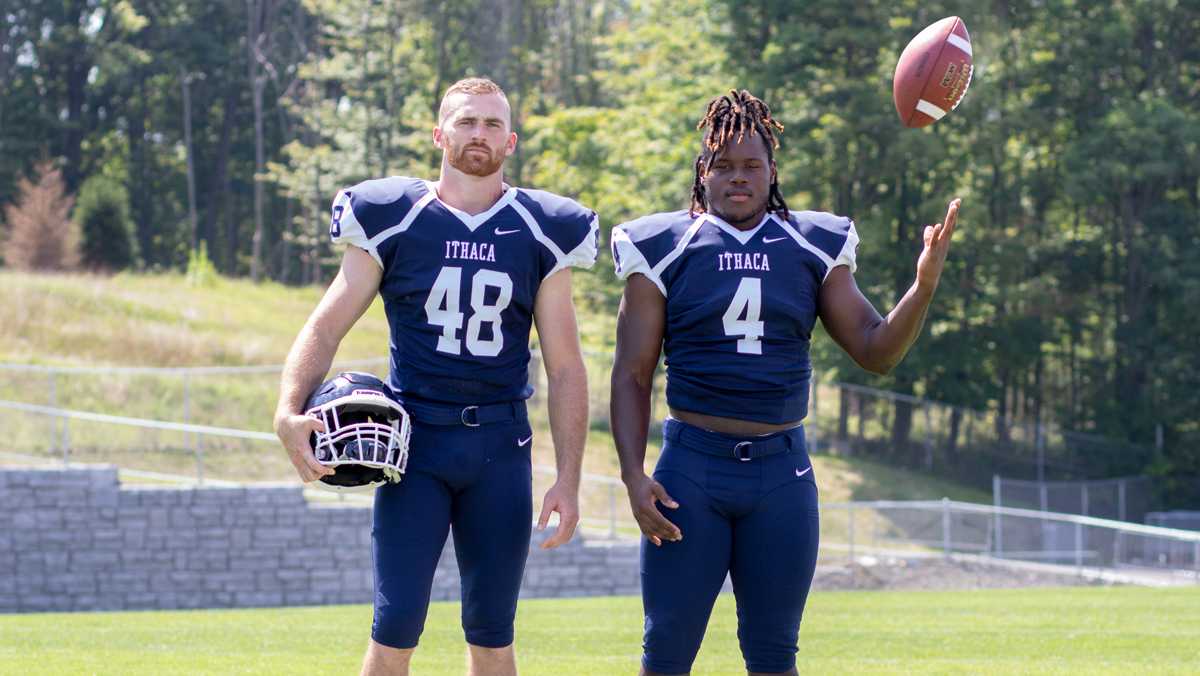 Every day of preseason training begins at 7 a.m. for the Ithaca College football team.

After a team breakfast, the players are off to general meetings before they split into offense and defense breakout sessions, followed by special team meetings. There’s then a 2 1/2-hour practice, lunch, afternoon walk-through, more rejuvenation periods, lifts and meetings.

Training typically doesn’t end until 9 p.m. It’s a long day full of intense practices and new information, but no matter how difficult the practices or how long the days are, everything will still be easier than last season.

That’s because much of last year’s preseason was spent adjusting to a brand new coaching staff that brought with it a new playbook and an intense quarterback competition that lasted until the fourth week of the season. Mike Welch ’73 retired at the end of the 2017 season after 23 years as head coach.

Head coach Dan Swanstrom is now entering his second year at the helm of the program, and the rest of the coaching staff is the same except for minor tweaks. Swanstrom led the team to an 8–3 record in his first season — he brought home the Cortaca Jug for the first time in seven years and a postseason win in the Scotty Whitelaw Bowl.

It was the first winning season since 2014 and the first postseason victory since 2013. It signaled what many hoped would be a rejuvenation of the storied program that consistently made the NCAA tournament in the 1980s, ’90s and early 2000s before falling off track. An NCAA appearance became a rarity after, instead of the normal result.

At the center of that hope is sophomore quarterback Wahid Nabi, who, after struggling with consistency early in the season, went on to break two program records and threw 2,552 yards in his freshman campaign.

“He’s had a nice camp so far,” Swanstrom said. “A couple boneheaded things so far that I want him to clean up but a lot more positives than negatives.”

Lining up next to him this year will be junior Will Gladney, who was named a first-team preseason All-American by d3football.com. He had 1,042 receiving yards last year and seven touchdowns.

With his spot as a starter all but secured, the rest of the wide receiving corps is fighting for the remaining slots. The Bombers need to fill the void left behind by Jared Bauer, JR Zazzara and Jack Yule, all of whom graduated in 2018. Gladney and sophomore Andrew Vito are the only top-five receivers remaining from last year’s team.

“We’re just in a place where it’s still early, and we have some open competition,” Swanstrom said. “A couple of those places, there have been some front–runners. … Wide receiver is pretty open. It’s day-to-day — someone is always jumping up. Offensive line has been musical chairs.”

Juniors Isaiah D’Haiti, Kendall Anderson and Nick Cervone are set to be the top three running backs for the Bombers, a spot people are used to seeing Tristan Brown ’18 fill all by himself. Brown rushed for over 2,500 yards during his career.

“I’ve been helping out the younger players, trying to help them through,” D’Haiti said. “I know it’s a fast offense, Coach Swanstrom is all about tempo and controlling the game. I’ve just been taking the leadership role and trying to be that guy.”

On defense, Swanstrom said junior Nick Garone and senior Brian Gill have been fitting in nicely as linebackers, a big role to fill with the departure of Jordan Schemm, Kenny Bradley and Dan Loizos.

Minogue said even with the open competitions, the team has come a long way from where they started.

“We definitely improved a lot from the spring,” Minogue said. “Looking back to last camp, we definitely took a drastic step in the right direction, so I’m really excited about that.”

The offense has been especially focused on increasing its production in the red zone as it struggled to score once it made it past the 20-yard mark for the first half of the season.

The Bombers will begin their season with back-to-back home games against Saint Vincent College and No. 6 The College at Brockport, a tough, early challenge. Other big games include a Sept. 15 matchup against Alfred University and an Oct. 6 home game against Rensselaer Polytechnic Institute. As always, they will conclude the season against SUNY Cortland. This year will mark the 60th Cortaca Jug and the game will be played at Cortland.

Swanstrom said the goal of the team is to go 1–0 each week, but there are three things the team looks at every year: winning the league, winning Cortaca and making it the postseason.

“If you look at the big picture, I think if we handle those three things, the program will be where I want it to be,” he said.

The Ithaca College football team was questioned if they were going to perform well, but a successful season proves they have a bright future.