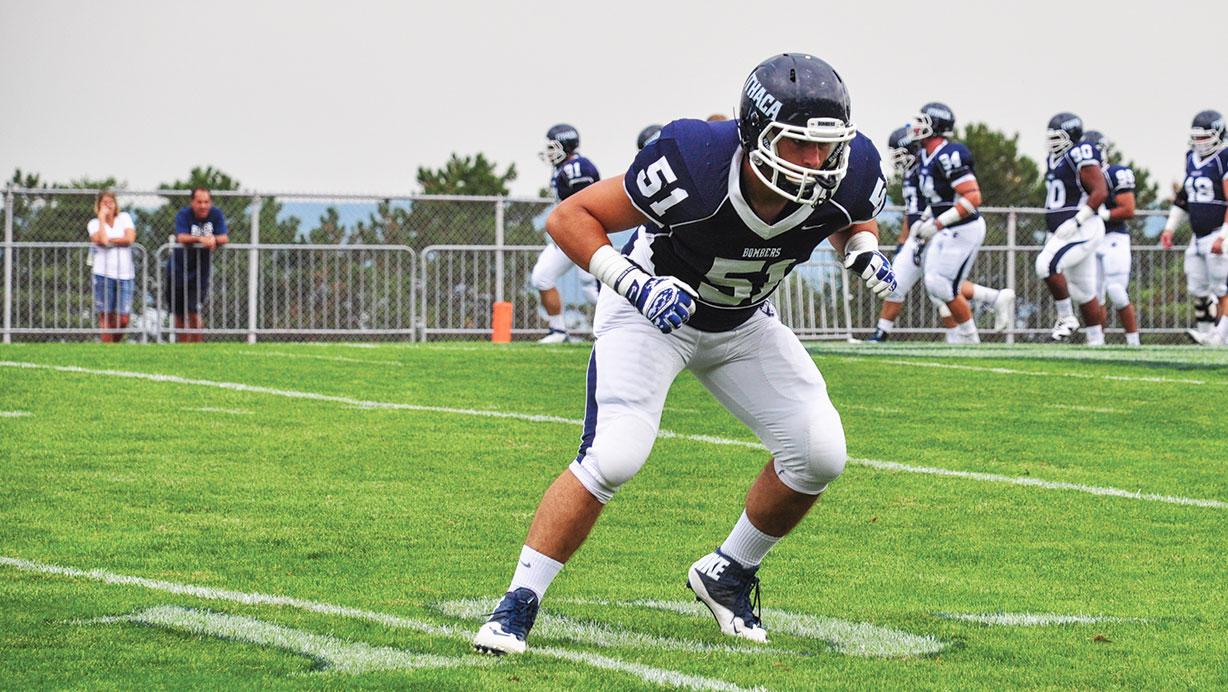 The Ithaca College football team has a 22-season history of winning under head coach Mike Welch, but in recent years, the team has been less successful. Coming off an underwhelming 2015 campaign that ended with a 4–6 record, the team is looking to get back in the business of what it has spent most of its time doing under Welch: winning.

Welch said that last season is the team’s rear-view mirror and that the team has no plans to repeat that performance.

“Every year is a new year, and we’re looking forward to playing the way we’re expected to,” Welch said. “We want to contend for an Empire 8 Championship and make a run at a national championship, the same as every year.”

Senior quarterback Wolfgang Shafer, who started eight games for the Bombers in his junior season, said the senior class’s experience with winning has put the team in a good position to get back on track.

“Freshman and sophomore years, we had some great senior leadership who led us to back-to-back Empire 8 titles, so as young guys, we learned what it took to be successful,” Shafer said.

Less than halfway through the season last year, the team would not have predicted it would finish the season with a record below .500 and not make the playoffs. The Bombers’ only four wins came in their first five games, and at one point, the team was ranked 19th in the nation on D3Football.com. Welch said he expects all of the returners to show improvement to have a more successful season.

Junior linebacker Kenny Bradley said defensive communication will be a key to having a successful season.

“We have to know what everyone else on the defense is doing at all times so that we can play together well,” Bradley said.

Welch said the offense has very high goals this year after facing all of the struggles it saw last year.

“Offensively, we didn’t have the year we feel we were capable of, but we have a lot of guys coming back this year, and there’s no substitute for experience, so we’ve set our sights high this year,” Welch said.

While the offense may have been a bigger problem for the South Hill squad last year, the defense was full of holes as well. Despite having Bradley, the 2014 Empire 8 Rookie of Year — along with First-Team All–Empire 8 Logan Murphy ’16 and junior linebacker Dan Loizos, 2015 All–Empire 8 honorable mention — the Blue and Gold allowed more than 15 points in seven of their 10 games.

Welch said the personnel he has this year on defense are well-suited for the style of defense he wants to run.

“Our defensive style is very aggressive: We like to try and take advantage of other teams’ weaknesses, and all of our returning guys fit into that,” Welch said.

Welch said he is excited about using Applied Performance Sciences as a way to make the team better.

“We’re always looking for ways to improve our performance and improve our mental outlook towards games,” Welch said. “We feel it has been very beneficial for us and other teams at Ithaca College.”

Regardless of how this season goes for the South Hill squad, when the final game of the regular season comes around, everyone will be looking for the Bombers to end the six-year losing streak in the Cortaca Jug.

Shafer said that, with the Blue and Gold’s last win coming in 2009, being able to bring the Cortaca Jug back to the South Hill as a senior would be meaningful for many reasons.

“Winning would mean the world to not only the team, but I want to win it for all of the guys who I played with freshman, sophomore and junior years who were never able to win a Cortaca,” Shafer said. “Personally, I also want to win because Ithaca and Cortland were the final two schools I narrowed it down to when I was deciding where I would go for college, so it would be great to go out with a win.”

The Bombers kick off their season at home at 1 p.m. Sept. 3 when they host Union College at Butterfield Stadium.

Quarterback Wolfgang Shafer leads the pack on and off the field