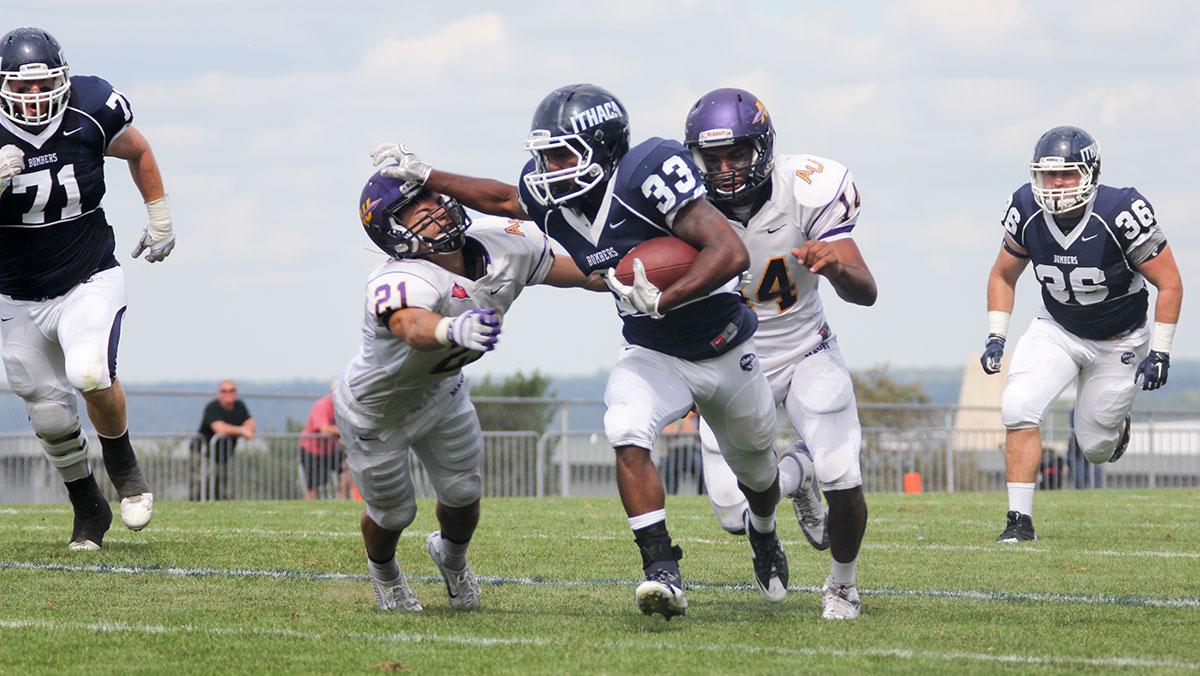 The Ithaca College football team continued its hot start to the season, defeating Alfred University by a final score 38–18 Sept. 23 at Butterfield Stadium. It moved the Bombers to 3–0 on the season and 1–0 in the Empire 8 conference.

The Bombers’ offense got off to a shaky start after junior starter Wolfgang Shafer’s first pass of the contest was intercepted on the Bombers’ 30-yard line by Saxons safety Liam Hobbins for his first turnover on the season.

However, the defensive unit came back and picked up its quarterback after forcing a turnover on downs by the Alfred offense and preventing the Saxons from scoring on the drive.

Neither of the teams’ offenses could establish a rhythm in the first quarter.

On the Bombers’ fourth drive of the day toward the end of the first quarter, Shafer tossed his second interception of the afternoon to Saxons linebacker Corry Wallace.

On the ensuing kickoff, sophomore defensive back Jordan Schemm returned the kick for 83 yards all the way to the Alfred 11-yard line. The kick return shattered Schemm’s previous career-high of 46 yards.

Soon after, Shafer threw a 6-yard touchdown pass to senior tight end Kyle Hastings in the left corner of the end zone to take a 7–3 lead.

After an Alfred punt, Shafer orchestrated an eight-play, 73-yard drive, which included a 26-yard strike to senior specialist Josh Oliver. The drive concluded with a touchdown run off the feet of sophomore running back Tristan Brown that extended the Blue and Gold’s lead to 14–3.

Oliver said the team needs to establish home-field advantage and be relentless throughout each possession of a contest.

“This is our home building,” Oliver said. “We want to solidify that nobody is beating us on our home field. [The game] was close at first, but we have to get down the field and make sure we score.”

However, the Saxons countered with a touchdown of their own when Saxons quarterback Tyler Johnson scampered for a 13-yard score with 33 seconds left in the half to pull them within four points of the Bombers.

The Bombers lead at halftime 14–10, despite Alfred controlling the time of possession. The Saxons held the ball for 16:47 while the Bombers held it at 9:23. The Alfred offense could only convert two out of 10 third-down conversions against the vaunted Bombers defense.

On the Bombers’ second drive of the third quarter, Shafer lobbed a 9-yard pass over the defender’s head to Oliver in the right corner of the end zone for a touchdown to make the score 21–10 in favor of the Blue and Gold.

Early in the fourth quarter, sophomore linebacker Kenny Bradley sacked Johnson in the Bombers red zone. However, it was called back for a taunting penalty, which gave the Saxons a first and goal opportunity at the Bombers’ 8-yard line.

On the very next play, Johnson zipped a touchdown pass to Joe Ryan to creep closer to the Bombers’ lead. Alfred converted on a two-point conversion to make the score 21–18 and pull the squad within a field goal of the lead.

On the Bombers’ next possession, Brown rolled around the right side, broke a tackle and spun off another defender as he exploded for a 64-yard touchdown to extend the Bombers’ lead to 28–18 and gave the team a little breathing room.

Brown said he simply followed his blockers en route to a career-long rush. Brown also said the offense expected a breakout performance in the running game.

On Alfred’s next drive, Bradley redeemed himself by intercepting Johnson’s pass and returning the pigskin 45 yards for the score and a 35–18 Bombers’ lead. It was the second straight week Bradley has sealed a Bombers’ victory with an interception.

Defensive coordinator Mark McDonough said Bradley has settled into his position and matured over the first two years, becoming a reliable threat on the field.

“He came running off of the field saying, ‘I told you I was going to get it back,’” McDonough said. “The least he could have done was cost us a touchdown and help us get a touchdown.”

The Bombers’ next matchup will be away against Utica College at 1 p.m. Oct. 3 at Charles A. Gaetano Stadium.