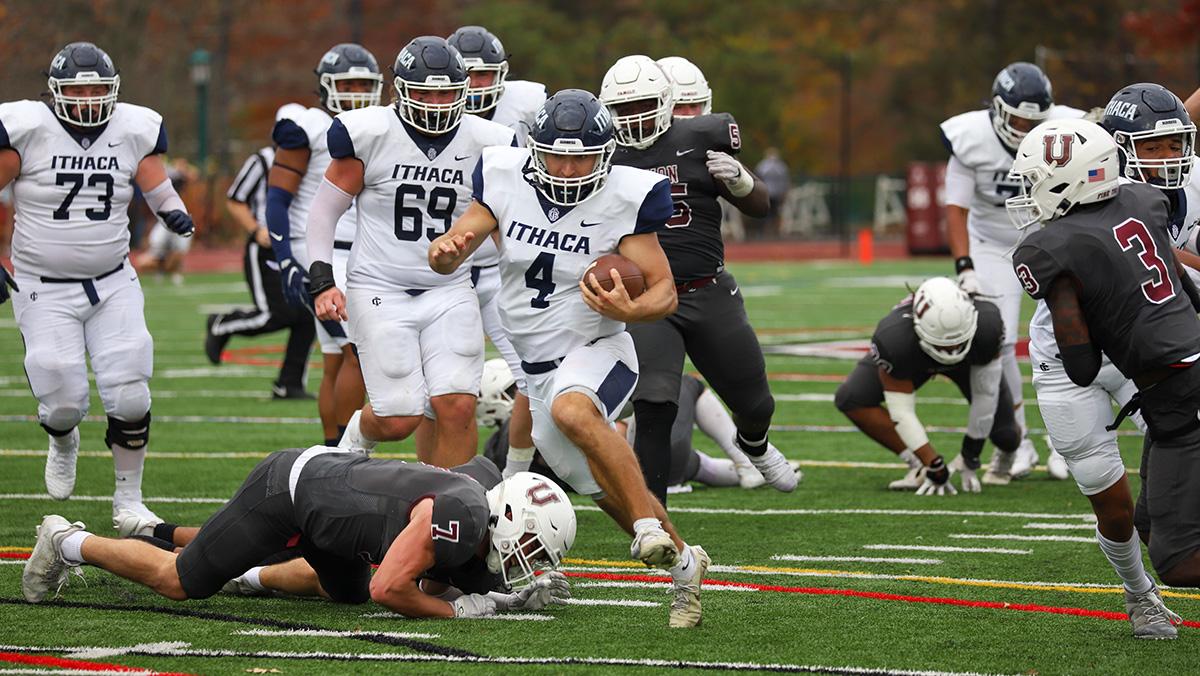 Nolan Saunders/The Ithacan
Senior quarterback Conner Hayes finds his way into the end zone for a Bomber touchdown in the team's win over Union College. The touchdown would give the Bombers a 28–21 lead that they never gave up with the 31–28 victory.
By Tommy Mumau — Senior Writer
Published: November 5, 2022

Head coach Michael Toerper said he was pleased with how the team competed during the contest, battling back to win the league championship after facing a 21–14 deficit at halftime. 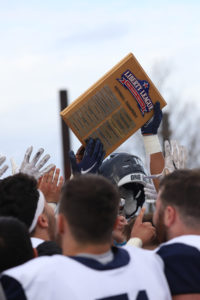 “It means so much to these players because they’ve worked so hard for this moment, and they deserve it because of the work that they paid forward,” Toerper said. “We’ve never trailed … ever in a game this year and our ability to stay together, stay focused, stay poised and just keep playing was just a testament to them, and I’m just so proud of them.”

The Bombers’ offense rose to the occasion, posting 173 rushing yards and 153 passing yards. The team turned to several players to make an impact in the contest, as senior quarterbacks A.J. Wingfield and Conner Hayes, junior running back Jake Williams and junior wide receiver Sam Kline each scored touchdowns.

Union delivered a strong effort against the South Hill squad’s defense, logging 208 passing yards and 194 rushing yards. The college received some solid defensive performances in the contest, as senior linebacker Jason Haber had seven tackles and junior defensive back Tommy Moran and senior linebacker Matt DeSimpliciis each had six tackles.

The Bombers struck first with 10:37 remaining in the first quarter, taking an early 7–0 lead against the Dutchmen. The college made a statement in the opening drive, moving the ball 98 yards down the field in nine plays. The drive was capped off with a five-yard touchdown rush by Wingfield. Senior kicker Nicholas Bahamonde followed this with a successful extra point attempt.

Union responded as the first quarter was nearing its close, tying the game at 7–7 with just 0:17 to go in the frame. Senior quarterback Donovan Pacatte evened the score by completing a screen pass to senior running back Ike Irabor, who ran into the right corner of the end zone for a 16-yard touchdown. Junior kicker and punter Andrew Lau then converted the PAT.

The Dutchmen kept their offense going with 9:38 left in the second quarter, taking a 14–7 advantage. The Bombers faced their first deficit of the season after Pacatte hustled past the goal line for a 27-yard touchdown rush. Lau’s extra point attempt sailed through the uprights.

The South Hill squad answered back with 7:05 to play, knotting up the game at 14–14. Williams found the end zone by running up the middle for a one-yard touchdown. Bahamonde then delivered a successful PAT.

Union reclaimed the lead with 3:10 remaining in the first half, making it a 21–14 ballgame. Pacatte completed a pass to junior tight end Garrett Cafaro, who ran into the middle of the end zone for a 23-yard touchdown. Lau’s extra point try was good. This would be the score as the game entered halftime.

The Bombers wasted no time tying the game at the start of the third quarter, advancing the score to 21–21 with 11:07 to go. Wingfield completed a 12-yard touchdown pass to Kline in the left corner of the end zone. Bahamonde followed this with a successful PAT. 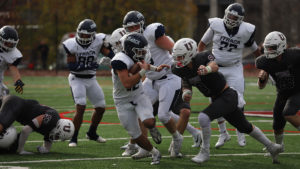 The South Hill squad went back in front with 0:32 left in the third, taking a 28–21 lead over Union. Hayes ran toward the left of the end zone for a 22-yard touchdown. Bahamonde then converted his fourth extra point of the afternoon.

Hayes said he was happy to come through with the go-ahead touchdown, and he was grateful to his teammates and coaches for putting him in a position to do so.

“[Offensive coordinator Sean Reeder] always has belief in me that when I go out there, I’m going to do my thing,” Hayes said. “Jake Williams had a great lead block out there …  [and then] just go in the end zone [and] party with my boys, it was really special.” 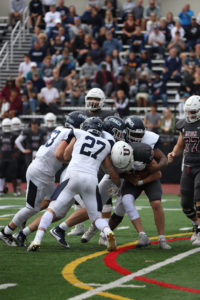 The Bombers then put a few more tallies on the board with 11:25 remaining in the fourth quarter, extending their lead to 31–21 against the Dutchmen. Bahamonde powered a 35-yard field goal through the uprights.

Union didn’t go down quietly though, narrowing the South Hill squad’s lead to 31–28 with just 0:10 left in the contest. Pacatte completed a 10-yard touchdown pass to Irabor in the right corner of the end zone. Lau’s PAT was successful.

Prior to the touchdown, the Bombers had kept the Dutchmen off the board since the second quarter. Senior defensive lineman Jordan Sosa had three tackles in the contest and said he was impressed by how the team bounced back, and he expects the team to maintain this resiliency through the remainder of the season.

The squad was ultimately able to hold on and secure the victory. Toerper said he has enjoyed his first year at the helm, and he is proud of all the group has accomplished thus far.

“It’s a group that will be remembered forever, and now we get to have a reunion 20 years from now when I’m 56 years old and I can’t wait,” Toerper said. “No one can ever take that from these guys, they’re champions and they deserve it.”

The Bombers will close out the regular season in the 63rd Cortaca Jug, as the team will take on the SUNY Cortland Red Dragons at noon at Yankee Stadium in the Bronx, New York.