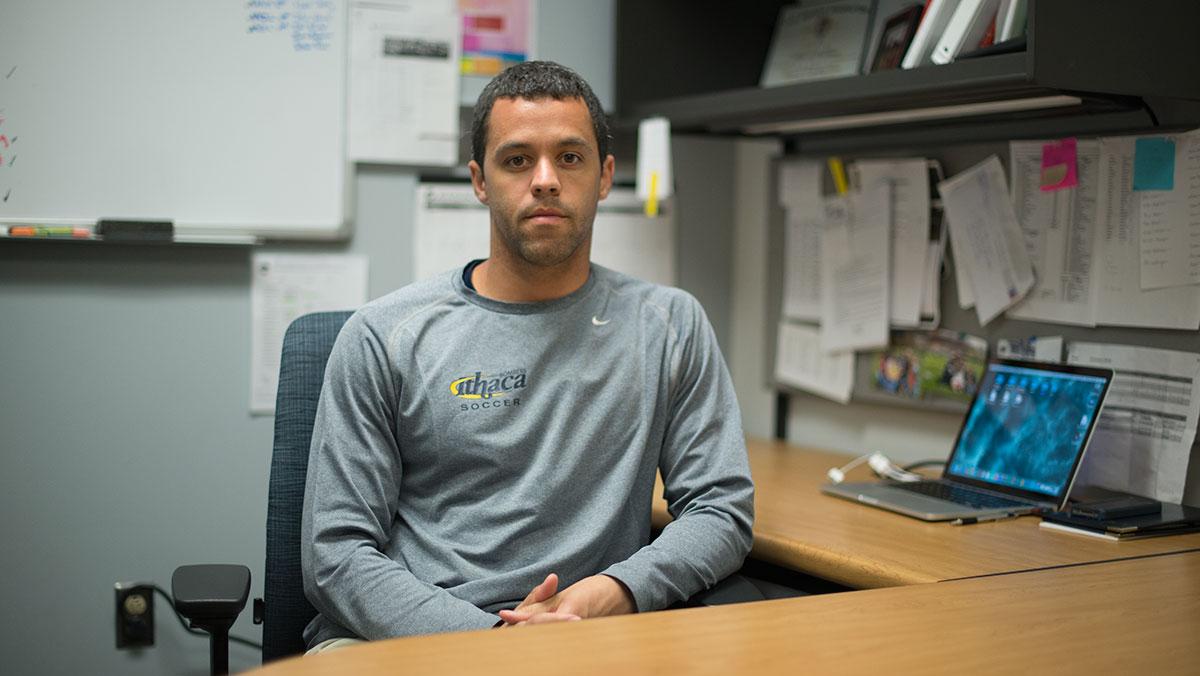 Tommy Battistelli/The Ithacan
Patrick Ouckama, an Ithaca College graduate of 2005, was named the head men's soccer coach April 15 to succeed Andy Byrne as the leader of the program. He was an assistant coach for the team in 2014.
By Jonathan Beck — Assistant Sports Editor
Published: April 20, 2015

Patrick Ouckama ’05 was hired April 15 to take over for Andy Byrne as head coach of the men’s soccer team beginning Fall 2015. Ouckama attended the college from 2001–05 and played on the team for all four years as a starter. He moved on after college to play professionally and has gained extensive experience in coaching through several soccer academies. He served as an assistant coach for the 2014 season, the first full-time assistant coach the program has ever had.

Assistant Sports Editor Jonathan Beck spoke with Ouckama about his reactions to being hired, his relationship with Byrne and what he hopes to achieve during his time at the college.

Jonathan Beck: What was your initial reaction when you first found out about the job?

Patrick Ouckama: Initially, just very excited. The interview process was long. It was challenging. There were a lot of good candidates applying for the position — so relieved, excited. I went and told my father right away, and he was the first person I told. He’s been watching me play since I was a kid, and he watched me play here for four years, so he was the first one. He was excited, very excited. He still lives in the area, so he’s gearing up to come to more Ithaca College Bombers games.

JB: Andy Byrne was here for 31 years. What type of influence did he have on you?

PO: From a young age, he’s had an influence on me. I’ve known him since I was a youth player in the area. I grew up here, and then I ended up coming here and played for him for four years and then was able to work beside him for a year. The biggest thing was just being true to the program itself and having loyalty to the program … It’s a challenging job at times, of course, but I think the most important thing I learned from him was keeping your eyes on the kids and the program itself, and you can’t go too wrong if you are on that track.

JB: How will you try to build the same legacy that he did coming in as a young coach?

PO: The same legacy, those will be big shoes to fill. I think more along the lines of staying true to the program and doing the best job I can and getting these guys on the same page, tactically, and developing them as young players and young men. And I think if I can do that in the way that Andy Byrne did it for 31 years, then I could call myself successful at the end of the day no matter how long I am here.

JB: What type of relationship have you had with the other head coaches here so far?

PO: I’ve had a lot of handshakes and congratulations the last couple days. It’s a fantastic athletic staff, and I’m very lucky to be a younger coach on this staff because there is a lot of experience here from Coach Welch, Coach Val, Bill Austin, Andy Byrne. Taking a step out the door, there’s a ton of experience here. Mindy Quigg has been here a long time, so to learn from them, to be able to bounce ideas off of them — Jim Mullins is another one — to be able to go to them and ask them questions, “Hey, here’s my situation or here’s the situation with this team.” And for them to have 10, 20, 30 years of experience to give me that advice, that perspective, is something that I’m looking forward to, and it’s something I don’t think a lot of coaches in the country will have. Not a lot of the coaches will be able to look around at the staff of the athletic department and have that kind of experience to look to and those leaders in the same room.

JB: What philosophy have you developed over the years as a player and an assistant coach that stays true to your perspective about this team?

PO: First, one of competition. It’s going to be tough for these guys moving forward. We have a lot of strong recruits coming in, and I like to create a culture of every practice is a competition. We can do a lot as coaches in terms of training and developing players, but there is little that can substitute a guy nipping at your heels trying to take your starting spot, and I think the guys are going to battle for everything they get, and I think that is going to make us a strong team moving forward.

JB: As a former Bomber, what is the one thing you want to bring back to this program?

PO: I want to create a culture of winning for these guys. I want them to look at everything they do from packing their bag in the morning, to what time they are going to be in at night. And I want them to prioritize their lives as young men, as young college students and make quality productive decisions from start to finish. And I think if I can create that type of culture within the team, we are not only going to have success on the field, but I think we are going to develop some fine young men as well.