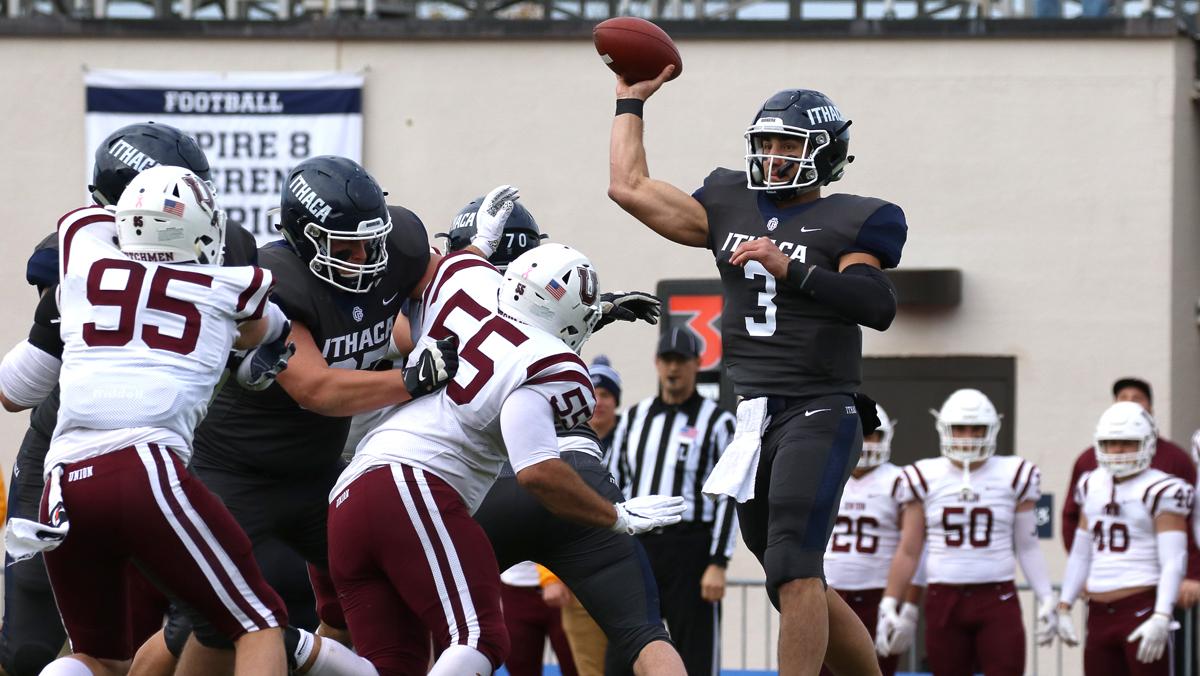 After the Ithaca College football team stepped off the field following the Eastern Collegiate Athletic Conference Bowl game Nov. 23, 2019, then–senior quarterback Joe Germinero was not sure if his football career was over. Now, he will play his next game on May 2 on a different continent.

Germinerio signed a one-year contract to play quarterback for the Kiel Baltic Hurricanes of the German Football League (GFL). The league was founded in 1979 and currently has 16 teams separated into two eight–team conferences. The Hurricanes are in a conference that has teams in cities like Berlin; Hamburg, Germany; and Dresden, Germany.

Germinerio said that he knew of competitive football in Europe but was not familiar with the GFL until he came to Ithaca College. He then made a Europlayers account, reached out to several coaches and said he felt the Hurricanes were a perfect fit.

“It was on my mind from the beginning of the season that I could possibly play overseas,” Germinerio said. “I felt it was a great opportunity because I played my last collegiate game in November and then played in two bowl games after the new year, so it’s not like I am unfamiliar with being on a football field.”

Germinerio spent a year at the University at Albany and played as the starting quarterback for The College at Brockport for three years. He transferred to Ithaca College for just the fall semester after graduating from Brockport in Spring 2019 to use his last semester of eligibility. He also led the Bombers to victory at the 61st Cortaca Jug game held at MetLife Stadium.

Germinerio said this opportunity allows him to do something he was never able to do during his college experience: live in another country.

“I figured, ‘What will be a better time to do it than now?’” Germinerio said. “From being a kid who never really studied abroad and was always so focused on football here in New York state to now getting to go to a new country and see all the amazing and beautiful things in Germany and also seeing other countries when I have downtime. This, combined with being able to play the game I love, makes the decision easy.”

The league uses a rulebook very closely aligned with the NCAA. The only differences are that the quarters are 12 minutes long and the teams play 14-game seasons. Germinerio said the similarities made the league more appealing to him than trying to go to the Canadian Football League, which has more rule variances.

“We’re playing American football in Germany, and you have to love that,” Germinerio said. “All it is is that we are playing football again. We are on a different field, but everything else is the same, and that is just a great and beautiful thing.”

Germinerio said he plans to at least stay in the GFL for the full season, which will last until September or October depending on how the team performs in the playoffs. After the season, he is currently undecided about where to go next but said he believes the experience abroad will allow him to figure out what his options will be.

Freshman quarterback Andrew Wingfield said Germinerio helped him adjust to being a college athlete and believes he will translate well to the professional level.

“I’m so happy for Joe, and I know his work ethic and preparation will carry him anywhere he goes,” Wingfield said. “Joe really took me under his wing and went out of his way to help me every single day. He is undoubtedly one of the best people and teammates I’ve had, and I know he will continue to leave the same impression on others. I’m confident that he’s going to do great and have a long playing career.”

Susan Bassett, associate vice president and director of the Office of Intercollegiate Athletics, said athletes at Ithaca College who move to the professional level, like Germinerio, exemplify the professional atmosphere the college gives its students.

“Ithaca College is about excellence in all things,” Bassett said. “To me, athletics is an extension of our institutional excellence, and, when a student can thrive here … and move to the professional level, it reflects who we are as an institution.”

While moving to a new country will be a huge change for Germinerio, he said he hopes that it helps him grow as both a football player and a person and that it will help him find a career within football after, whether it be as a player or in coaching.

“I’ve never been afraid of change as my college career shows,” Germinerio said. “I’m going to go in and try to embrace my new coaches and teammates just as I have done everywhere else. I want to be a good ambassador and leader and also a great teammate and person overall.”