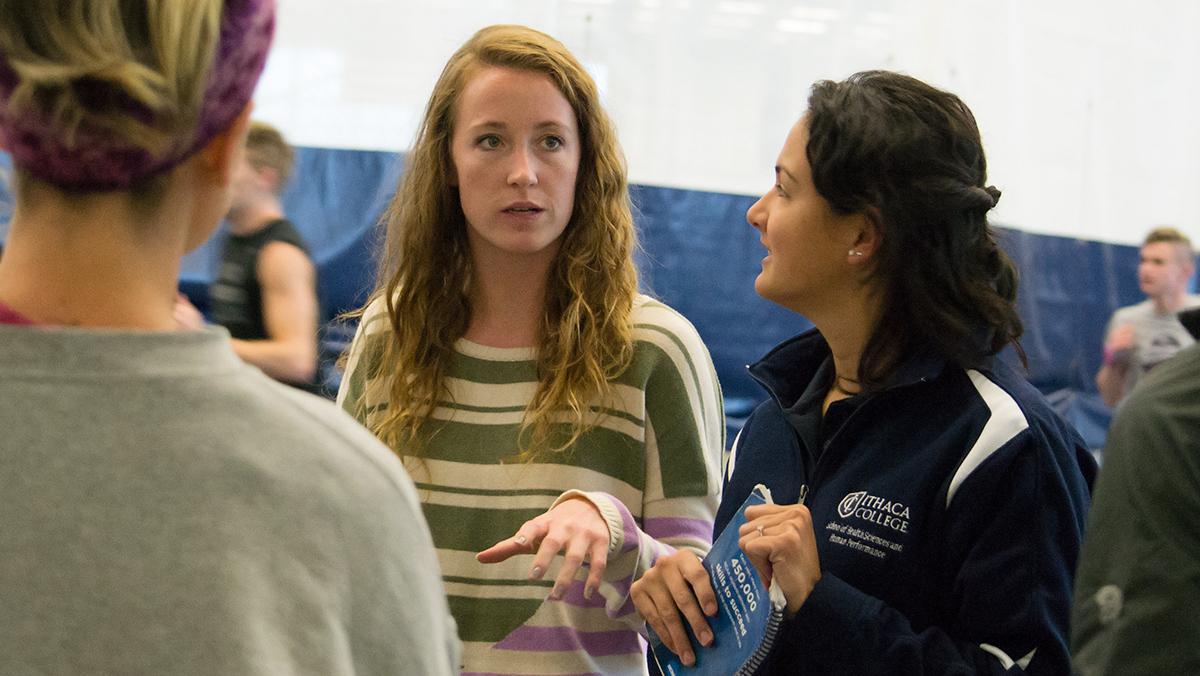 Two years ago, Alexa Rick and Meghan Cass were running through South Hill as members of the Ithaca College cross-country team. Now, the two graduate students and previous teammates are working together again to coach their former team.

Along with part-time assistant coach Ally Bartkowiak ’14, Rick and Cass — sixth-year physical therapy students — stepped up to fill the place of cross-country head coach Erin Dinan, who left this summer on maternity leave.

Though Dinan is still the head coach, Bartkowiak, Rick and Cass currently run the day-to-day operations of the team. Rick said she was not nervous when she was asked to take over the team.

“I didn’t feel any pressure, more so just pure excitement to have the opportunity to help Erin and the team,” Rick said. “Going into it knowing that I would have the help of Meghan, Ally and even the men’s coaching staff gave me a sense of ease going into the temporary transition.”

Despite the coaching switch, the Bombers have not missed a beat. They placed in the top five at all but two of their invitationals this season and won their 14th consecutive Empire 8 Championship on Oct. 29.

During her four years of running cross-country, Rick earned many honors, including making the NCAA All-Atlantic Region Team, the Empire 8 First-Team All-Conference, the United States Track & Field and Cross Country Coaches Association All-Academic team and the Empire 8 President’s List. After graduating, Rick said, she joined the team as an assistant coach to help Dinan.

“Coaching was one of my minors in undergrad, and I’ve always been interested in training philosophies,” Rick said. “Once I was still going to be around for two years for grad school, I figured I’d reach out and see if she needed any help.”

During her first year, Rick said, she was coaching girls she had run with for three years.

“Last year was really weird because I had run with pretty much all those girls, except the freshmen,” Rick said. “I didn’t have to do as much because Erin was there all the time, so I was backup for her. But I was definitely a little bit more hesitant to give my input just because I wasn’t sure how it would be received.”

As the season progressed, Rick said, she began to feel more comfortable answering questions about the workouts and training plan.

A year later, when Dinan left, Rick, along with Cass and Bartkowiak, decided to fill in. The three coaches had been on the team together for four years, giving them plenty of time to learn how to communicate, so splitting up the work isn’t difficult, Cass said.

Dinan, who was pregnant with her first child when she left, said leaving the team was made easier because she knew she was leaving it in the hands of her former athletes.

“It was hard to step away and to leave it in the hands of those three people. … It has been the best–case scenario,” Dinan said. “The team has been doing so well. I’m starting to think I should go away more often.”

Rick said she manages workouts, pacing and practices; Cass does paperwork and plans trips and logistics; and Bartkowiak deals with anything else that comes up.

“We’ve all been surprised about how well it’s gone, but I think it’s just because we anticipated —  we knew when the change was going to happen, and really prepared for that,” Rick said. “So the whole season has been planned out, and we just have to carry it out.”

Over the summer, Dinan and Rick created training plans for the entire season. Cass said that, even with a one-month–old son, Dinan finds time to FaceTime in to talk to the coaches.

The team has not been hindered by the change in the coaching staff. Senior runner Kristin Lynn said Rick’s decision to let the girls run workouts based on how their bodies are feeling that day, as opposed to set paces and times to hit, has helped the team get faster.

“This year, she’s done a lot of training by feel, like, ‘You know what this should feel like. Trust your gut,’” Lynn said. “I think it’s been really beneficial because a lot us have been able to push ourselves further than we could have with set paces.”

Graduate student Tina Gibble said she feels Rick is an essential part of the team because of both her caring nature and her background.

“She comes from a place where she’s been on this team for four years, and she’s seen it grow, and she sees what we’re capable of, so she’s just as passionate as we are,” Gibble said.

Both Lynn and Gibble ran with Rick while she was on the team. Lynn said they feel there haven’t been any drawbacks to having a coach who has been their teammate.

“She was someone to look up to, and I think that’s carried over as a coach,” she said. “It helps having seen her success as an athlete. I trust in her judgment because I’ve seen how successful she was.”

Though she’s no longer a runner, Rick said she still has something in common with the team: She’s still a student. She said she found balancing her work had its ups and downs and that it mainly became stressful while the team was traveling or when she had big exams.

But her situation, as stressful as it is, has helped her athletes. As a physical therapy student, Gibble said, Rick understands the workload of graduate students. Gibble said Rick’s ability to grasp the difficulties of the two graduate students on the team made the season easier for the busy fifth-years.

“She understands the struggle of being a student-athlete in one of the hardest programs,” Gibble said. “If there’s a day where I’m very overwhelmed with schoolwork, she understands if I need to run on my own, or if I show up to practice a few minutes late or if I seem a little off, she understands why.”

As the cross-country season comes to a close, the team looks forward to next year. Rick and Cass will graduate, along with four seniors. The two graduate students will have used their eligibility up, but Rick said this year will prepare the team for the future.

“We’re going to have a lot of returners, and the girls are going to be just as successful, or more successful, next year because they will have had so many girls who had this year’s experience and will carry that to build for next year,” Rick said.