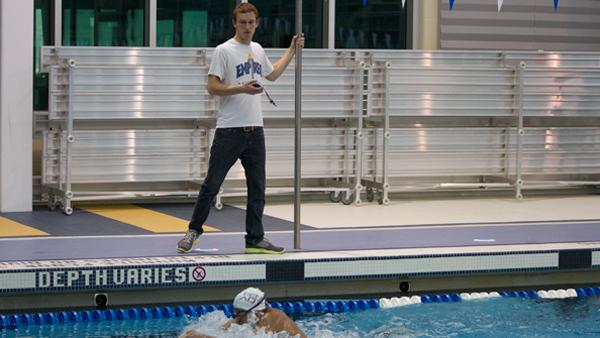 For Assistant Coach James Sica, staying away from the Bombers men’s swimming and diving team was not an option, even after graduating. Sica swam for the team for four years and became captain his senior year, which helped Ithaca College win two back-to-back Empire 8 championships.

Once he graduated from the college, Sica sought out jobs in many fields. Time spent pursuing a job proved fruitless, he said, so when he heard of an assistant coaching position he could not resist applying. Sica said he wanted to coach so he could inspire swimmers to love the sport as much as he does.

He did not always love swimming though. When he began swimming at the young age of eight, he said he just did not like sports. It was not until a few years later he fully appreciated swimming. Sica learned to appreciate the competition, and all the laps and hard work he had to put into the sport paid off.

He discovered that swimming was the perfect fit because it was something that he did not have to be overly coordinated for — which he claims he isn’t — and it fit his attitude of wanting to work hard.

“I love swimming because, generally, the people who work the hardest succeed and get better,” Sica said.

And work hard he did — a trait that did not go unnoticed by his coaches and teammates. Head Coach Kevin Markwardt said Sica has excelled in his position thus far because of his work ethic.

“The two things you want in a coach are someone who works hard and knows everything about the program,” Markwardt said. “He was an extremely hard worker. Nobody can throw back at him. We have had great swimmers that weren’t great workout swimmers come back and be coaches. The [athletes] say ‘I’m not gonna take your shit because you didn’t walk the walk now you are trying to talk the talk.’ But with him that hasn’t been a problem.”

The team Sica is coaching now is full of players that he has competed with as an athlete. His work ethic earned him the respect of teammates as a swimmer, and his passion for the athletes is earning him respect as a coach.

“I would say he is the best assistant coach I’ve ever had. It’s awesome to have a coach who wants you to do well as much as you do,” Sica’s former roommate and current senior captain Jake Robbins said.

The team has a long five-month season, and it does not normally train for the dual meets to conserve energy, waiting to peak at the championship meets. This training routine occasionally leads to mixed results. According to Robbins, Sica has been especially helpful in keeping the team optimistic during those times.

“You need some outside motivation, and James has done an awesome job mixing staying optimistic while keeping it real and letting you know what you have to do,” Robbins said.

Even with how well Sica has done with the team this year, he said he still may not stay on for a second year as assistant coach.

“I mean it’s gonna be really hard to leave this program because I was a part of it as a coach.” Sica said. “I’ve had 14 years of a life almost centered around swimming, and I want to see if I leave it, if I really miss it and wanna come back — we’ll see.”