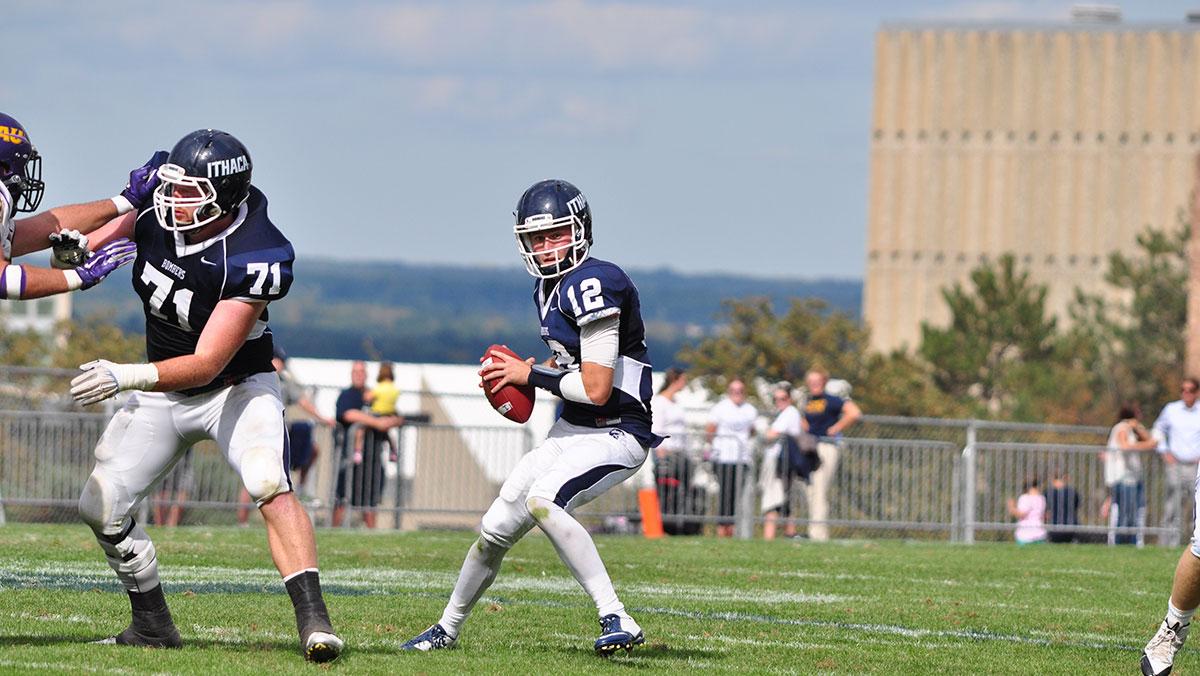 Sam Fuller/The Ithacan
Junior starting quarterback Wolfgang Shafer takes back the snap during the football team's game against Alfred University on Sept. 26 at Butterfield Stadium. The Bombers will look to go 4–0 on the season as they take on the Utica College Pioneers on Oct. 3 in Utica, New York.
By Dustin Albino — Contributing Writer
Published: October 2, 2015

Sophomore running back Tristan Brown is coming off of a career-high 176 rushing yards against Alfred University on Sept. 26. The longest run on the afternoon came when Brown broke several tackles on a touchdown run of 64 yards.

Heading into the matchup, Brown had only run for a combined 56 yards in the Bombers’ first two games. To go along with the big rushing game, he contributed to the point total. Brown rushed for two touchdowns and was the spark that they needed to control the Saxons.

Brown has moved up to fifth in the Empire 8 Conference in rushing and will look to pad his stat totals this weekend against Utica College and propel the Bombers to a 4–0 start.

The core four on the defensive line are coming off of a game where they only let up 75 yards on the ground to Alfred. The Bombers’ defense on average has given up 114.5 yards per game so far this season.

With the recent success of pressure in the backfield, the defense has built some momentum and not allowed the opposing team to capitalize with the ball. The defense has forced 10 key turnovers, which has directly shifted the game in several ways.

The Bombers will look to continue that streak at Utica where the Pioneers are averaging over 170 yards on the ground.

Shafer has thrown for 573 yards, with an average of 191 yards per game, and has connected on five touchdown attempts, throwing just two interceptions.

He will see a new look as the Bombers square-off against the Pioneers. Utica is second in the league with 11 sacks in the young season. With a 2–2 record for Utica, the Bombers should be ready for all different sorts of scenarios in facing the tough Pioneer defense.

Bring on the Pioneers

In 2014, the Bombers defeated the Utica Pioneers 27–10 with the win moving the Bombers to 4–0 on the season. Similarly, the Bombers are heading into the Oct. 3 game with a 3–0 record. Last season, the Blue and Gold were ranked No. 13 at the time of the game. This season the Bombers have a young, rejuvenated defense looking to continue its hot start.

Last weekend’s win against Alfred vaulted the Bombers to a conference opening win. The team heads into Saturday looking for a 2–0 start in conference play and setting Utica back to a 1–2 conference record. Utica has struggled to gain offensive power and currently sits with a .500 win percentage at 2–2.