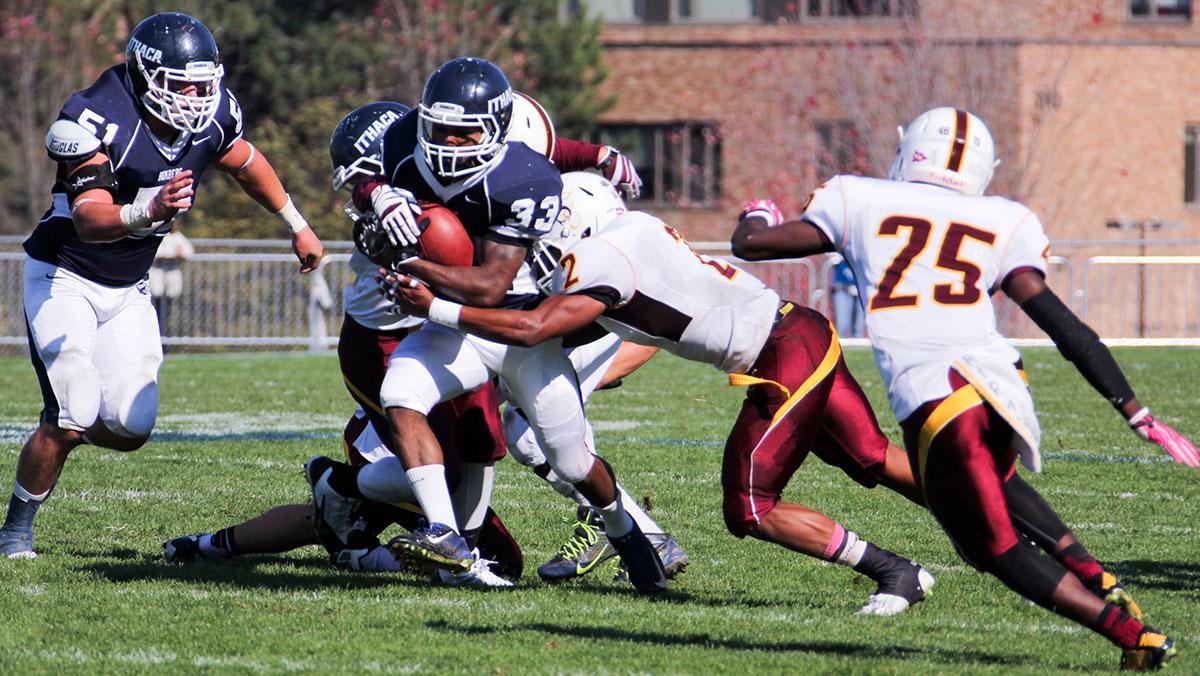 Caitie Ihrig/The Ithacan
Freshman running back Tristan Brown runs with the ball while a Salisbury University defender tackles him during the football team's 32–7 win over the Sea Gulls on Oct. 25 at Butterfield Stadium.
By Christian Araos — Senior Writer
Published: October 31, 2014

The Bombers defeated Salisbury University and Utica College defeated Buffalo State College, completing half of the required scenario needed to set the Blue and Gold up with a chance to clinch the automatic bid to the NCAA Tournament. The general playoff scenarios are further explained below, but another Bomber win and Bengal loss completes the most direct scenario for the Bombers. The Blue and Gold will look to do their part against a Golden Eagles team that has proven itself in its first season in the Empire 8.

The Golden Eagles have the second most yards per game average in the conference and are on a three-game winning streak. However, they needed last-minute defensive stops in each of their last two games. Against Alfred University on Oct. 18, Brockport — up by 10 with 1:36 remaining — allowed the Saxons to drive 73 yards in five plays for a touchdown, recover the onside kick and get close enough to attempt a last second pass to the end zone. Last week, the Golden Eagles took a 17–6 lead in the third quarter against the Hartwick College Hawks but went three-and-out in their final three possessions. This allowed the Hawks to cut the deficit to five and drive to the Golden Eagle 7-yard-line before forcing an incomplete pass on a fourth and one with fewer than 20 seconds remaining. You can spin this as the Golden Eagles having a “bend, but don’t break” mentality or the team simply not having the mental focus and stamina to deny its opponents a chance of stealing a win.

After junior quarterbacks Ty Stoldt and Wayne Bonsell suffered long-term injuries, the Golden Eagles turned to junior Chase Venuto to lead their offense. Venuto is an Ithaca High School graduate with a father and grandfather who have each played in the NFL. He has had mixed success in the five games he has played, completing under 55 percent of his passes with nine touchdowns and seven interceptions. Head coach Mike Welch admitted to gauging Venuto’s interest when he was a senior in high school, but found Venuto wanted to leave Ithaca.

“Venuto is a fine young man,” Welch said. “He chose to go to Brockport, and most kids want to get out of town.”

As Brockport’s recent form shows, Venuto does not need to be outstanding for the Golden Eagles to have a chance of winning. He has the conference’s leading rusher, sophomore running back Dan Andrews, in the backfield and the conference’s third-leading receiver, senior Andrew Mrzoek, who functions as the Golden Eagles’ offensive threats. Mrzoek is a vertical threat that can be contained by disciplined pass defenses. Andrews is the more consistent player, rushing for at least 100 yards in all but two games this season. If the Bomber defense has really turned a corner as defensive coordinator Mark McDonough suggested after last week’s game, they will not allow individual playmakers to burn them like they did in their two losses.

While this is a fascinating passing matchup, the Bombers’ running back situation is what will serve as the pivotal factor behind how the offense operates. The South Hill squad’s first three running backs are all fighting injuries. Senior Tommy Padula and sophomore Shawahl Abdur-Rahman will not play, while freshman Tristan Brown was very limited in practice on Thursday. The injury situation now leaves juniors John Iannone and Theo Ekyior as the running backs who would feature on Saturday. Though Heasley acknowledged Iannone’s and Elkyior’s success on the junior varsity level, he added that the injuries are going to force him to line junior wide receiver Josh Oliver in the backfield more often.

“We’ve tried to get him more touches all year,” Heasley said. “With the backs that we’ve had, we had to pick and choose where we put him in, but certainly his role grows right now as well. He’ll play a little tailback, he’ll lineup in the backfield and motion into empty and do the things we do, and we tried to get a little wildcat in.”

Can Fisher Do Its Part?

St. John Fisher College (6–1, 4–1) is now the only Empire 8 team with fewer than two losses. The Bombers need that to be the case after next week if they want to have a direct shot at the automatic qualifier. The Cardinals host Buffalo State (5–2, 3–2) at noon and could give the Bengals their third conference loss, all but eliminating them from conference contention. A Bengals win does not eliminate any team, but it means Ithaca cannot clinch a playoff place next weekend on its own. The Bombers still need another Bengal loss.

As for the Cardinal-Bengal game itself, the game will be decided by the Bengal defense. As we saw on Oct. 11 at Butterfield Stadium, it has the ability to change the game by forcing turnovers, but it can be porous. They lineup against Cardinal senior quarterback Tyler Fenti, who has yet to throw an interception this season. If Fenti and the Cardinals can play mistake-free, they should be able to pull away from an increasingly inconsistent Bengal offense.